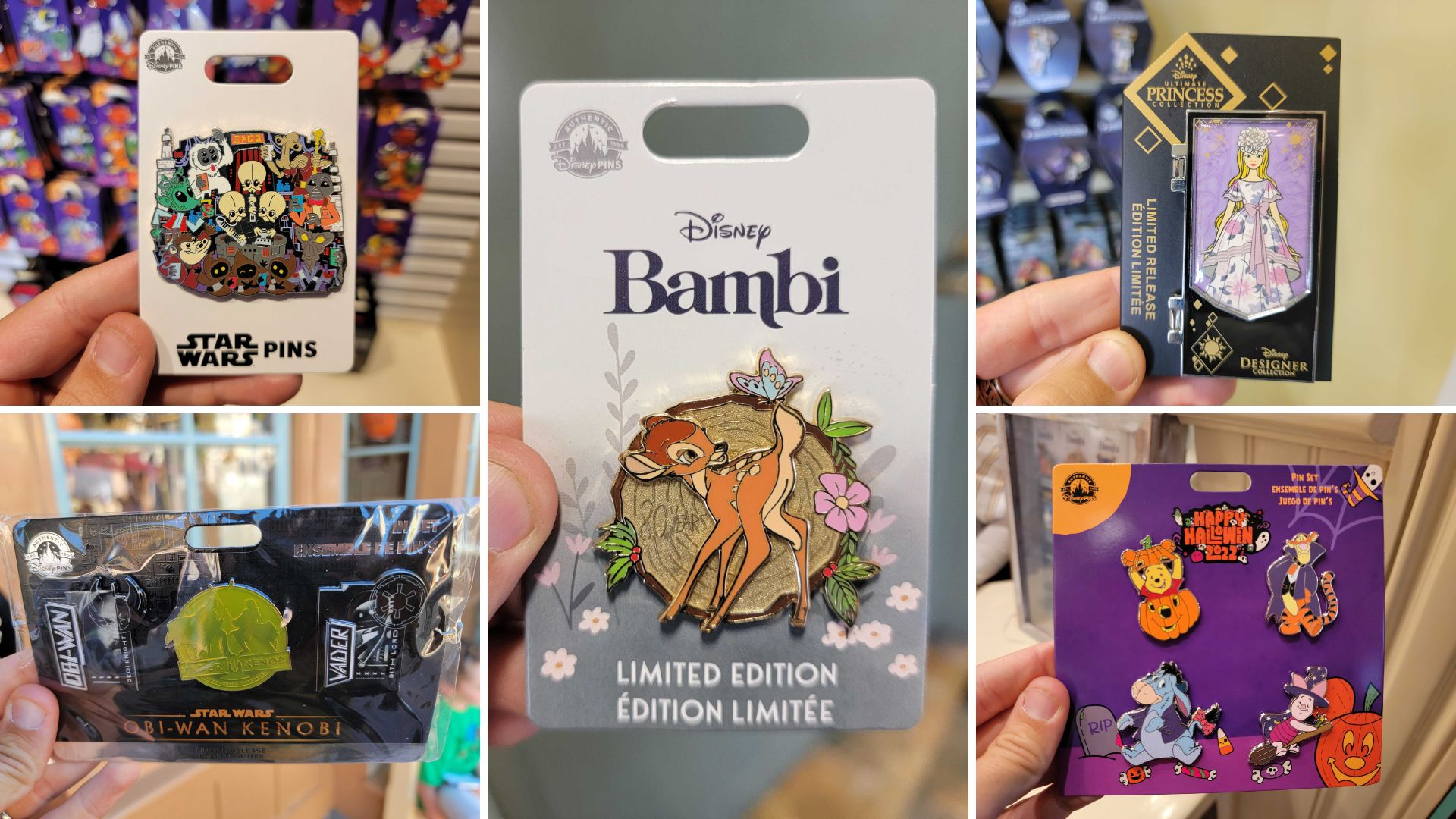 Mickey is dressed in a blue night sky-inspired outfit on this pin inspired by Peter Pan’s Flight, part of the Mickey Mouse: The Main Attraction collection.

This Character Gift Boxes pin is inspired by the “Zootopia” characters, and includes a carrot pen, Zootopia PD badge, red popsicle, and sunglasses.

This new Princess Tea Party double pin is inspired by Snow White. The teapot resembles her yellow, blue, and red dress, with a wooden handle. The teacup is brown with blue and red accents, sitting on a light brown saucer with white flowers. They are connected by a silver chain.

This pin features Bambi with his mother and father.

This pin resembles a “Bambi” movie poster in a frame made of sticks. An 80th anniversary medallion is in one corner.

This pin spins, showing Bambi, Thumper, and Flower as adults on one side and as kids on the other.

It also has an 80th anniversary medallion at the bottom.

Young Bambi looks at a butterfly on his tail on this pin.

The packaging includes information about the designer, Tetsunosuke Saiki.

The above pins were all at Pin Traders.

Mickey is dressed as a jack-o’-lantern full of candy on this pin.

Minnie is dressed as a purple cat.

Sleeping Beauty Castle is dark purple-blue and surrounded by skulls, ghosts, and other spooky imagery on this pin.

Donald is dressed as a piece of candy corn, looking spooked by a second pin of a ghost wearing Mickey ears.

Daisy has a spider-inspired outfit, with spiders hanging from her spiderweb sleeves.

Goofy is dressed as a spooky orange tree, and also has a spider hanging from him.

Pluto peeks out of a purple cauldron.

Winnie the Pooh, Tigger, Eeyore, and Piglet are all ready for trick-or-treating in this pin set.

Obi-Wan is silhouetted with his lightsaber on this red-orange pin.

This large pin has several characters gathered around the “Star Wars” Cantina band from “A New Hope.”

This pin reads “Happy Halloween” above several cartoon-ish images of Marvel heroes Black Panther, Spider-Man, Iron Man, Ant-Man, and The Wasp. Candy and bats are around them.

Thanos, the Green Goblin, and Loki are “Creepin’ it real” with candy on this pin.

Each pin features a different Haunted Mansion character in black and white.

The characters include the Hatbox Ghost, Hitchhiking Ghosts, Bridge, and Caretaker.