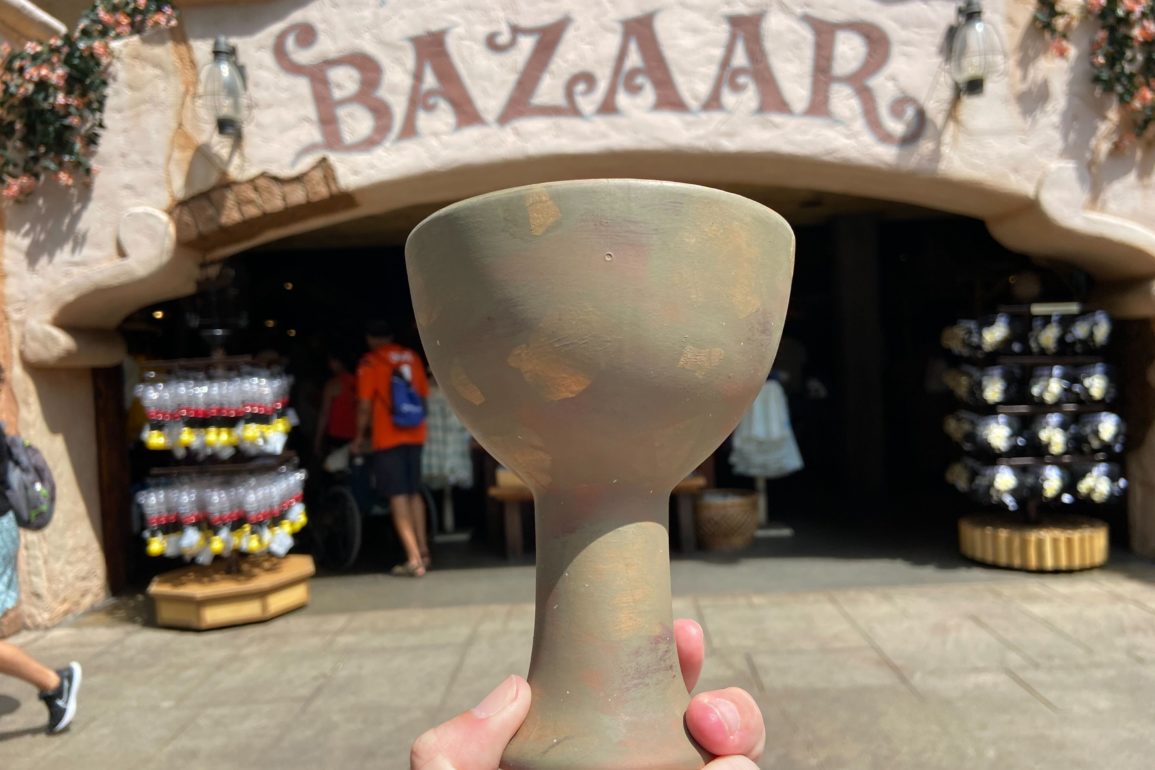 Guests at the Disneyland Resort can choose wisely now that replicas of the Holy Grail and crystal skull from the “Indiana Jones” films are available!

Both artifacts, which join the fertility idol and Sankara stones, can be found at Adventureland Bazaar in Disneyland.

The skull has a light effect to give it an eerie glow.

A sign with a description reads, “The legend says, that a crystal skull was stolen from Akator in the 15th or 16th century and that whoever returns the skull to the city temple will be given control of its powers.”

In “Kingdom of the Crystal Skull,” the character Irina Spalko would beg to differ, as she believes the skull has extraterrestrial origins and possesses psychic powers. Interdimensional beings are one possible explanation, but an archeologist might look elsewhere first. To begin with, why might the skull have such an unusual shape? Anthropological studies of real skulls found on Mayan archeological sites confirm the practice of head shaping. In fact, head shaping of human skulls was a widely spread practice among several cultures going back to the time of Neanderthals in 5000 B.C.

Over in Off the Page in Disney California Adventure, the skull is displayed with the light on.

The last crusade is over, as the Holy Grail has arrived at Disneyland

A sign details the same description as comes on the box.

The description reads, “The Holy Grail, Dr. Jones, the chalice used by Jesus Christ during the last supper, the cup that caught his blood at the crucifixion and was entrusted to Joseph of Arimathea.”

And thus begins Indy’s search for the Holy Grail and his father in the last crusade. Belief in the grail and interest in its potential whereabouts have long fascinated mankind. Legend has it that drinking from the grail grants eternal life, a possibility so tantalizing that the expression “search for the Holy Grail” is often used in our everyday vernacular as a metaphor for an epic quest. The concept of the holy grail is informed by Christian tradition but is not explicitly found in Christian texts. The first mention of the grail is found in a poem written 800 years ago describing a beautiful young girl bearing an elaborately decorated bowl.

The side of the box features the silhouette of Indiana Jones cracking his famous whip.

Opening up the box, the grail is contained in another box designed to resemble a wooden shipping crate.

It’s a humble-looking cup, but appearances can be deceiving.

The tarnished-looking exterior belies a golden-colored cup on the inside.

Would you want to bring home a piece of Indiana Jones’ adventures? Share your thoughts in the comments!