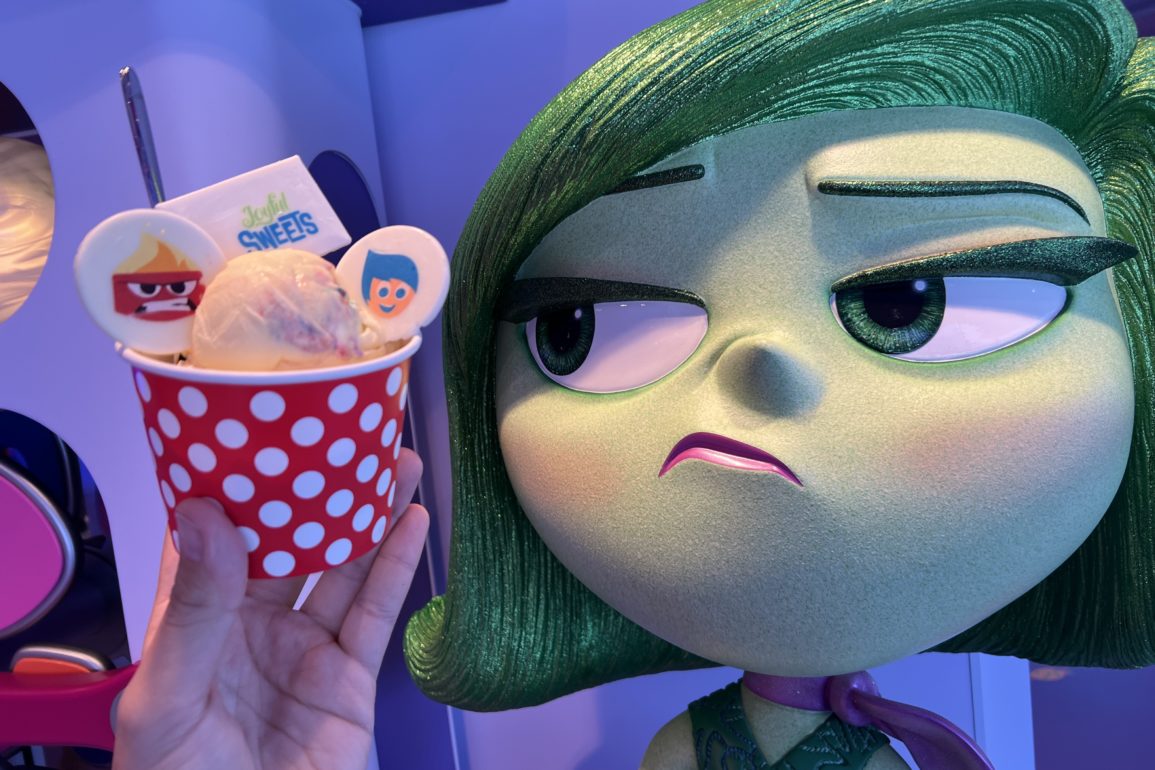 PHOTOS, REVIEW: Tour ‘Inside Out’ Joyful Sweets — From Memory Sphere Vending Machines to Amazing Gelato — Aboard the Disney Wish

Among the special dining and treats locations aboard the Disney Wish is “Inside Out” Joyful Sweets. The shop, which serves speciality ice cream and pastries on deck 11, is designed to look like the Headquarters of Riley’s mind from “Inside Out.”

There are large figures of each of the emotion characters, standing on bases of the pillars. If they look familiar, that’s because they can also be seen at the Inside Out Emotional Whirlwind attraction in Disney California Adventure.

Disgust and Sadness are on each side of the wall of glowing memory spheres.

Anger and Fear are having some big emotions next to the memory sphere dispenser.

And Joy is celebrating in her own corner, next to a wall of posters for different sections of Riley’s mind.

The posters are for Train of Thought, Dream Productions, Abstract Thought, and long-term memory sorting. Again, these are also from the Emotional Whirlwind queue.

‘Inside Out’ Joyful Sweets Treats

Of course, the star of the show are the treats. Some of them are directly inspired by “Inside Out,” as we saw before the ship launched, but there are also macarons, popsicles topped with butterflies, and cupcakes inspired by Captain Minnie and Captain Mickey.

While most food aboard the Disney Wish is included in the price of your voyage, these specialty treats cost extra.

Each of these cupcakes is inspired by a different character. The Joy cupcake is lemon-flavored, the Sadness cupcake is blueberry-flavored, and so on.

These edible memory spheres have an updated look since promotional images were first released. They have a marble finish that gives them a swirled appearance.

Unfortunately, the signature sundae was not available during our voyage.

It’s actually a bowl featuring Bing Bong that is shaped like a Mickey ear hat. It has yet to be available, but a Cast Member was nice enough to show us the display version they had.

Here are the prices for scoops of ice cream and gelato:

There are over forty flavors of ice cream and gelato, some more unique than others.

The latter two had bits of candy in them.

There were then nearly thirty toppings available.

Here’s our finished cup of ice cream, including chocolate medallions of Joy and Anger. The medallions aren’t very good, but we knew it would take a good picture. Again, yes, this is an added charge to the cruise, but it’s also always very good.

We’ve never been disappointed with the gelato from these treat locations and there’s such a wide variety to choose from. The Coconut Bounty was basically like eating a frozen coconut candy, while the cupcake batter had the taste of confetti cake. The Kit Kat gelato was the only one we found disappointing as it just tasted like standard chocolate mixed with pieces of Kit Kat.

We took our dessert to each of the emotions. Disgust wasn’t impressed.

Anger was ready for some ice cream.

And Joy couldn’t have been happier to see her face on the scoops.

Joyful Sweets also has a memory sphere vending machine. Unlike the chocolate spheres noted above, these spheres are plastic with candy inside.

The vending machine wasn’t available during the entire trip, but we did get a chance to try it a few times.

After turning the dial, you get to watch your memory sphere roll down the machine.

You then collect it from the hole at the bottom.

We got a mini jawbreaker candy-in-a-maze puzzle game.

What treat would you order at “Inside Out” Joyful Sweets on the Disney Wish? Let us know in the comments.