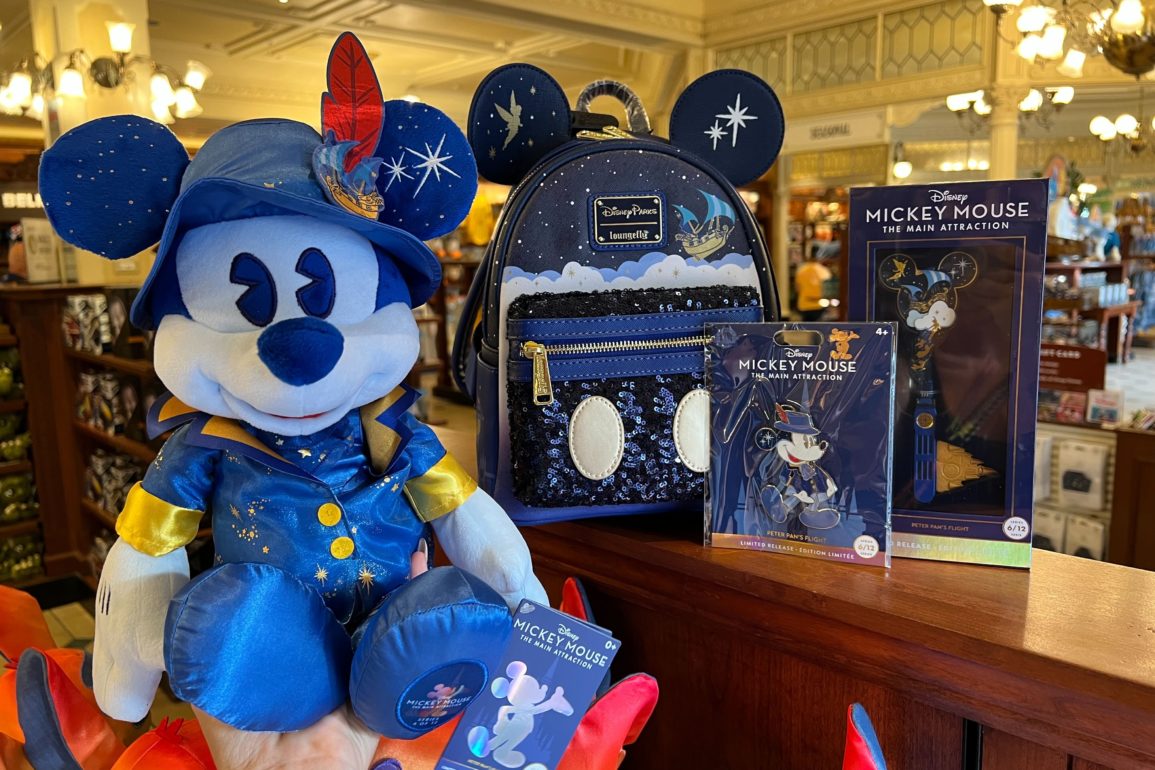 Another collection from Mickey Mouse: The Main Attraction has made its debut in the Disney parks. This set is series six of twelve, marking the halfway point of this line. While this collection first dropped on shopDisney last month, today’s finds come from Walt Disney World.

This collectable key figure shows the 50th Anniversary symbol on a gold Cinderella Castle off the side. The key is blue with Big Ben clock tower and a Mickey shaped outline on the top.

The top of the key shows gold outlines of Pan, John, Michael, and Wendy joining Tinker Bell and the Jolly Roger.

The side of the bag overlooks the cityscape of London on the children’s journey to Neverland.

The mini backpack has matching blue straps. The opposite side continues the cityscape and shows Big Ben.

At the top of the back of the bag reads “Peter Pan’s Flight” in the attraction’s logo.

The limited release pin was among the items spotted in this collection! Mickey is dressed in all blue and sparkles on his ears with a red feather sticking out from his hat.

He even has a ruffled pirate collar similar to Captain Hook.

The last item from the collection we spotted is the Peter Pan’s Flight Mickey plush. Like the other items, he is blue with gold and white detail. His foot also shows Mickey Mouse: The Main Attraction symbol, like the tag.

He wears a blue bucket hat with a large red feather and and image of the Jolly Rodger.

On the back of his ear is the Walt Disney World 50th Anniversary logo.

All of these items were found at Emporium at Magic Kingdom’s Main Street USA.

What do you think of Peter Pan’s Flight collection from Mickey Mouse: The Main Attraction? Let us know in the comments!

We also spotted series 5 of twelve in Walt Disney World.

Check out the next upcoming Mickey Mouse: The Main Attraction Collection here.