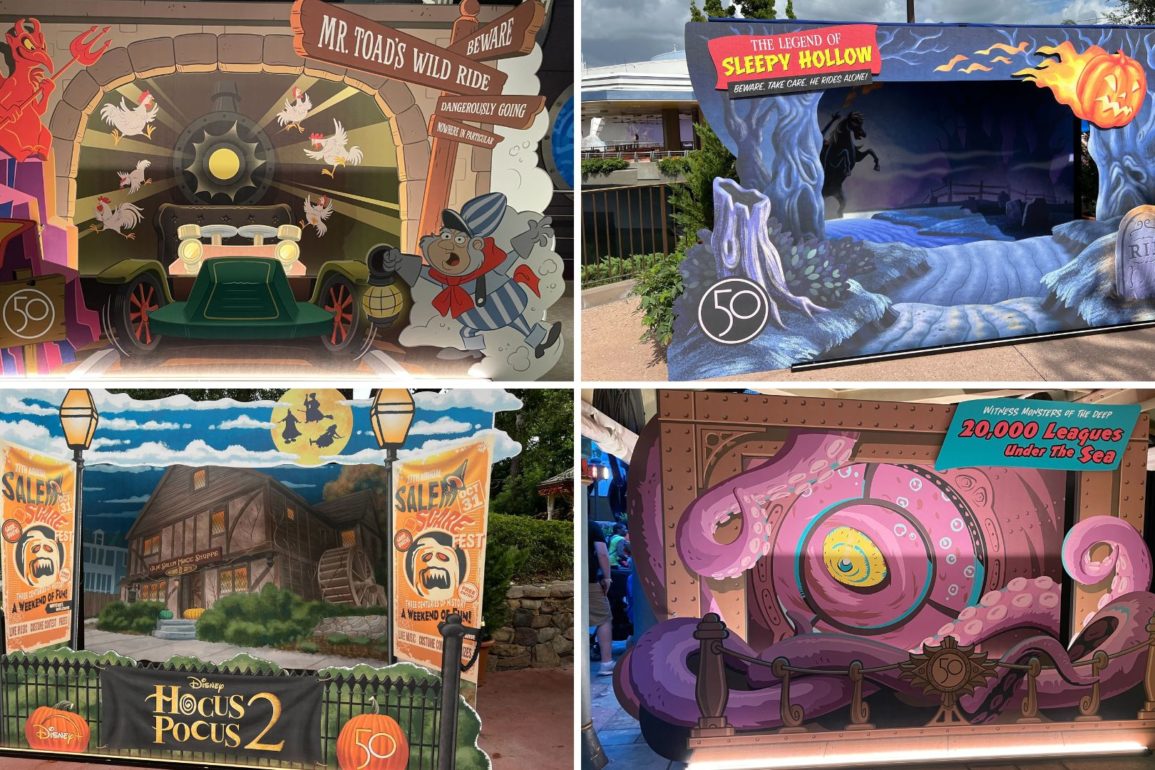 This “Hocus Pocus 2” photo op is behind Ye Olde Christmas Shoppe in Magic Kingdom. All of these step-in photo ops have flat foregrounds and backgrounds. You can stand between the two to look like you’ve walked into the movie.

This photo op has the Disney+ and 50th anniversary logos on pumpkins in the foreground.

The foreground also has a “Hocus Pocus 2” banner.

Banners on either side of the photo op advertise the 27th Annual Salem Scare Fest, which we will likely see in “Hocus Pocus 2.”

The silhouettes of the Sanderson Sisters fly above the moon in a cloudy sky above the photo op.

“The Legend of Sleepy Hollow”

This “Sleepy Hollow” photo op is in the Magic Kingdom Hub, between Main Street, U.S.A. and the Tomorrowland bridge.

It also features the 50th anniversary logo in the corner.

A title card for “The Legend of Sleepy Hollow” is at the top corner, above some spooky trees.

A flaming jack-o’-lantern flies across the other top corner.

There are gravestones in the foreground, including one for Washington Irving, the author of the original “The Legend of Sleepy Hollow” short story.

The Headless Horseman is in the background, shooting fire from one hand and wielding a sword in the other.

The Mr. Toad’s Wild Ride and “Monsters, Inc.” photo ops are inside the queue for what was once Stitch’s Great Escape. At previous parties, Stitch would meet in this area. Instead, he can be found outside in Tomorrowland.

Signage for the Galactic Federation from Stitch’s Great Escape remains on the wall.

This photo op puts you right into the action of Mr. Toad’s Wild Ride. Guests can pose behind a flat image of Mr. Toad’s car, with a train approaching in the background.

Chickens are flying around the background in distress.

The 50th anniversary logo is on a sign in the corner of the foreground.

A devil awaits you in the upper left corner.

A train worker is in the lower right corner, trying to warn wayward drivers of the approaching danger.

The “Monsters, Inc.” photo op lets you step into one of two doors looking into a child’s bedroom.

Mike and Sulley are hanging onto the doors, which look like they’re swinging through the door room of Monsters, Inc.

The “Monsters, Inc.” logo is at the top of the photo op.

The 50th anniversary logo is in the upper right corner.

This 20,000 Leagues Under the Sea photo op is in the covered seating area of Adventureland, near the spitting camel.

It resembles the metal of a submarine.

A “20,000 Leagues Under the Sea” sign also reading “witness monsters of the deep” is in the upper right.

A pink sea monster peers through the background of the photo op, wrapping its tentacles around it.

The 50th anniversary logo is on a plaque in the foreground. This same plaque design (without the “50” of course) was on patches and hat badges on Cast Member costumes for 20,000 Leagues Under the Sea: Submarine Voyage.

Which photo op are you hoping to snap a picture in? Let us know in the comments!