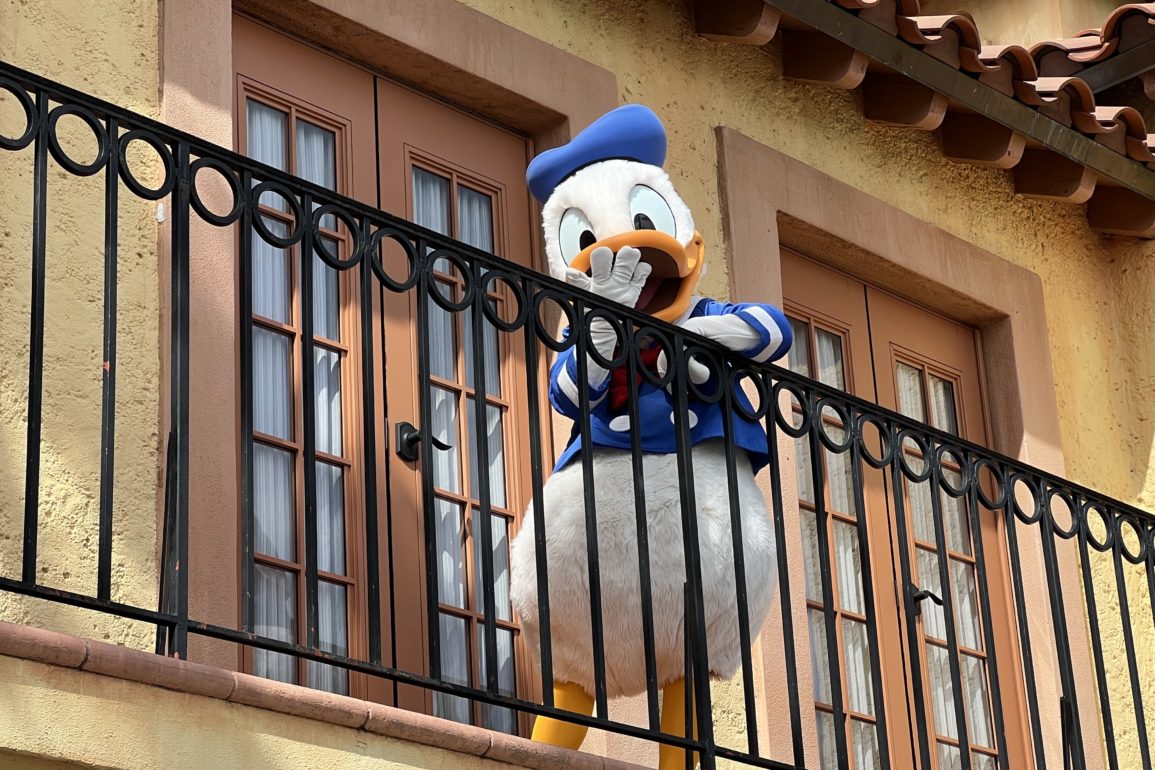 Bright Suns from Disney’s Hollywood Studios! Today, we’re making our way around the park to look at some new merchandise, so let’s get started!

Before heading to the park, we drove by the Goofy DVC Billboard to check on its progress and noticed that it’s stripped and ready for fresh paint.

Is that some spooky Halloween decor in the windows at Mickey’s of Hollywood?

Look at the cute window decor! Pluto is back there in a pumpkin with some other creepy Halloween designs.

Inside the shop has an entire corner dedicated to the new seasonal merchandise.

The new Grogu pumpkin candy bowls are available towards the back of the shop. We love how he’s peeking just over the top of the bowl, we definitely need one.

Across the street at Celebrity 5 & 10, we spotted the Hitchhiking Ghosts on a new pet bed. The bed features the infamous Purple Wallpaper and a removable cushion.

At Darkroom, The Muppets are taking over this groovy retro-looking magnet.

Snow White is swept away by her Prince Charming on the commemorative 85th anniversary Sketchbook ornament. We can’t believe its been that long already!

A hint of sparkle caught our eye, the golden 50th Anniversary license plate frame is in stock at Celebrity 5 & 10, we originally found it at BVG at Disney’s Contemporary Resort.

Off the Wall! Disney has collaborated with Vans for this retro-inspired 50th Anniversary collection in The Vault section of the store.

Keystone Clothiers has a new Star Wars x Native collection with a familiar Baby Grogu on the back of the heel. These would be perfect rain shoes for the park!

A Star Wars “Your focus determines your reality” pad is on the table across from the new kicks. It features a felt-like top and a cork pad on the bottom.

You can now get your very own Obi-Wan Kenobi L0-LA59 also in Keystone Clothiers.

Continuing our shopping spree down Sunset Boulevard, we spotted the new Donald Duck Dooney & Bourke Collection in the far back of The Majestic. As you can see, there are quite a few other Dooney collections back here including the more recent Emperor’s New Groove.

Sunset Club Couture has us hungry for some pizza with the cutest reversible Pizza Planet hat. It features the little green aliens with slices of pepperoni on one side and the Pizza Planet logo on the other.

Stand-by was only 13 minutes for the Twilight Zone Tower of Terror today so we had to “drop in!” Did you know when they put the time at 13 minutes that means there is usually little to no wait?

After our quick stay, we perused Tower Hotel Gifts where the new Hollywood Tower Hotel tumblers have been restocked.

Trick-or-treat! Grogu and the “spooky” droids are ready for Halloween on these festive shirts. We found them at Tatooine Traders.

Just next to the Halloween shirts, there is a new Star Wars line and its one of the first winter collections we’ve seen!

Get ready for fall with “May the force be with you” apparel featuring a long-sleeved embroidered shirt, striped sweater vest, a jersey cardigan (do you recognize those faces?), and a pink shirt and pants set.

Over at Dok Ondar’s, new Star Wars medals are available including one from the Rebellion from “A New Hope”. They have either matte or glossy cases and feature a large gold medal with insignia and a ribbon.

We made sure to wave to Vi Moradi as we were heading out of Star War’s: Galaxy’s Edge. Hi, Vi!

We made one more pass through the shops in the front, and lucky we did! A new Hollywood Tower Hotel bellhop keychain is at Celebrity 5&10.

We had to wave to Donald before leaving for the day! Thanks for following along!