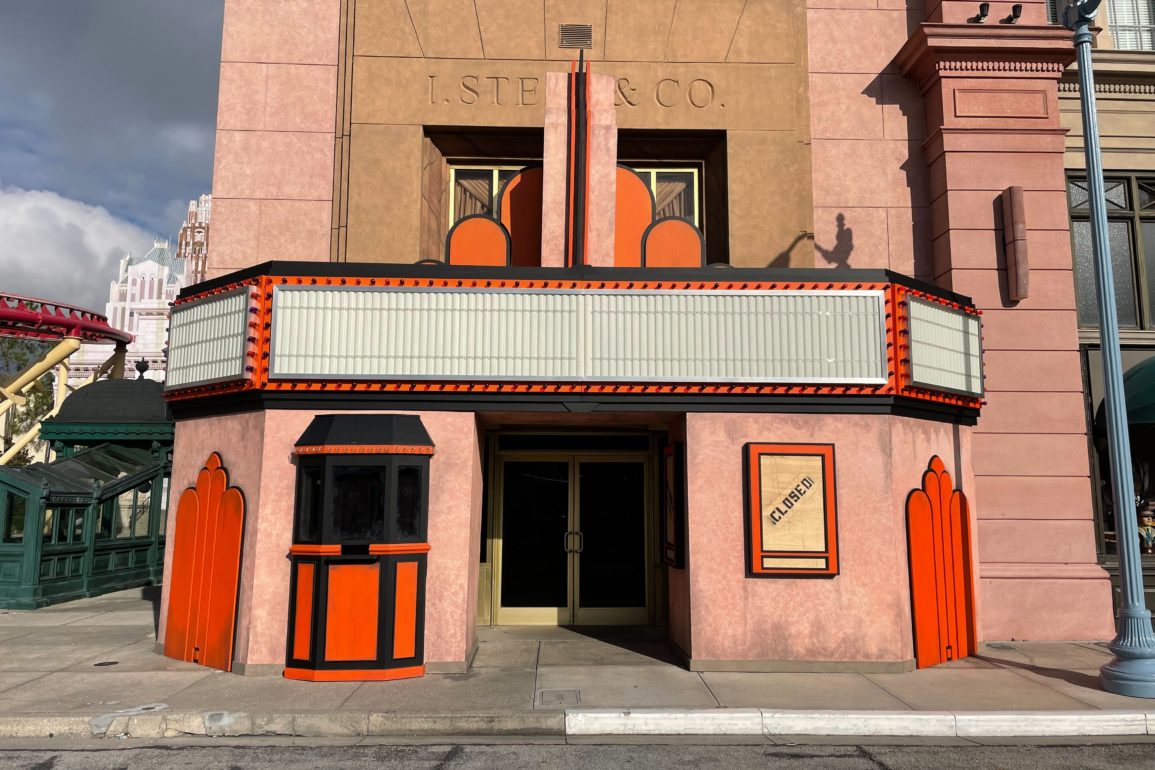 The entrance to the Tribute Theater is certainly looking different these days as the Halloween Horror Nights 31 Tribute Store begins to take shape at Universal Studios Florida.

The exterior uses the same movie theater façade as the Summer Tribute Store, but now sports a weathered black and orange color scheme to reflect the Halloween theme.

The art deco-like designs remain on the sides, but are now bright orange.

On the left hand side, the poster (which was for “E.T. the Extra-Terrestrial”) has been replaced with an old-fashioned ticket booth.

Meanwhile, the posters have been removed and replaced with wooden boards that remind guests that the Tribute Theater is closed… for now.

The next day, the boards offered more clippings, much like the ones that appeared in the Summer Tribute Store over the course of the season.

The clippings come from multiple years, each telling a different chapter from the Tribute Theater’s dark past. In 1939, the owners mysteriously disappeared, leaving an office “inexplicably filled with candy.”

Above, we can see that the theater’s candy may have poisoned come patrons back in 1942. Could Major Sweets be involved?

The poisonings damaged the theater’s reputation, causing it to close the following year.

Some clippings were previously seen in the store, the this one of the theater’s opening in 1885.

There’s also a sticker and advertisement for the “Dead Coconut Club” featuring the Universal Monsters. This is a reference to the Red Coconut Club at CityWalk. The tropical theming of the All Hallows Hula Boutique that was seen at Universal’s Islands of Adventure this summer used a similar motif.

(We’re hoping this means the Red Coconut Club is getting a Halloween overlay).

There’s also a program from The Tribute Players’ production of “Dracula” during the 1927-28 season.

A few short years later, it became a cinema.

Nine years after it shut down, the theater was acquired by the town, and the following year, received funding from a local candy maker. I’m sure that everything will go just fine.

As part of the full lineup reveal today, Universal also noted that the Tribute Store will tie into the nearby scare zone. The store will have four rooms, themed to a Pumpkin Patch, Cemetery, and Witch’s Cottage, with the final room as a Halloween festival. This is the same festival taking place in Sweet Revenge, the scare zone that the store exits into.

Next
Kal David, Voice of Sonny Eclipse, Passes Away at 79