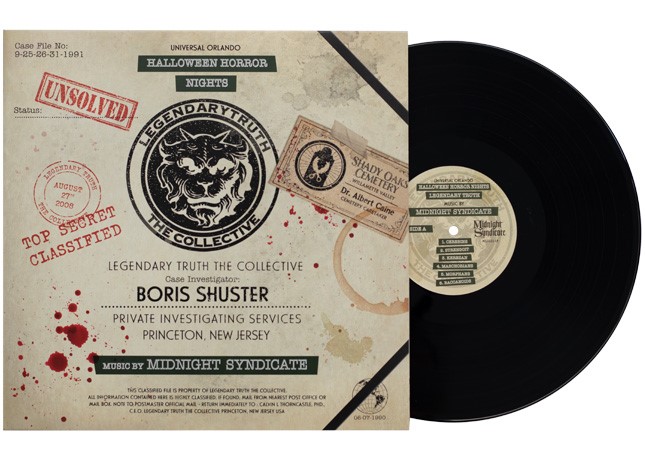 Midnight Syndicate is back again with a new limited edition album inspired by Legendary Truth for Halloween Horror Nights 31!

The album is currently listed on Universal Orlando Resort’s online shop as sold out. Most likely, it will be released at Universal Studios Florida first, as the annual event begins there this Friday. Last year, Midnight Syndicate’s album for Halloween Horror Nights sold out extremely quickly.

For those not in the know, Legendary Truth: The Collective was introduced as an in-park experience in 2008, centered around an organization that investigates paranormal phenomena. The cover itself is packed with references to events past, including founder Boris Shuster, the founder of Legendary Truth, and the key figure in last year’s house, Case Files Unearthed: Legendary Truth. There’s also a card for Dr. Albert Caine, better known as The Caretaker, while the text on the bottom names Dr. Calvin Thorncastle, Ph.D., the CEO of Legendary Truth.

The track list features the names of the Legions of Horror, first introduced in 2012.

SIDE B
Case files

Are you looking to bring the sounds of Midnight Syndicate to haunt your home? Share your thoughts in the comments!