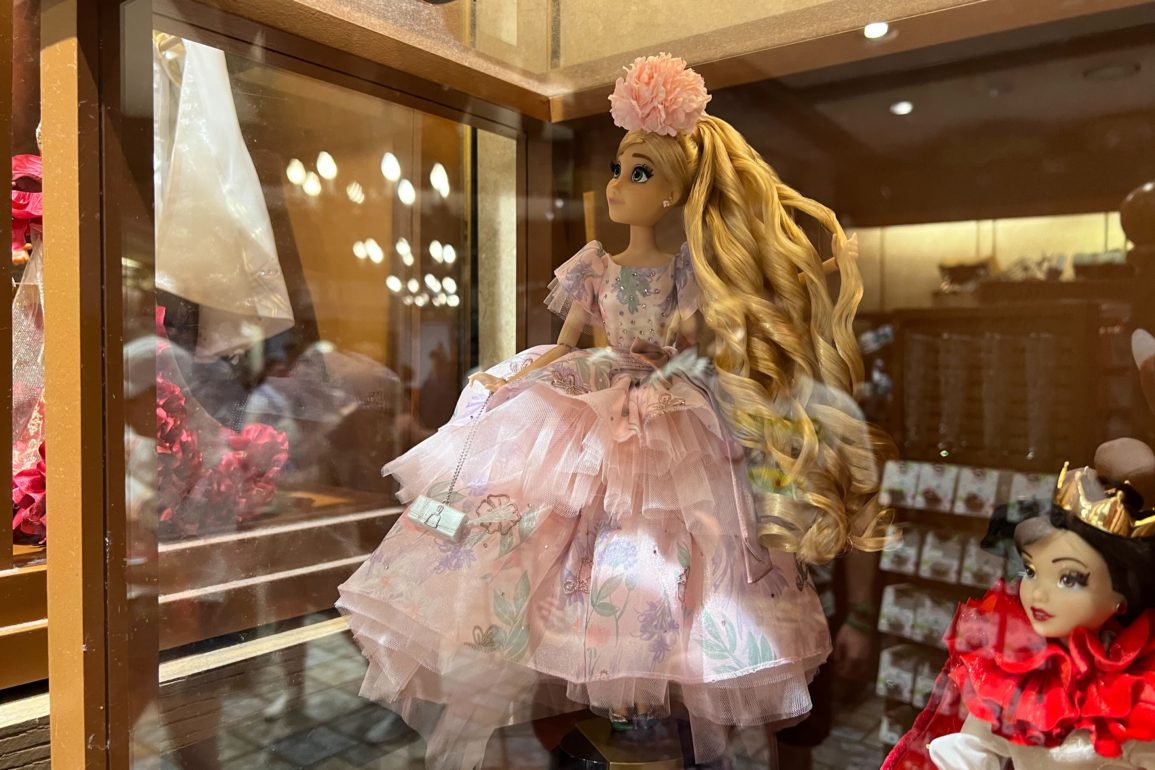 Two new designer collection dolls have arrived at Walt Disney World. Check out the unique looks for these limited edition Belle and Rapunzel dolls below.

The box features the “Disney Designer Collection” logo on the front. It also details iconic images from Beauty and the Beast, such as the rose and books. Each book also has a rose on the cover.

There is a little card on the inside of the box with the information of the designer, Heidi Ticehurst. At the bottom of the card, the scene in the ballroom where the Beast transforms to human form is shown.

At the very top of the box, the Disney Princess Collection logo is seen from the inside. The logo is also seen at the bottom center of the box.

Belle’s hair is in an updo with a deep red headband. The headband also has a rose with a gold accent on top.

The top of Belle’s dress is two different red tones with gold rose accents as well. The center of the dress, near the waistline, looks like rose petals. Belle is wearing red gloves. Her purse is also in the shape of a book, with the iconic rose in the center of it.

The bottom of the dress has a sheer gold layer atop more of the red. The very bottom has ruffles stylized like rose petals.

The Rapunzel box features the “Disney Designer Collection” logo. On the box is the iconic Sundrop Flower, as well as the sun emblem that can be found in the kingdom and on the lanterns.

The inside of the box features another designer card, as well as the sun emblem in a geometric pattern.

The card featuring the name of the designer, Tetsunosuke Saiki, can be found inside the box on the left hand side. Below Saiki’s name, the iconic tower that Rapunzel is forced to live in by Mother Gothel is illustrated.

The inside of the box features the iconic lanterns that are a prominent theme within the movie “Tangled.”

Atop Rapunzel’s head is a large pink flower headpiece. The top of her dress is pink with green vines and purple flowers. There are also purple rhinestones peppered across the top.

There is a pink ribbon tied at her waist. In her hand, Rapunzel holds a silver purse. The bottom of the dress has the same pink background with green vines and purple flowers. However, there are gold flower accents on the bottom of the dress, as well as ruffled tiers to the skirt. Her shoes are green with gold accents.

Rapunzel has posable arms, allowing her to comb her fingers through her iconic hair.

The tresses of Rapunzel’s hair fall down past her waist.