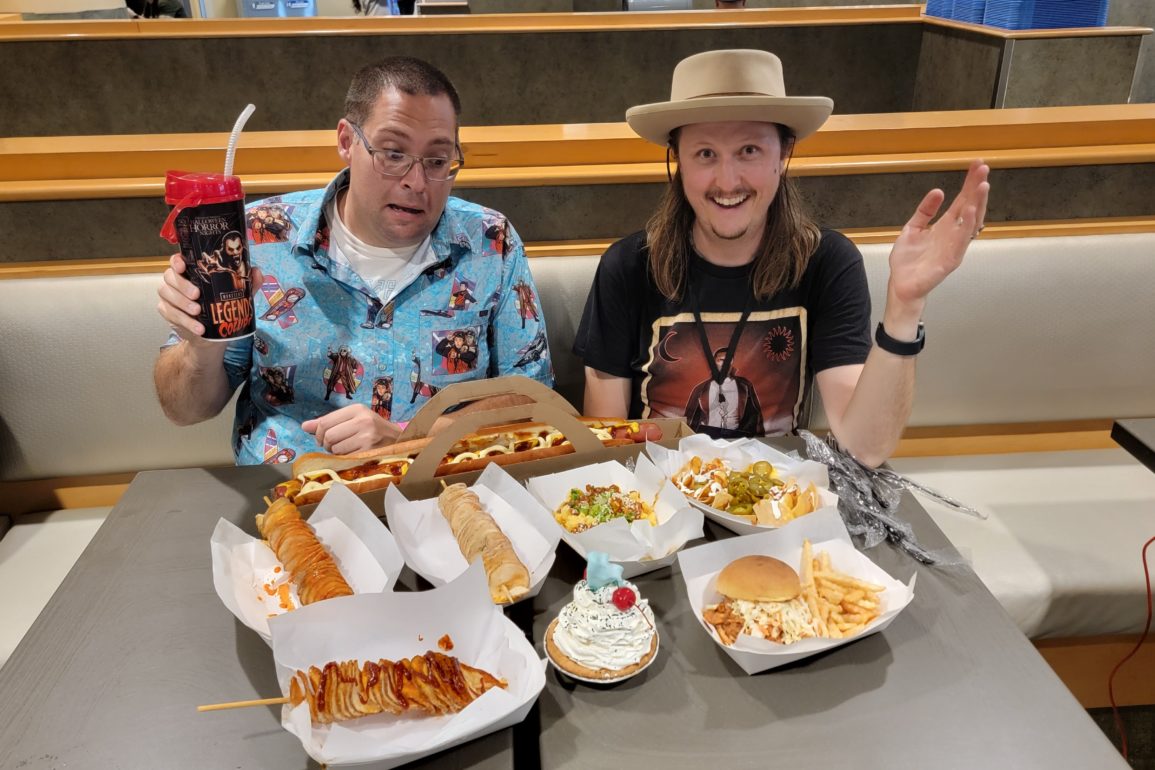 Watch our video review of the food below, or keep scrolling for more photos and the full review.

This is a lot of hot dog. And even with the size of this thing, they definitely pack a lot of that “hot dog flavor” into the dog itself.

The frankfurter itself is more than a half-inch thick and runs the length of 22 inches. Topped with only chipotle ketchup and mayo and mustard, the kick of spice from the ketchup is nice, helping to bring some variety to the very present hot dog flavor.

Overall, this dish is very strong – like licking the hot dog roller from a 7-Eleven that hasn’t had maintenance since Obama was in office.

If you are in the mood for a hot dog, this will hit the spot but the intensity of the dog flavor means a little bit goes a long way. It’s odd that the one entree which wasn’t bland and tasteless at this booth just happened to be a very strong flavor.

This was the only actual barbecue item on the menu and because of that, it was the most disappointing when it was underwhelming. The entire thing tasted bland, like even the flavor of the chicken had been zapped away by alien Klowns. The BBQ sauce was nearly flavorless, leading to a wet, rubbery paste that was menued as pulled chicken. The slaw on top was similarly bland, with only a slight vinegar note to distract from the very wet chicken. Overall, we were disappointed by most items at this booth but nothing more than this sandwich.

This was similarly bland Mac and Cheese, topped with a lackluster chili. The chili itself wasn’t bland, it was just mediocre. The mac and cheese wasn’t good. It was so flavorless as to be enjoyed as much as plain elbow macaroni would be.

The combined experience of the chili and the mac only served to bring the mediocre chili down a level to overall meh. This dish, and many of the others at this booth, seems to be a “lowest common denominator” selection of flavors that don’t really take a stand in any direction – no particular flavor, no spice, nothing to remember fondly. They all count as food but are so bland as to be completely boring.

These are classic movie theater nachos, with cheese sauce, sour cream, chili (the same as the loaded mac and cheese above), and a hearty amount of pickled jalapenos.

These were rather run-of-the-mill and nothing of note. But after a long night of running from Killer Klowns and monsters, they are good enough to satisfy a group of survivors that made it out.

These were all pretty good. They are sliced very thin so as to become more like potato chips than french fries, which was our only mark against it. But that is a minor note and they were all three very enjoyable. With this being the first time Universal Studios Hollywood has had the Twisted Taters, a favorite from Universal Orlando Resort, we can understand why they are a fast favorite.

This one was good, with a very complex seasoning and a nice, vinegary buffalo sauce. It brought some heat but was not overwhelming and was balanced out by the blue cheese flavor.

This one was the best of the three, though it was a close race with the BBQ tater.

Another delicious offering. The barbecue rub has a bit of heat, and is well balanced but not overly salted, as many barbecue seasonings are. The barbecue sauce on this tater is far superior to the barbecue sauce that was included in the wet chicken sandwich. It’s tough to say whether this or the buffalo blue cheese was the winner, but you can’t go wrong with either one.

This one was still good, though the least favorite of the three flavors. It’s definitely cheesy and the truffle comes through well, which is always nice.

But it didn’t wow us as much as the others and therefore is moved to the bottom of the list not for anything wrong with it but only by default.

This was far and away the highlight of this booth. A bottom crust for the pie is topped with stewed cinnamon apples and a gigantic scoop of vanilla ice cream, then surrounded by a light, fluffy whipped cream with cherries on top and a piece of watermelon cotton candy. The ice cream held up well and didn’t leak or shift through the entire time we were eating all the other foods. This whole thing is light and sweet and well-balanced and the exact kind of treat that we were hoping for. The watermelon cotton candy suits the theme well and is a great flavor, though it gets wet and hard to eat towards the end. Overall this was our favorite treat from this booth and we will likely be returning for this again.

This is an exclusive flavor of soda that can only be acquired through the Coca-Cola freestyle machines with your refillable cup available for the event. The soda is a deep purple and is a very strong, sweet flavor that tastes almost like a melted gummy worm.

Tom Corless described it as “Willy Wonka’s Sweat,” which is also a likely apt description. With being so warm and walking through these sweaty, latex covered houses we were more in the mood for something that would hydrate and satisfy but for what it is — an event for Halloween — this is like drinking your Halloween candy in a cup, which is appropriate. We wouldn’t necessarily recommend buying the refillable cup just to try this soda, but if you already have one it’s definitely worth a sip just to say you experienced this exclusive flavor.