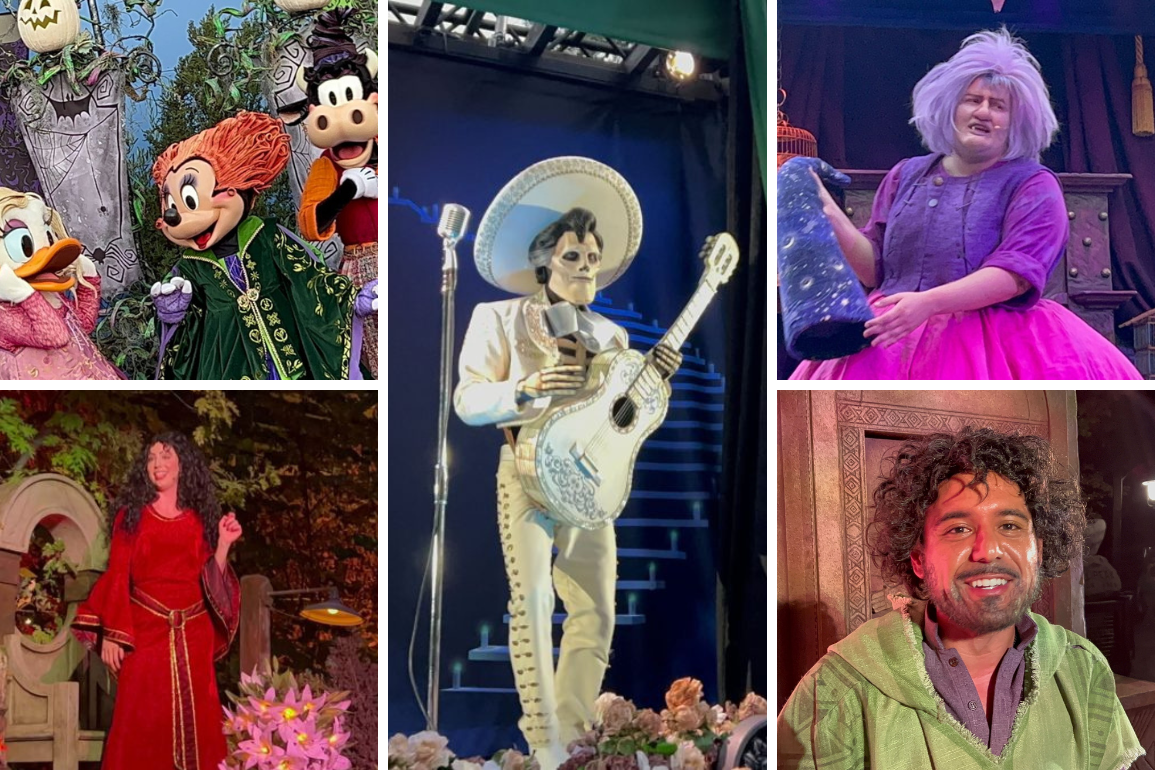 Earlier, we got a sneak peek of new characters appearing at this year’s Oogie Boogie Bash in Disney California Adventure, thanks to Cast Member previews. Now we got to see Minnie and friends, Bruno, Ernesto de la Cruz, Madam Mim, and Mother Gothel in person!

Minnie, Daisy, and Clarabelle as the Sanderson Sisters

Minnie is dressed as Winifred Sanderson, Daisy as Sarah Sanderson, and Clarabelle as Mary Sanderson.

They’re appearing on a purple carpet in front of purple and green backdrops with white jack-o’-lanterns and vines.

They can be found in Hollywood Land in the back corner at Stage 12.

There was a long line to see Ernesto de la Cruz at the Bountiful Valley Winery behind Carthay Circle.

Seize your moment and catch the performance of a lifetime (or… death time) from Ernesto de la Cruz, singing on stage with his (or… Héctor’s) white guitar.

Ernesto is in his skeletal form from the afterlife, and the backdrop behind him resembles the stage he performs on during the climax of “Coco.”

His stage is framed by two white statues of himself, and the edge of the stage is lined with flowers.

Ernesto even has some mood lighting for his performance of a spooky version of “Remember Me.”

Madam Mim from “The Sword in the Stone”

Madam Mim appears on a stage with her own Medieval throne in Hollywood Land, behind the Hyperion Theater.

Merlin’s owl Archimedes is locked up in a cage next to her throne, and she’s even gotten a hold of Merlin’s hat.

Shields along the edge of the stage show her other animal forms.

Gothel has her own thrown in Grizzly Peak, behind the entrance to Grizzly River Run.

Melting candles run along the walls and stairs.

Glowing bouquets of flowers are in pots along the edge of her stage.

The background resembles his room in the Casita with a large glowing hourglass, statues of Bruno seeing the future, and — of course — plenty of sand.

He told us his 32 rats have been sampling some of the candy.

Bruno is one of the only non-villains you’ll find at Disney California Adventure during Oogie Boogie Bash.

See all of the new meet and greet characters at Oogie Boogie Bash 2022 in our video below.

Next
BREAKING: Fire Breaks Out in World Showcase at EPCOT