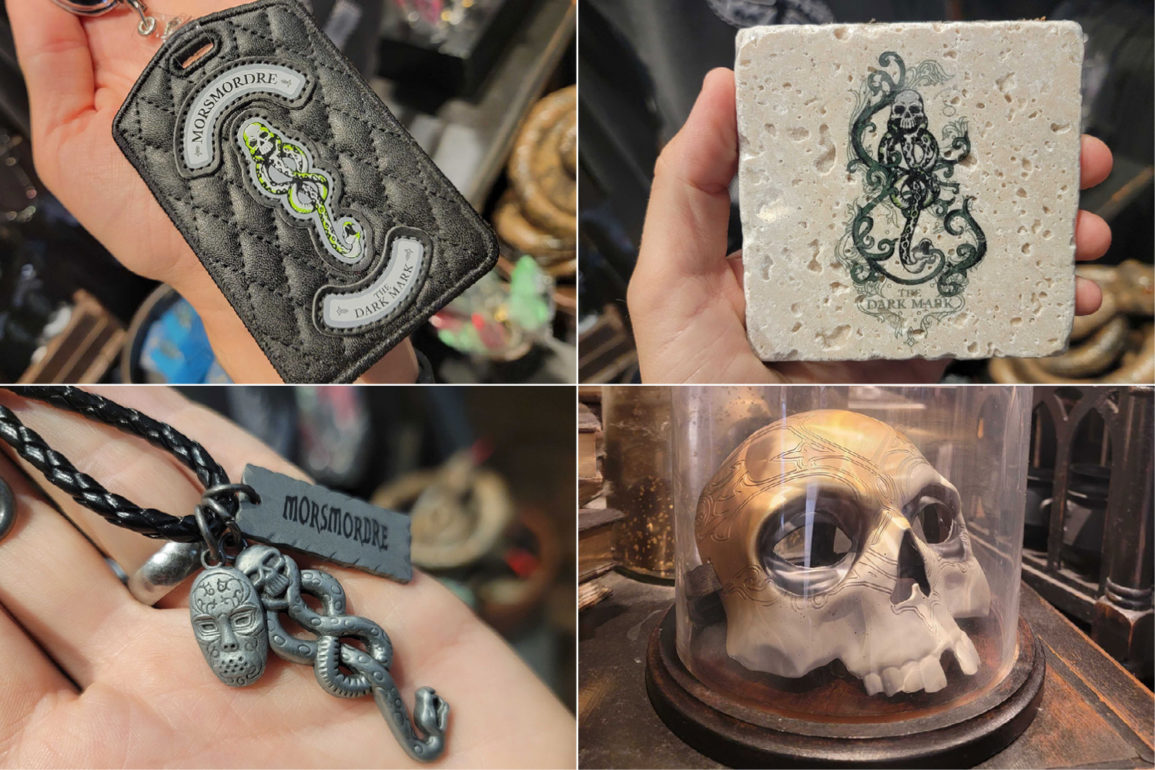 With Halloween around the corner and Halloween Horror Nights in full swing, people are getting ready to celebrate the spooky season. And in the spirit of the season, we found a new Harry Potter merchandise collection at Universal Studios Hollywood, this one surrounding the Death Eaters and the Dark Mark.

While not a full face mask like the Death Eaters wear in the Harry Potter films, this one is a pretty close rendition. This version of a Death Eater mask is sure to be a great pick for any Slytherin fans trying to get their costumes together.

This Death Eater mask has intricate details around the facial structure. These detailed lines are at the top of the forehead, as well as around the eye sockets and the nose.

Just like He-Who-Must-Not-Be-Named, this mask has no nose! It is also missing a front tooth.

The back of the mask features straps to make sure the mask stays on the wearers’ head.

This keychain has the Dark Mark on full display. It shows the infamous Dark Mark, a snake coming out of the mouth of a skull.

Above the “Dark Mark” itself are two other charms.

The cylindrical charm reads “The Dark Mark” on a black background. The circular charm reads “Morsmordre”, which is the spell the Death Eaters cast in order to conjure up the Dark Mark. It is on a green background and also has an arrow on it.

The back of the keychain is plain metal, no details to be seen here.

This faux leather tassel might seem plain, but don’t let your eyes deceive you! There’s a Dark Mark charm to the left of the tassel.

As well as the Dark Mark charm, there is a smaller one to the right of the tassel. It is a small circular charm that reads “The Wizarding World of Harry Potter Universal Studios”.

The back of the charms are both plain metal, no extra decoration to them.

The back of the keychain is plain black with a diagonal pattern in the leather. There is also a metal piece at the top that reads “Morsmordre”, featuring the same arrow pattern again.

The front of the keychain also reads “Morsmordre” above the Dark Mark. The Dark Mark itself is white with green accents surrounding it. Below the mark itself reads “The Dark Mark”.

This enamel pin, similar in design to the Dark Mark metal keychain above, features the Dark Mark with green tendrils coming out of the snake’s mouth.

At the top of the keychain, there is also a small circular metal piece that reads “The Wizarding World of Harry Potter Universal Studios”.

This crossbody bag is made of faux leather and features various Dark Mark symbols. The back bag has the Dark Mark as the clasp that opens up the bag. At the bottom of the bag, it reads “Morsmordre”.

The sides of the bag are plain. This side features the two rings where the crossbody strap clips to the bag.

The back of the bag is lacking in detail, just plain black.

The bottom of the bag is also plain faux leather with no details.

The Dark Mark wallet is also black faux leather, like the crossbody bag above. The wallet comes with a chain.

The wallet features an embossed Dark Mark as well as “Morsmordre” embossed in the bottom right corner.

Both sides of the wallet feature the spell name and the Dark Mark embossing.

The inside of the wallet is very spacious, with three card slots on the left and right sides, and a clear space to put your ID in the middle.

This retractable ID Hanger is similar in nature to the items prior on this list.

The Dark Mark is front and center on the black faux leather. It features green accents around the sides of the mark. “Morsmordre” is seen on top while “The Dark Mark” can be read at the bottom.

The retractable piece of the ID hanger features the same arrow pattern that can be seen on the metal keychain. This arrow indicates the direction in which the snake curves out of the skull.

The back of the hanger features a clear spot to place your ID, for easy viewing access.

This simple, black mug is the only item that is not overtly Death Eater/Dark Mark merchandise.

The cauldron mug is also plain black on the inside.

The sides feature extra little details where the handles are attached.

The bottom of the mug still reads “The Wizarding World of Harry Potter”, so you don’t forget where it came from.

The mug has two handles, which is a nice little touch.

The front of the mug features the Dark Mark in white, with green tendrils coming out of the snake’s mouth. The black background of the mug helps the mark stand out.

The inside of the mug has a snakeskin pattern around the rim.

The back of the mug features the arrow in the snake’s pattern again. Around the base of the mug reads “Morsmordre”.

This white, porous coaster features the Dark Mark in black and green. The white background he’s the mark stand out.

Which item do you need to add to your Harry Potter collection? Let us know in the comments below!