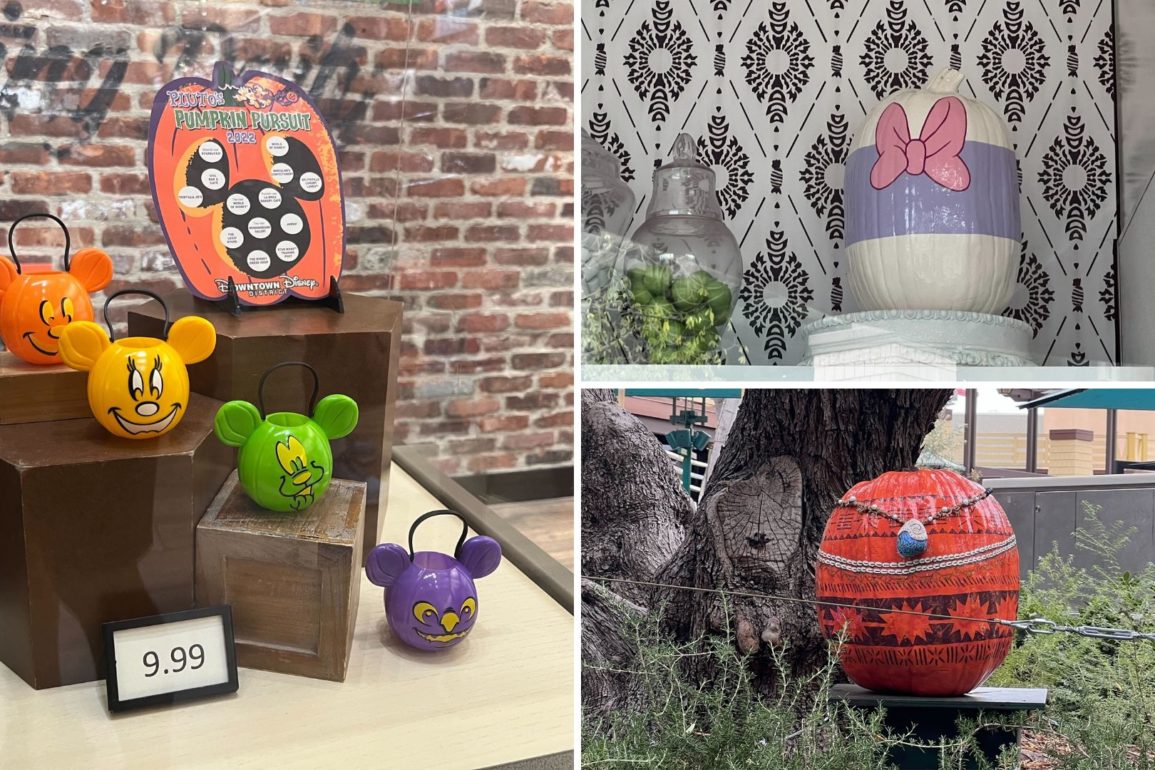 The Pluto’s Pumpkin Pursuit has returned to Downtown Disney District for another year of pumpkin hunting. The scavenger hunt map is $9.99 and can be found at Pin Traders or World of Disney.

There are signs up throughout Downtown Disney District advertising the scavenger hunt.

After completing the hunt, guests can also return their map to Pin Traders or World of Disney for a prize.

This year’s prize is the choice of one of four Mickey-shaped jack-o’-lantern treat pails.

The World of Disney redemption location is inside the store.

The “map” is pumpkin-shaped, with different locations in circles across a Mickey head.

The “Tree near Wonderground Gallery” location is a little misleading — more about that with the list of pumpkins below.

The back of the map has a sticker sheet of all the pumpkins. As you find each pumpkin, place the correct sticker on the location on the other side of the map.

Now here is where you can find each pumpkin. Spoilers if you want to play the game!

The Lilo and Stitch pumpkins are in this vine-covered tower outside UVA Bar.

The Lilo pumpkin is painted like her red dress, while the Stitch pumpkin features his face.

A BB-8 pumpkin is in the tree outside Star Wars Trading Post.

None of the pumpkins are hidden inside this year.

Baymax is on a column outside the LEGO Store.

The Pluto pumpkin is in the Tortilla Jo’s belltower.

This pumpkin even includes Pluto’s nose and ears.

This pumpkin is at the end of the Splitsville entrance awning.

It’s a Donald-inspired pumpkin, painted like his classic sailor outfit.

The “Tree near Wonderground Gallery” is really the tree right outside Ralph Brennan’s.

Okay, there is one pumpkin inside, but it’s visible through the Marceline’s window.

This is the Daisy pumpkin.

This pumpkin is on the wooden awning above the Dress Shop entrance.

The Pinocchio pumpkin is above the Jamba marquee.

The Moana pumpkin is taking a Journey of Water atop the the waterfall near Starbucks.

This pumpkin resembles her orange top, with the Te Fiti necklace hanging over the top of it.

The polka-dotted Minnie pumpkin is in a tree outside La Brea Bakery Cafe.

Tree by World of Disney

The tree across from the center of World of Disney is holding a Goofy-inspired pumpkin.

The Mickey pumpkin is at World of Disney itself, on the marquee next to the store name.

We chose the Mickey-inspired treat pail.

These are very small pails, but would be perfect for a small child or as Halloween decor.

“Pluto’s Pumpkin Pursuit” is printed on the back.