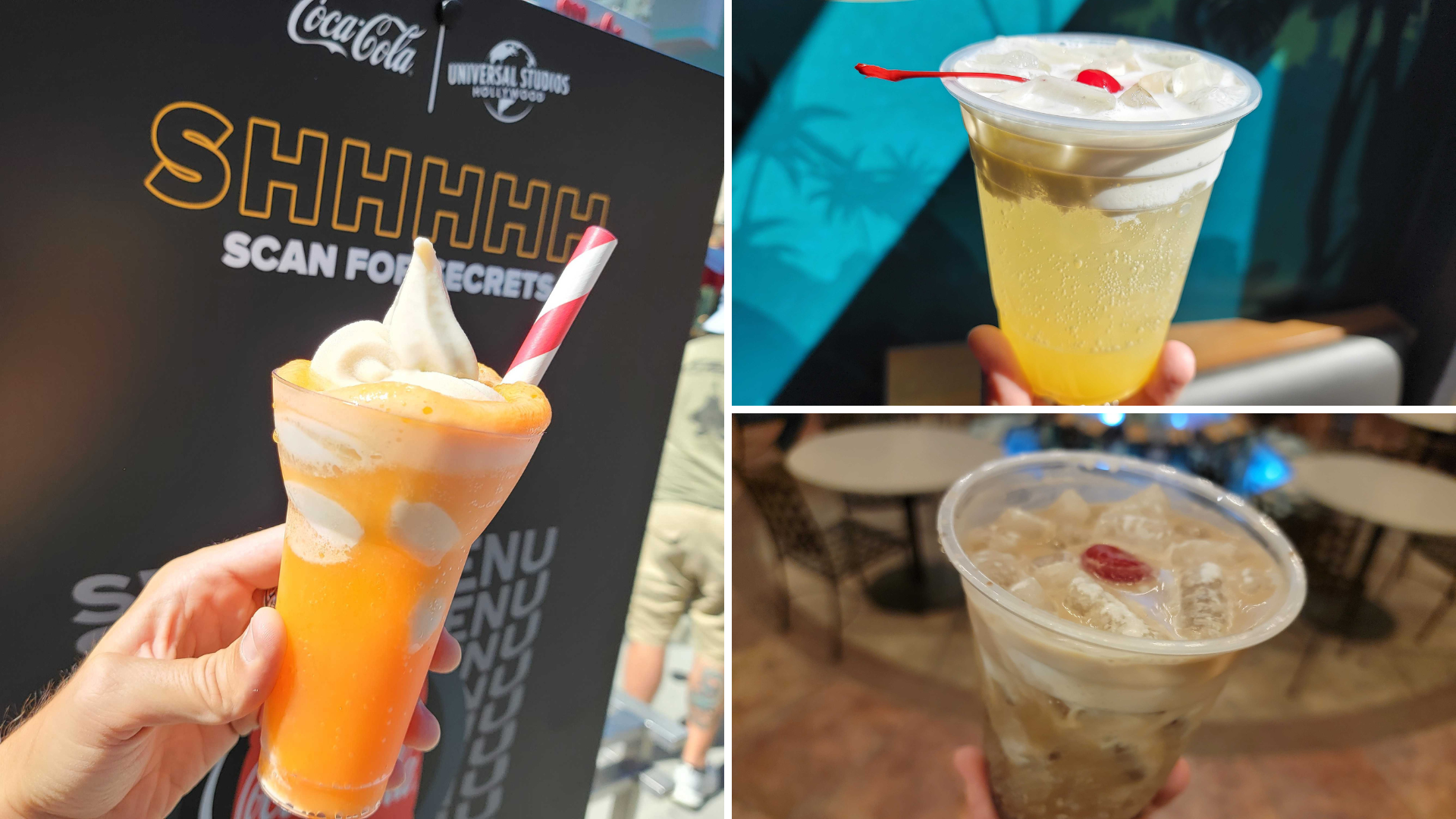 Recently, we tried three drinks from the Universal Secret Menu at Universal Studios Hollywood. Check out our review to see how they taste!

This drink is described as a “velvety sweet blend of Coca-Cola® Zero Sugar and coconut cream with a cherry on top”.

This was surprisingly good. Not “over the moon” incredible, but definitely something special and very enjoyable. Coke Zero is combined with coconut syrup and real cream before being topped with a cherry for a delicious, creamy treat that is like an Italian soda all dressed up.

The flavors work well together, with the unsweetened coconut syrup balancing out the sweet soda and the heavy cream mixing in well to create a velvety consistency that we haven’t had from a Coke. It’s lighter than a float, denser than a soda and sits somewhere in the middle. Somewhere we weren’t expecting to enjoy, but were surprised that we really did. This is the best of the three drinks and it’s the only one that we would revisit on future trips.

Grab this drink at Hollywood & Dine at Universal Studios Hollywood.

This is a “refreshing Fanta® Orange with vanilla soft serve ice cream, topped with whipped cream and a cherry”.

We were unimpressed with this float. It is just run-of-the-mill soft serve in some Fanta Orange. Our Team Member at Mel’s neglected the whipped cream and cherry, and was none too prompt with serving the float after it had been poured, leading to an icy, soupy mess. That being said, even as it was melting we could tell that there wasn’t anything exciting with the flavor profile. It is a classic orange soda and ice cream float, but the orange soda isn’t particularly good and the soft serve is just regular vanilla.

We can’t be too upset about it — at the end of the day, we’re still sipping a float in a theme park, so it’s going to be a good time — but Mel’s has done better work with floats in the past that were more enjoyable than this one was. At this price point, there are better snacks, better frozen treats, better floats not only at USH overall, but even at this same restaurant. Don’t waste your appetite on something as average as this.

This drink can be found at Mel’s Diner in Universal Studios Hollywood Upper Lot.

This drink is a “delectable blend of passionfruit-flavored Sprite® and rich cream topped with a cherry”.

This is what we call “an almost.” It has all the right flavors in play on paper, but it just didn’t come together as well as it could have. The passionfruit syrup is topped with Sprite and then a float of heavy cream and a cherry, much like the Hollywood Coconut Cream upstairs. But whereas that one combined into a creamy treat that was less sweet than we expected, this one did the opposite.

The cream never quite mixed in for some reason, leaving it suspended in, but not mixed within the Sprite. The passionfruit syrup was sweet but not particularly strong of flavor, offering more of a subdued take on the flavor note than a full-on passionfruit syrup could be expected to bring. That’s not a bad thing, there was plenty of it to mix beautifully with the Sprite and this on its own would have been a wonderful drink. The cream that didn’t mix was the downfall of this, as the bits of suspended cream left the palate feeling greasy by comparison to the lighter, refreshing soda. Almost like eating a big block of cheese alongside your light, tropical soda. We get the idea of what they were going for, and all the pieces were there flavor-wise, but it just didn’t land as well as it could have due to the cream. Hence, it’s “an almost.”

You can find this drink at Jurassic Café in Universal Studios Hollywood Lower Lot.

Are you going to grab any of these Secret Menu drinks on your next visit to Universal Studios Hollywood? Let us know in the comments.