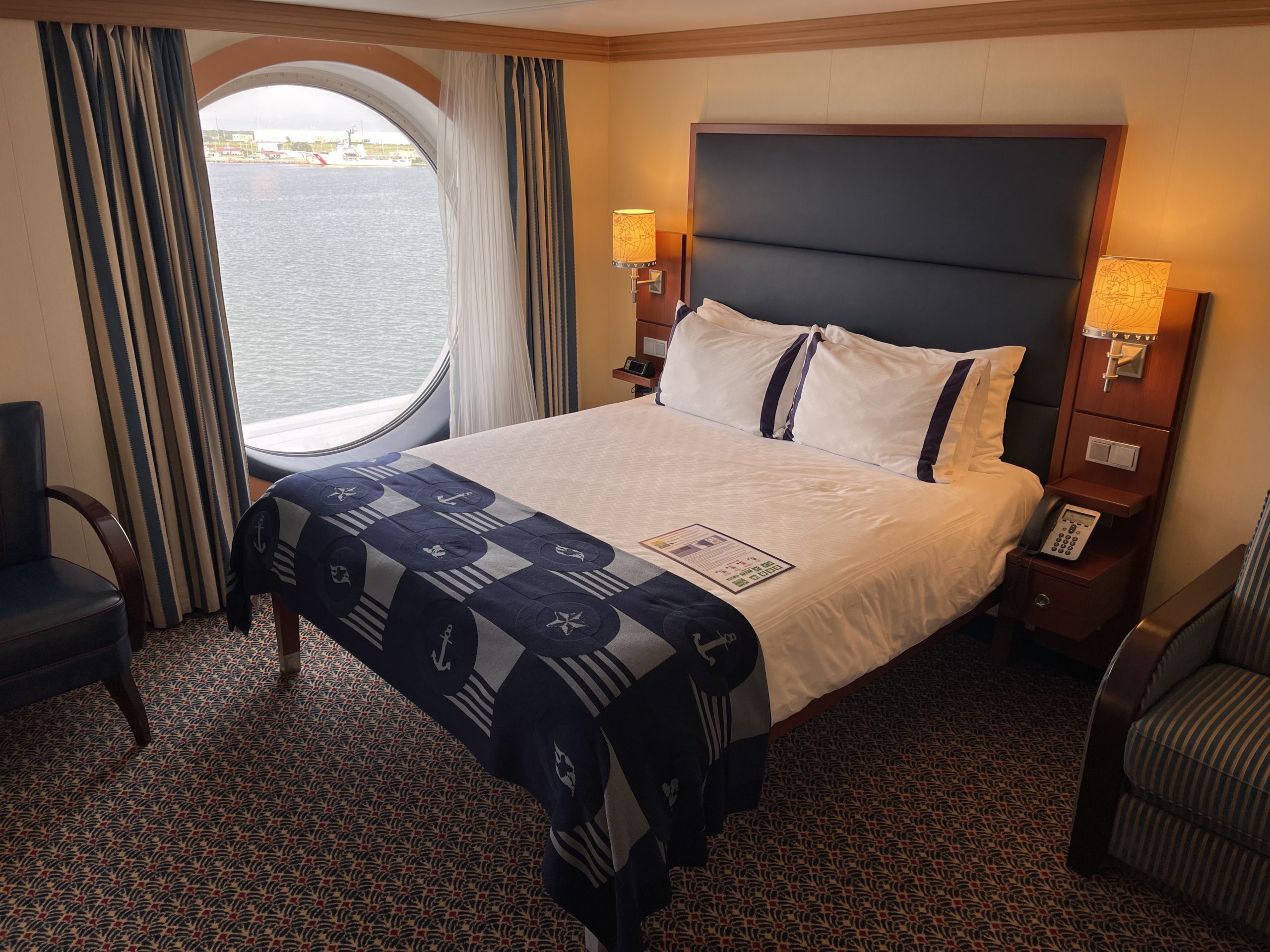 Join us for a sailing on Disney Cruise Line’s Disney Fantasy. We recently stayed in an accessible deluxe family oceanview stateroom.

As an accessible room, it has more space for a wheelchair and other assistive devices.

The carpeting, furniture, and decorations are similar to those found on other Disney Cruise Line ships. Also like other cruise ships, you need to put your room key (or another card) into the slot by the door to control the lights.

The blue-striped sofa folds down into a bed, and another bed folds down from the ceiling. The table opens up to provide extra storage.

The artwork above the sofa is a series of squares featuring Disney characters made of white rope and other nautical icons.

Also unlike standard staterooms, there’s no step up into this bathroom. There’s no step into the shower either, the bathroom has an entirely flat tile floor. Grates outline the shower area, and another grate is at the threshold of the door.

The tile is mostly white, with some red and blue tiles. The curtain is white and decorated with Mickey-shaped knots. It wraps all the way around the shower area.

The shower has a detachable showerhead. Shampoo, conditioner, and body wash are in pumps on a small shelf. There are two more metal shelves and H2O+ soap.

To flush toilets on Disney cruise ships, you must shut the lid first to access the button on the back wall.

There’s a single sink vanity, with a trash can mounted below. The towels are all branded with the Disney Cruise Line logo.

There are two glass shelves with small railings to either side of the mirror. The railings, which can also be found on shelves in the bedroom, prevent items from sliding off during turbulence.

The bed has a blue padded headboard. There is a blue bed runner featuring nautical symbols and Mickey Mouse.

The Disney Cruise Line logo is patterned on the white bedding and pillowcases. The pillowcases also have dark blue stripes at the edges.

The lampshade at the side of the bed resembles a globe. All the Disney Parks (except Shanghai Disneyland) are labeled with castles, and it features all the Disney Cruise Line ships (except the Disney Wish).

The end tables are built into the wall and include small shelves and drawers. The clock is on one side, the phone is on the other.

There are two portholes, with cushions at the bottom for sitting or leaning. There are sheer white curtains and striped curtains to pull across them.

There are two blue chairs that can be moved around the room.

They have wooden arms and legs and red piping.

The desk unit is attached to the wall.

It has several shelves around a mirror.

The TV is on an adjustable arm so it can be angled in different directions.

There are several different outlets. The switches control the vanity lights.

There are a few drawers.

The center drawer has a Mickey pull handle.

There’s a short red velvet chair at the desk.

This cabinet hides the mini-fridge.

There are two closets behind shuttered doors.

There are life vests in the closets of every room. The safe is on a shelf in the larger closet.

The ladder for reaching the ceiling bed is in the second closet. Cast Members take care of opening the bed and setting up the ladder each night.

Watch our video tour of the accessible Disney Fantasy room below.