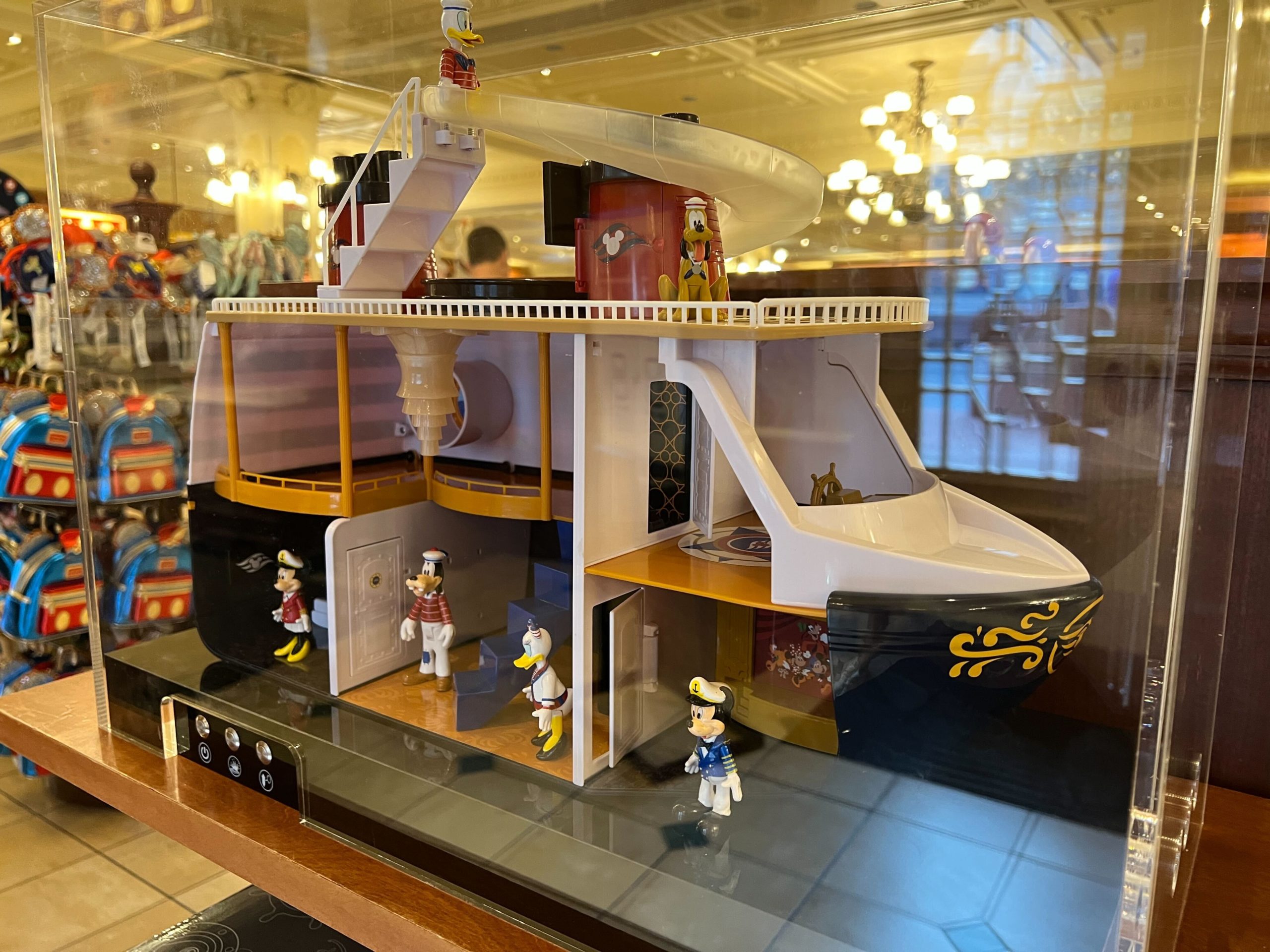 Look what we found docked at the Emporium on Main Street, U.S.A. in the Magic Kingdom —a Disney Cruise Line Ship Playset. If you want to give this as a gift this holiday season and are not planning a trip to Walt Disney World, then cruise on over to shopDisney.com, where it’s also for sale.

There are numerous details in this playset, including the scroll work, the Disney Cruise Line logo with its three-wave stripes, and the Mickey head on the forward of the ship. One side of the ship shows the decorative exterior, while the other side opens to show the interior.

The display model at the Emporium has buttons on the base to demonstrate some of the interactive features, such as the pool splash and the sound of the ship’s horn; however, they were not working during our visit.

Mickey Mouse and pals can visit six areas of the ship: the bridge, the two levels of the lobby atrium, a guest room, the Walt Disney Theater, and the pool with a slide.

Making this playset shipshape are additional furniture accessories, including a grand piano, sofa, two chairs, and bronzed statue of Mickey at the wheel.

A working door leads to the ship’s bridge. In fact, all the doors on the ship open and close. The floor is detailed with a Disney Cruise Line logo. When you turn the working captain’s wheel, the ship’s horn sounds.

In the Walt Disney Theater, you can scroll through different images on the stage.

On top of the playset are the two ship’s stacks in the signature red and black with the Disney Cruise Line logo on each of them. In the middle are a pool with Mickey’s head and a working slide. A splashing sound can be heard as one of the characters comes down the slide and into the pool.

A closer look at one of the guest cabins shows another working door. In addition, the bunk beds pull down, and the TV swings out.

In the lobby atrium, passengers can either go up the grand staircase or use the working elevator. The lobby chandelier lights up to make the cruise even more special.

This Disney Cruise Line Ship Playset is recommended for ages 3 and up. It measures 13” H x 7” W x 20” L and 2 x AAA batteries are included.

For a closer look, check out our video unboxing the ship playset (and other merchandise from our cruise aboard the Disney Wish) below.

Will you be wrapping this up for someone special this holiday? Let us know in the comments below.

See the following articles for more news about the Disney Cruise Line: