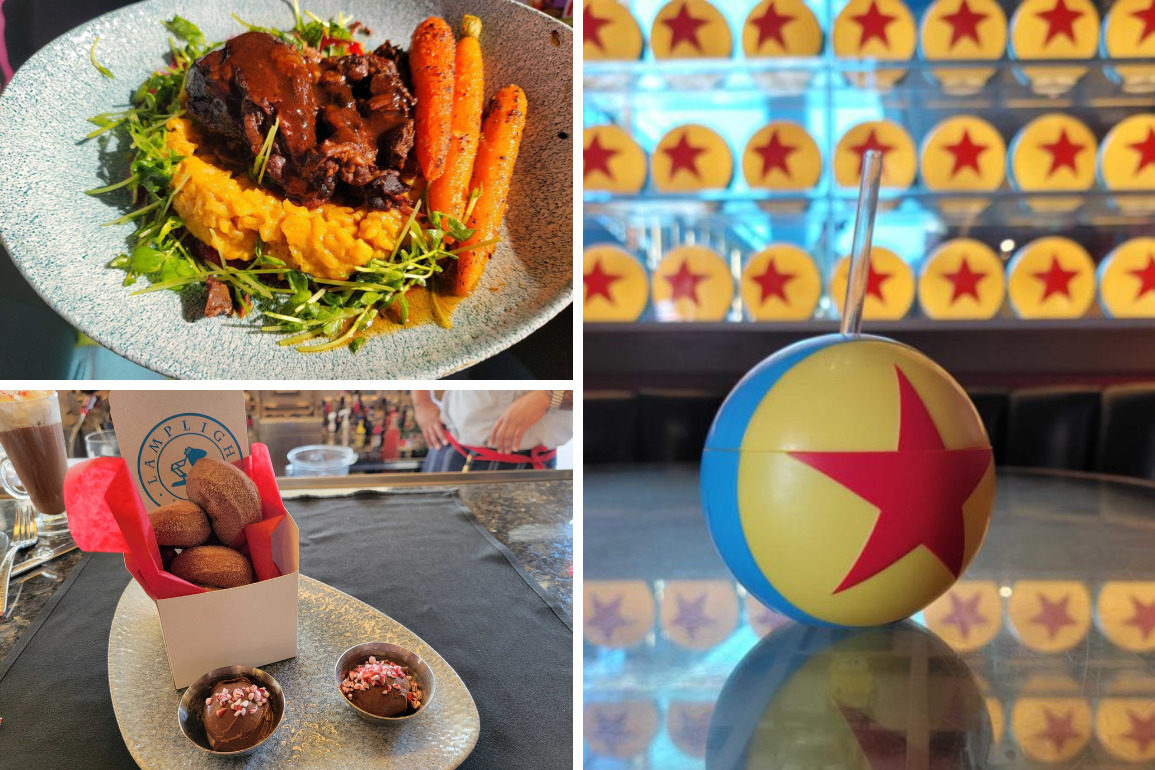 Several returning items, including the delicious peppermint donuts, are joined by the Braised Winter Beef at Lamplight Lounge in Disney California Adventure. You can also get a Pixar Ball Sipper here!

This was only okay. The beef is tender and juicy, but not particularly interesting. Slow cooked beef is good on its own, but there’s nothing really special about it, either in seasoning or with the gravy.

The risotto was more interesting, with a definite sweet characteristic from the carrot, and then when paired with the side of roasted carrots, this was actually more enjoyable than the beef.

Mixed into the carrot risotto, they’re a lovely garnish, but the flavor gets lost to the power of the risotto. On their own, they are fantastic little salad that helps to cleanse the palate between the hardier, creamy risotto and rather mundane beef.

For the Braised Winter Beef at this price point, we would hope to be more impressed.

This one presents a tough decision — do you eat the light, crispy, fluffy donuts on their own, or do you spread the chocolate sauce on each bite? Either way you choose, you’re in for a fantastic snack.

The donuts are perfectly crisp outside, and warm and fluffy inside. The dusting of cocoa elevates these from a donut to a dessert in its own right.

The chocolate sauce is so thick that it isn’t for dipping, more like spreading with a knife. It’s chocolatey and slightly minty, with crushed candy canes atop.  Overall, a fantastic dessert or snack worthy of Instagram fame.

The Pixar Ball Sipper is, unsurprisingly, shaped like the Luxo Ball.

It has a clear reusable straw.

It also has a flat base so you can set it down.

The Disney Parks Blog initially announced that the Holiday Martini and Peppermint Vanilla Vodka Hot Chocolate were returning this year, but upon speaking to Cast Members, it seems the seasonal drinks are not the same every day. We recommend talking to the host or your server about the options at the time of your meal.

The holiday season at Disneyland runs from November 11 through January 8.