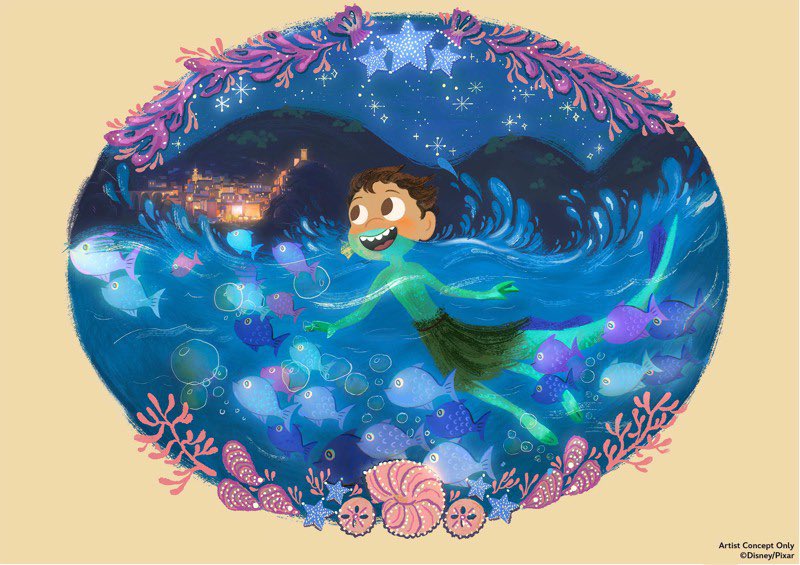 As Disneyland Paris continues its expansion of Pizzeria Bella Notte Restaurant, a quick-service restaurant in Fantasyland, it was announced that a “Luca” inspired dining room will also be added. Taking over Fantasia Gelati, the new area will be known as Andiamo!

When the opportunity to expand the restaurant arose, Imagineers naturally thought about the fan-favorite sea monster to add to the variety of characters represented in the park. This new themed area will bring a seaside atmosphere with lots of details and objects evoking the local fishing culture and cuisine that you can find in Luca’s hometown of Portorosso, in addition to providing further space for guests to enjoy Italian specialties.

“’Luca’ is a beautiful coming-of-age tale that reminds us of the beauty of acceptance, of one another but also from within. Discovering who we are can be a daunting challenge, but friendships can help us on that journey,” shares Tracy Eck, Art Director at Walt Disney Imagineering Paris – Design & Show Quality. “I’m really happy that we are able to bring elements from the story of ‘Luca’ here to Fantasyland.”

Since its opening in 1992, Fantasyland has been a vibrant homage to the European fairy tales and storytellers, a timeless place where the magic of animation meets the architectural styles and cultures of the countries they are inspired from. Pizzeria Bella Notte is no exception with its peaceful and romantic atmosphere which pays homage to various regions of Italy. This iconic restaurant features nods to the classic Disney stories “Lady and the Tramp” as well as “Fantasia” and will now be home to another classic that has charmed families around the world: Pixar’s “Luca.”

Taking place on the Italian Riviera, “Luca,” streaming on Disney+, tells the story of a young boy experiencing an unforgettable summer filled with gelato, pasta, and endless scooter rides. Luca shares these adventures with his newfound best friend, but all the fun is threatened by a deeply held secret: they are sea monsters from another world just below the water’s surface.

Are you excited to see “Luca” being represented in a Disney Park? Let us know in the comments below.