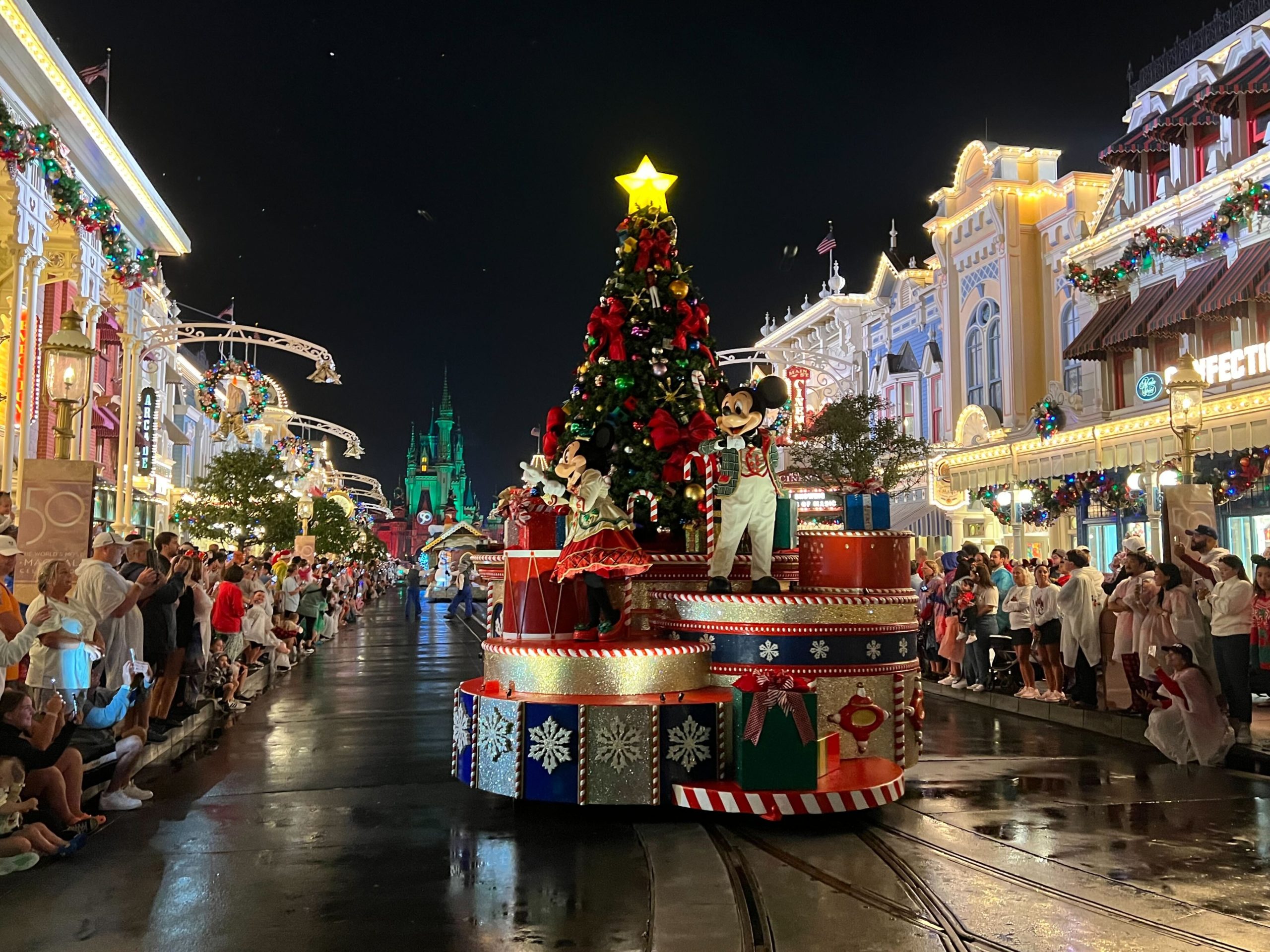 They’ve decked the halls and baked a bushel of festive treats — now it’s time for Mickey’s Once Upon a Christmastime Parade at the 2022 Mickey’s Very Merry Christmas Party. After being absent in 2020 during the COVID-19 restrictions, the parade returned (and was the first parade to return) to Walt Disney World last year.

Guests with tickets to Mickey’s Very Merry Christmas Party can catch the parade nightly at 8:30 p.m. and 11:00 p.m. At this time, no daytime performances of the parade have been announced.

This parade is not the same as the one filmed for the Disney Parks Magical Christmas Day Parade broadcast on ABC each year.

Mickey’s Once Upon a Christmastime Parade 2022

Mickey and Minnie lead the parade on a very festive float. The base is decorated with snowflakes against sparkling silver and blue backgrounds. A tall Christmas tree topped with a bright star is behind the couple.

Mickey and Minnie are in their Christmas finest. Mickey has a three-piece suit with white pants and a green jacket. Minnie has a white jacket over a red skirt and bright red shoes.

Wreck-It Ralph follows in front of a little gingerbread house with neon hearts on the roof.

Clarabelle Cow is baking up a storm. Her float resembles a cozy kitchen. Cookie cutters hang from the top while all sorts of baked goods, sweets, and ingredients can be spotted.

Clarabelle is in a festive red dress with an apron and bright green shoes.

Peppermint-striped dancers lead the way for Goofy and his candy float.

Goofy pedals a bike to drive the float. A peppermint is on the front while a giant gumball machine is perched on the back.

All seven dwarfs marched down the rainy streets of the Magic Kingdom.

Just behind them was a royal float of princesses, including Cinderella, snow White, Tiana, Ariel, Rapunzel, Belle, and Jasmine.

The Toy Story gang (even Forky!) are here to spread Christmas cheer. Woody, Bo Peep, and Bullseye are atop a tower of blocks.

The march of the Toy Soldiers is always a hit.

A giant lighted present heralds the beginning of the end of the parade.

The reindeer dancers are another crowd favorite.

Finally, he’s here! Santa Claus rides in on his cherry-red sleigh. The float is covered in “snow” with large lit snowflakes.

This version of the parade that we saw on the first night of Mickey’s Very Merry Christmas Party was shorter than the full version due to inclement weather. Watch our full video of the modified 2022 Mickey’s Once Upon a Christmastime Parade below.

Click here for the full 2022 Mickey’s Once Upon a Christmastime Parade.