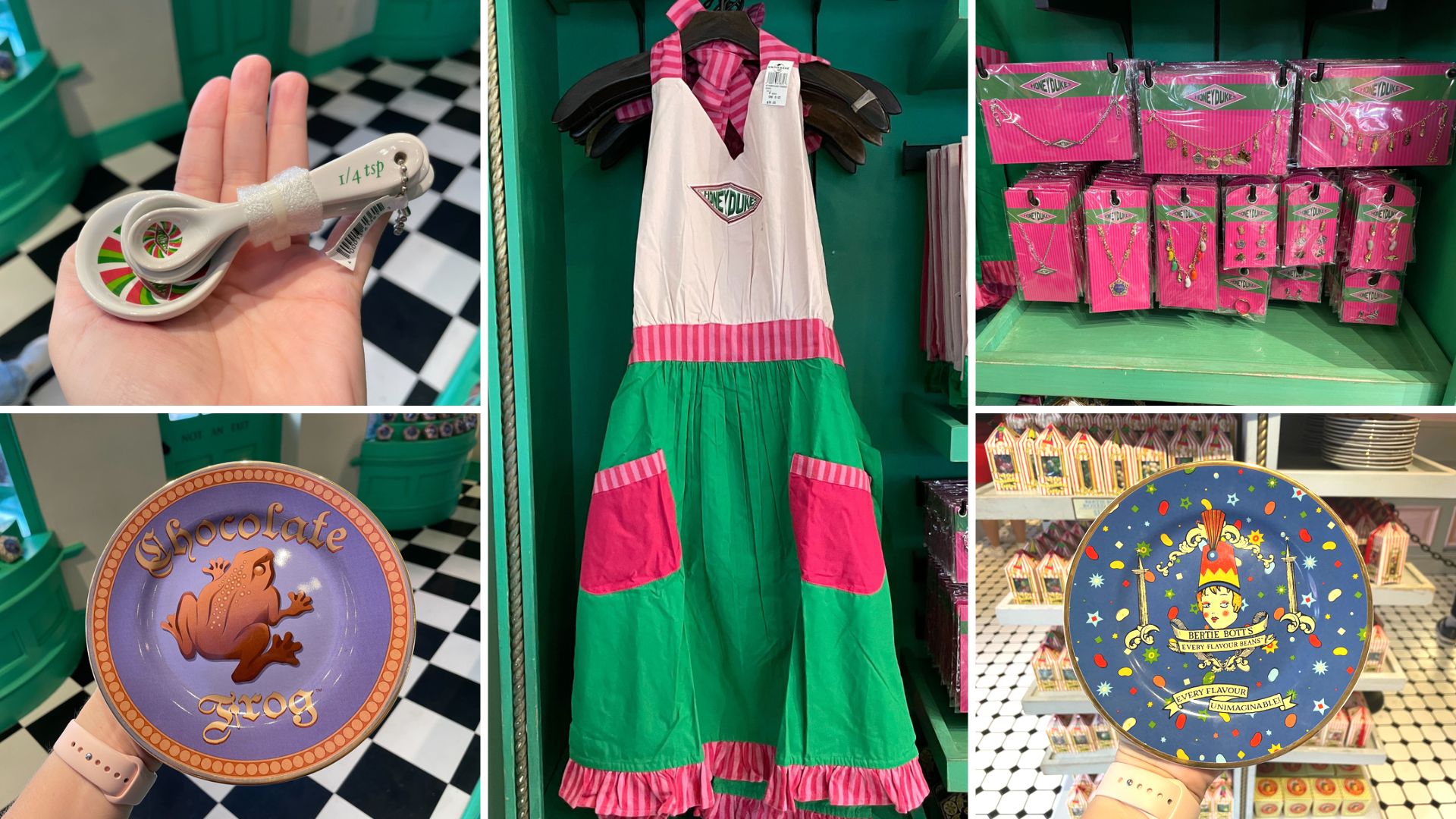 Honeydukes in The Wizarding World of Harry Potter – Hogsmeade at Universal’s Islands of Adventure has several new houseware items, an apron, and a collection of jewelry.

There are three new plates, a bowl, and a set of measuring spoons.

The bowl is dark blue, with a golden rim.

A sculpted chocolate frog is on the interior edge of the bowl.

“Chocolate frog” is in golden lettering on the side.

The spoons are white, with their sizes on the ends of the handles.

The dips of the spoons feature the Honeydukes logo over a red, green, and white peppermint swirl background.

They come on a chain.

This plate is purple, with a (flat) chocolate frog in the center. “Chocolate frog” is in gold letters around it and the edge is brown with circles.

All of the plates are white on the back.

This plate is white with thin red stripes, like the packaging of a Bertie Bott’s Every Flavour Beans box.

We found this last plate at Sugarplum’s in Diagon Alley. It’s blue, with the Bertie Bott’s face logo at the center, above the name of the jelly beans brand. “Every flavour unimaginable” is below that, and the plate is covered in images of colorful beans and stars.

The skirt of the apron is green while the top is off-white.

The diamond-shaped pink and green Honeydukes logo is on the chest.

It has striped pink trim and straps, as well as two pink pockets.

This silver bracelet has the Honeydukes logo connecting two sections of chain.

The edge of the logo has tiny green gems.

The necklace has a matching charm on a silver chain.

These earrings have green gem studs, with the Honeydukes logo dangling as charms.

One of them resembles a chocolate frog box. A heart-shaped charm is imprinted with “Chocolate Frog.”

The necklace has a golden chain with four small golden frogs on it.

There are three pairs of studs in this set: golden frogs, Chocolate Frog boxes, and large brown frogs.

This bracelet has several bean-shaped charms, as well as charms of the Bertie Bott’s logo faces.

The necklace has the same charms as the bracelet, plus a few solid-colored beans.

One pair of earrings is light purple beans with yellow and green spots. The other two pairs of studs are faces.

Will you be using these kitchenwares and wearing this jewelry at your next “Harry Potter” party? Let us know in the comments and check out all of the holiday decorations at The Wizarding World of Harry Potter.