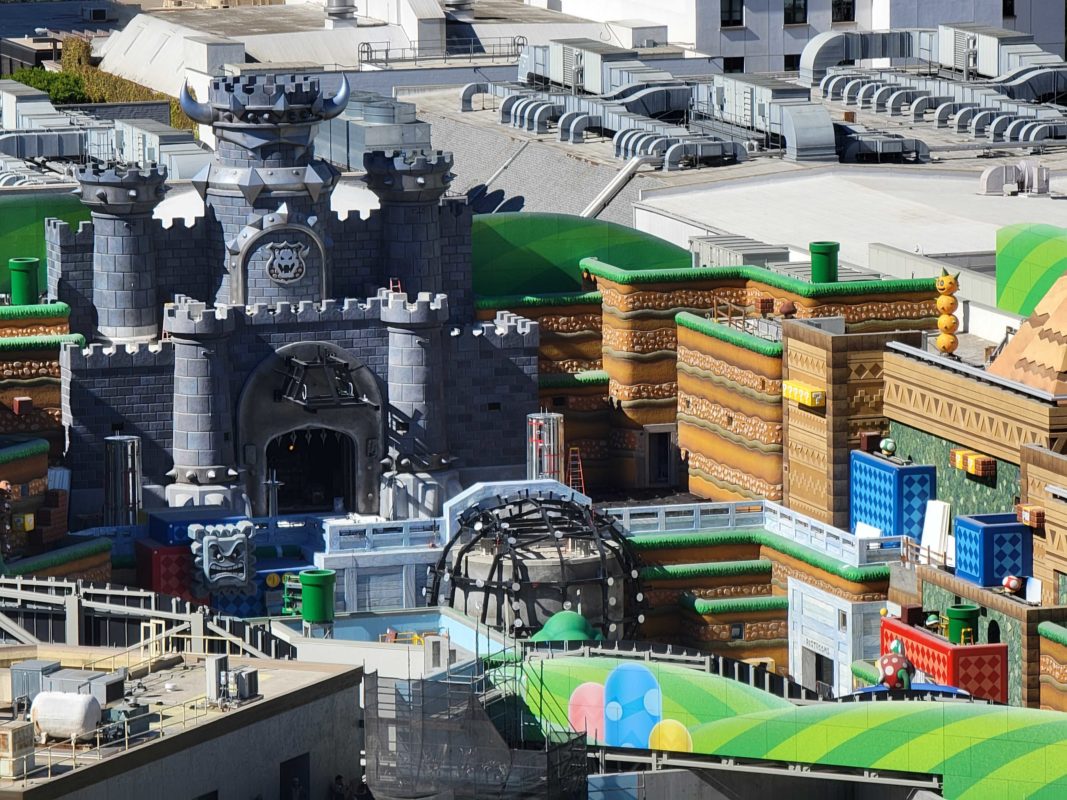 The land has come a long way in the past year, with themed paneling now covering most of the buildings, bringing to life Bowser’s castle, Mount Beanpole, Princess Peach’s castle, and more.

A Super Nintendo World marquee was installed at the land’s future entrance a few months ago. It sits against colorful blocks.

Guests will enter through a pipe-like tunnel, which has yet to be painted but the shape is clear.

Princess Peach’s castle is right past the entrance. Since our last construction update, towers and paneling have been installed. Now pink turrets now poke out from behind the green hills.

Piranha Plants and coins sit on the nearby towers. Once completed, many of these small elements will move.

There are four pyramids looming over the land. A Pokey cactus is next to the largest pyramid. Red and green mushrooms are on the platforms beneath them. In the center of the land is a Mario flag, right next to a green pipe.

A dome of support beams cover a concrete structure in front of Bowser’s castle, perhaps Hollywood’s version of the mushroom-shaped Kinopio’s Cafe.

Another series of supports stick out of the front of Bowser’s castle.

A giant sculpted Bowser head will be added to these supports, looming over guests as they enter the castle.

We could just barely see a stone wall and a rounded piece sitting inside the castle.

Yoshi was installed this summer and is still visible, now shaded by a tree at the center of the photo above.

At the back of the land, behind Mount Beanpole, is a wall painted to look like a blue sky with cartoon mountains right out of the Yoshi video games.

On the ground, pieces of camouflage scrim have been added to the fence in front of the Super Nintendo World entrance. The camouflage is meant to match the adjacent Transformers: The Ride 3D.