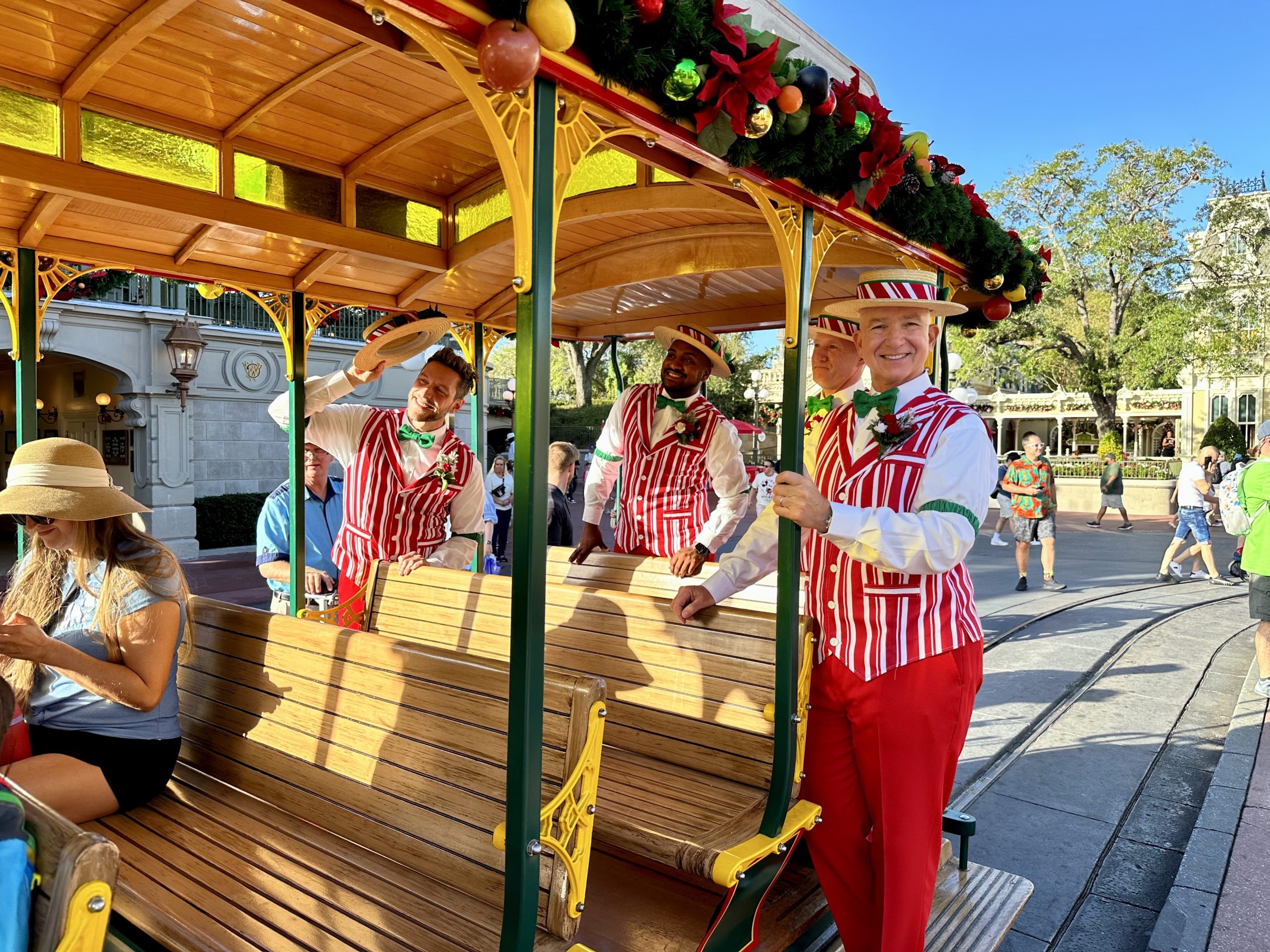 Good morning! We have a full day planned with stops at Magic Kingdom, Disney Springs and Disney’s Hollywood Studios. As always we will report on all the new things we find today. Let’s get started.

There was also a gingerbread house menu hanging on the back of the house.

As soon as we walked into Magic Kingdom we were greeted by The Dapper Dans in their holiday outfits.

More windows have been decorated on Main Street, U.S.A.

These windows display many of the Christmas merchandise you can purchase inside the Emporium.

Let’s do some shopping inside the Emporium.

In the Emporium, Mickey’s vintage Christmas ornament is now available. This ornament is clear and features the number “1971” on the right Mickey ear with fireworks, and the castle on the left ear.

We also spotted this “The Merriest Place on Earth,” pitcher.

There was also a new Mickey Mouse two toned collection. This collection included a bracelet, ring, necklace and earrings.

More decorations have popped up at Tomorrowland Speedway to prepare for the holiday layover.

Some new Christmas treats have arrived in Big Top Souvenirs.

Mele Kalikimaka! In Adventureland, a new photo op has arrived. The photo op features the birds from Walt Disney’s Enchanted Tiki Room, Pierre, Jose, Fritz and Michael all wearing Santa hats for the holiday season. Orange Bird is also featured on the photo op with a Santa hat.

We stopped into Disney’s Contemporary Resort to see if we could find anything new. In Bayview Gifts a new Mickey Mouse Piglet pink pillow is available. The pillow was fluffy and features the same design at the Piglet pink spirit jersey.

A Mickey Mouse and friends faux fur jacket for adults was available in Bayview Gifts at Disney’s Contemporary Resort. This jacket features Mickey and Minnie on the front with Goofy on the right sleeve.

The back of the jacket features Pluto, Donald Duck and Daisy Duck on the left sleeve.

We made our way to Disney Springs to see what other items we could find. At World of Disney we noticed the windows have been decorated for Christmas.

A new “Alice in Wonderland” Loungefly mini backpack has arrived in World of Disney.

The best part about this “Alice in Wonderland” mini backpack is that you can celebrate your Merry Unbirthday everyday!

A new limited edition of 1,600 runDisney MagicBand was available in Disney’s Pin Traders at Disney Springs. This MagicBand is black with a runDisney design featuring the wording, “Every Mile is Magic.”

In Marketplace Co-Op a three tiered Disney x Ann Shen tray is available. This collection features designs from “The Aristocats.”

In Disney’s Days of Christmas, new Marvel ornaments have arrived. There is a Black Panther light-up living magic Sketchbook ornament.

There was also a Jack Skellington dome Sketchbook ornament from Tim Burton’s “The Nightmare Before Christmas.”

We also spotted a “Yule Be Merry,” Groot and Rocket themed holiday stocking.

And a Marvel holiday pair of pajamas pants available in Disney’s Days of Christmas.

Snow White merchandise has arrived in World of Disney at Disney Springs. There was a new Snow White tumbler with straw available.

There was also an abstract “Snow White and the Seven Dwarf’s” insulated mug.

We also spotted this Snow White picture with frame.

And finally a “Snow White and the Seven Dwarf’s” 85th anniversary T-shirt.

We decided to head over to Disney’s Hollywood Studios to see what else we could find today.

The Kylo Ren and the First Order mini show has returned to Star Wars: Galaxy’s Edge in Disney’s Hollywood Studios.

You can watch a video of the show here.

A Pixar hot cocoa mix is available in Celebrity 5&10 at Disney’s Hollywood Studios.

We spotted some new T-shirts in Legends of Hollywood, including this Mickey & friends retro design T-shirt.

And a ringer T-shirt featuring Lotso from “Toy Story 3.”

There was a Walt Disney World 1971 black, purple and blue designed pullover sweatshirt in Once Upon a Time.

We hope you enjoyed following along with our day!