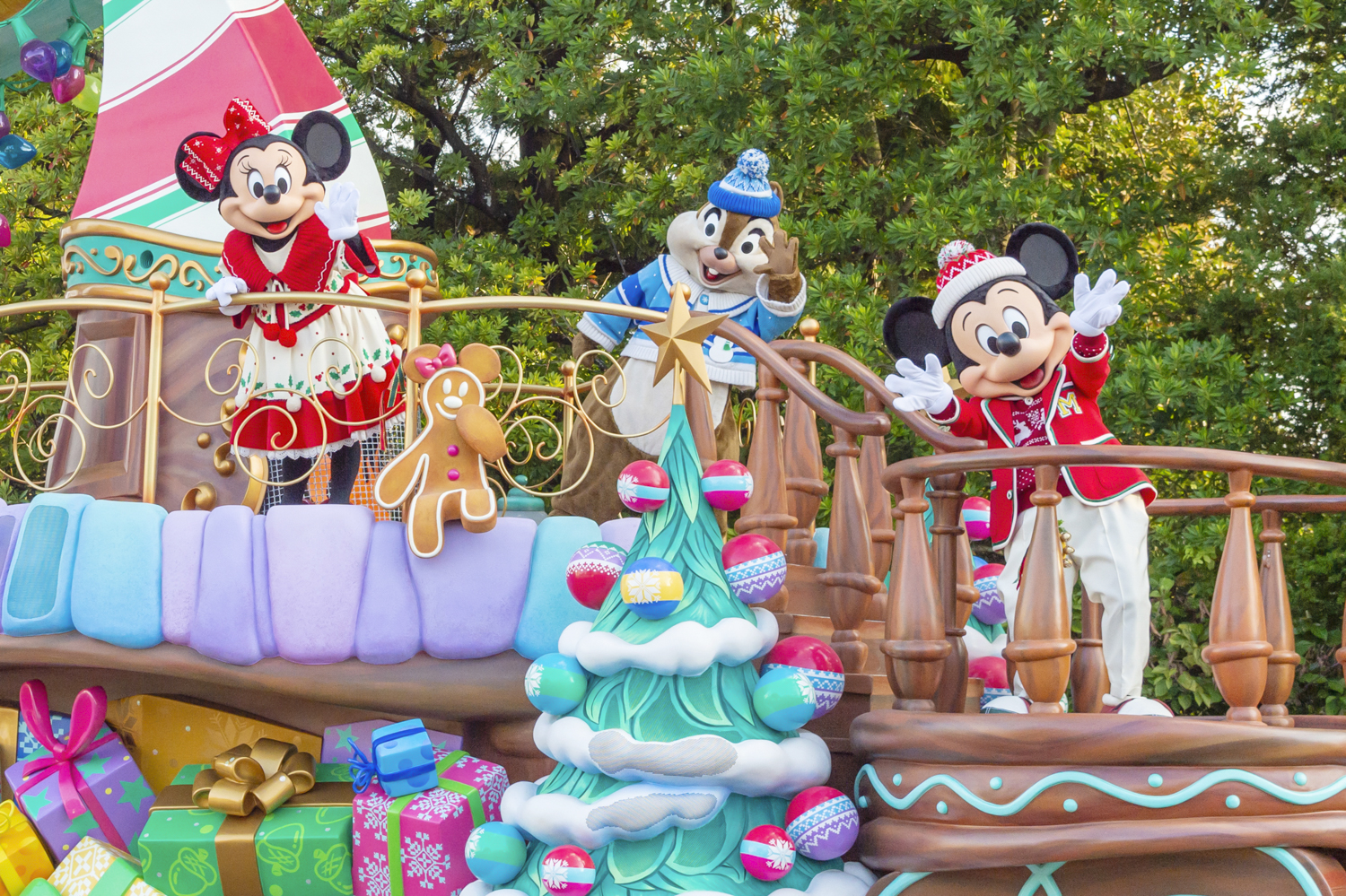 We need a little Christmas now, and fortunately, Disney Christmas has kicked off just in time at Tokyo Disneyland! For the first time since 2019, the “Disney Christmas Stories” parade has returned to the park, albeit with a few changes. So let’s explore this returning parade, now in its sixth year.

The parade is led off by Santa’s elves.

First up, we have Donald’s boat with Donald, Daisy, and Scrooge McDuck. Huey, Dewey, and Louie are absent to comply with distancing regulations.

Next are the “Toy Story” friends Woody, Jessie, and Buzz Lightyear with tons of presents.

Snow White and her Dwarves are spread across a delightful float that features a stylistic organ much like the one in the classic film.

Pluto and a group of reindeer gallivant down the route to lead some of our most iconic Disney pals!

Right in the middle of the parade are Mickey, Minnie, Chip, Dale, Max, and Goofy. We were glad to hear the original voices of Mickey and Minnie in Japanese, Takashi Aoyagi and Yuko Mizutani, were both preserved in the parade once again! Most performances of this dynamic duo have been replaced as entertainment cycles through at Tokyo Disney Resort, with “Disney Christmas Stories” and “Tokyo Disneyland Electrical Parade: DreamLights” being their last bastions.

Max and Goofy head off the float, which looks like a very Toontown holiday!

Lilo and Stitch are ready to say Mele Kalikimaka to you and your ‘ohana! Angel is usually part of this float, but she was excluded this year for distancing.

It was a warm day, so Belle must’ve felt a bit toasty in her beautiful holiday dress. Other characters and iconography from “Beauty and the Beast” were part of this float, although the Beast is absent this year.

And rounding off the parade are Anna, Elsa, and Olaf in a very “Frozen” float.

Sadly there were no dancers in the parade this year, as all parades are still without them at Tokyo Disneyland. Hopefully, we see the return of dancers next year, and a new Christmas parade while we’re at it.

You can check out a full video of “Disney Christmas Stories” above.

Check out this year’s special Disney Christmas food and merchandise here on WDWNT, and let us know what you think of the parade in the comments below!

Photos courtesy of the Oriental Land Company. Used with permission.