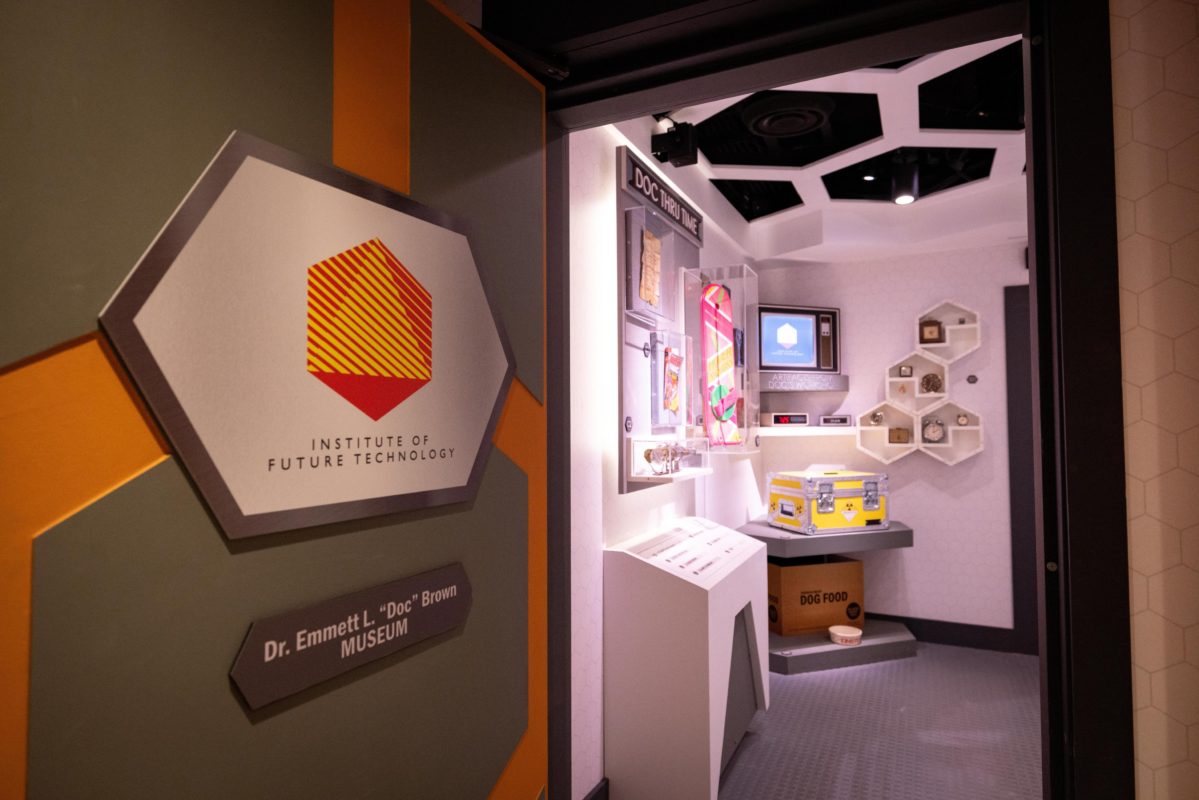 The second escape room of the new attraction in Universal CityWalk Orlando is inspired by “Jurassic World” — but we’ll be escaping the Indominus Rex later.

Posters outside feature the attraction logo: a film reel lock.

Team Members were excited to welcome the first guests today.

Costumes from “Jurassic World” and “Back to the Future” are in the lobby, which resembles a movie theater.

The first bar is tucked into a corner on the first floor.

There’s an accessible section of the bar for wheelchair users.

In addition to cocktails and mocktails, there are also snacks like M&Ms and nuts available.

A screen in the lobby shows movie trivia.

There are plush armchairs and couches throughout for guests to wait and relax.

There’s another bar on the second floor. you can read our review of every themed cocktail here or watch them in the video below:

You can bring drinks into the escape rooms, but you’ll want to keep your hands as free as possible.

Retro movie theater seats are in a balcony area.

There’s also an outdoor balcony — though it lacks any theming.

This costume, near the downstairs bar, is Doc Brown’s from “Back to the Future Part III.”

There is an elevator in addition to the stairs.

A sign lists warnings for the escape rooms, which include strobe effects, fog effects, and enclosed spaces. It also notes that no photography or video recording is allowed inside the escape rooms.

You can take personal items into the escape rooms, but lockers are also available for $5.

You can watch spoiler-free and spoiler-filled reviews of the experience below, or continue down the post for our spoiler-free text review.

The name of the escape room is a reference to the “OUTATIME” license plate that falls off the DeLorean time machine during its first trip in “Back to the Future.”

Unlike more standard escape rooms, these don’t use locks and keys. It’s more like a walkthrough experience, taking you through eight rooms total. This means multiple groups can go through the experience at one time, with each team in a different room. It also means that there is no backtracking through previous rooms and that it’s very structured time-wise. Each room has four to five different possible scenarios, so you could play the escape room multiple times without experiencing the same thing twice.

After your team checks in, a Team Member leads everybody through an introduction — remember, unless you booked a private experience, you will probably be placed with strangers. The Team Member had us give our names and favorite movies for an ice-breaker.

The team then goes into a small room with two screens explaining some of the basic rules, like no climbing and no use of force. If you need to exit the experience before “escaping,” make an X with your arms, and Team Members will lead you out.

This is an amazing experience. It’s designed so guests who aren’t familiar with “Back to the Future” can enjoy it, but it’s a must-do for “Back to the Future” fans. It’s a loving tribute and a fun dive into every moment of the films that fans love. It takes guests back inside the Institute of Future Technology, which was the home to the former Back to the Future: The Ride at Universal Studios Florida. Though the ride has long gone to the theme park in the sky, the creators wanted to honor it and bring it back (in a way) through the escape adventure.

Some of the Halloween Horror Nights team worked on these, and you can tell from the gloriously detailed rooms. This may be the most heartfelt Universal attraction — ever. It does more to capture what you love about a film than any ride we’ve done at a Universal theme park.

Working with strangers on the puzzles was completely fine. Our team worked cohesively together.

As we said, no videos or photos are allowed in the experience (the above photos were released by Universal). Keep in mind, you are being watched the entire time. That’s how Team Members can help you in case of an emergency.

The experience costs $49.99 per person before 6 p.m. and $59.99 per person after 6 p.m. The ticket price includes general parking for one vehicle per ticket. You can also book a private experience for up to eight guests starting at $300 total.

We can’t recommend this experience enough.