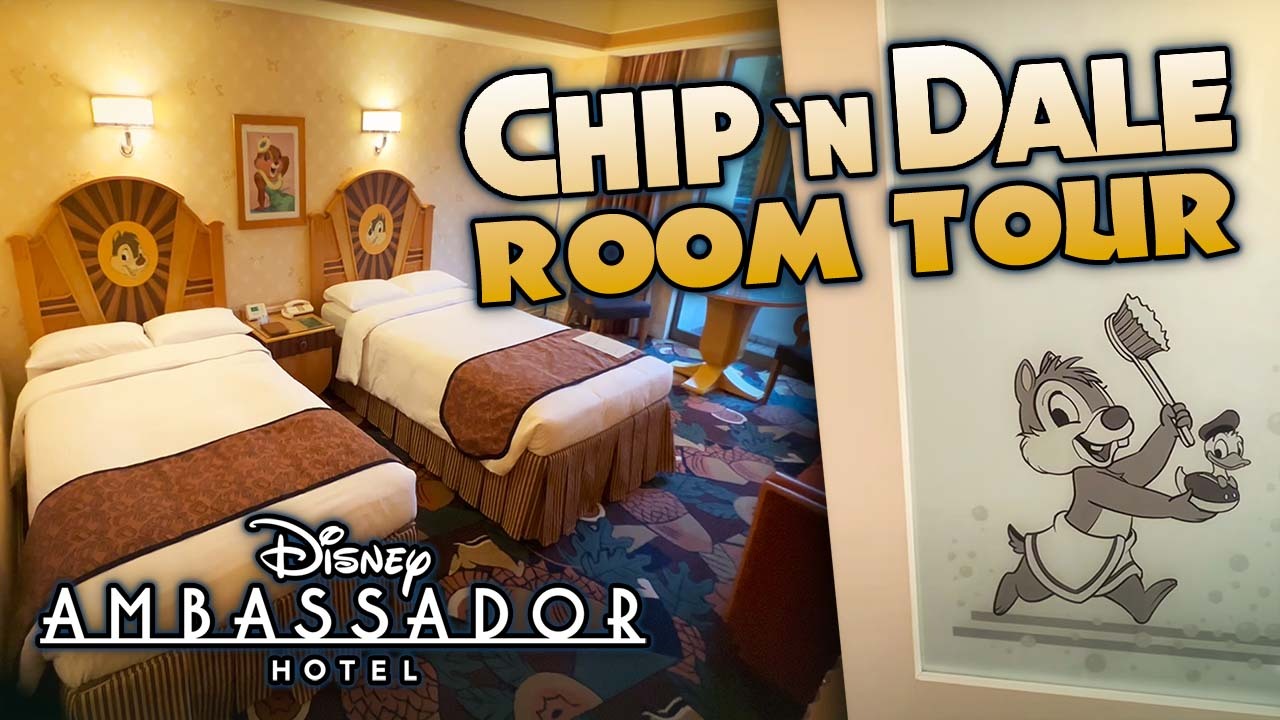 During a recent trip to Tokyo Disney Resort, we stayed in a standard floor Chip ‘n Dale room at the Disney Ambassador Hotel. This hotel is themed to America in the 1930s during the golden age of Hollywood. it features elegant art deco designs and a variety of guest rooms themed to Disney characters. In this case, the room is themed to those beloved chipmunks, Chip and Dale (and their friend Clarice too).

Watch our full video tour of the Chip ‘n Dale room below, followed by the photo tour:

The Chip and Dale theming is in almost every inch of this room, which is mostly shades of yellow and brown.

The lampshades are lined with leaves.

The wallpaper, including inside the wardrobe, features Chip and Dale with acorns.

The wardrobe is right next to the front door.

Spare bedding and hangers are inside. The safe is also built into the wall.

This is also where you’ll find a complimentary shopping bag and slippers.

The white ones featuring Mickey’s face are for adults, while the blue ones patterned with the Ambassador “A,” Mickey, and palm trees are for kids. Both are exclusive to this hotel.

A cushioned bench, with storage for shoes, is next to the wardrobe, under a small vanity space. It looks like a big acorn!

Next to the wardrobe is a kitchenette.

There are shelves for glasses and tea cups.

There’s a kettle and ice bucket.

The mini-fridge is in a cabinet below the coffee bar. Unlike American Disney resorts, free bottled water is provided.

The carpeting features leaves, acorns, and the occasional glimpse of a chipmunk.

A Chipmunk rear can be spotted every so often.

Across from the wardrobe and kitchenette is the bathroom.

The wallpaper in here features Chip and Dale’s faces on stripes.

There’s one sink, beneath an elaborate art deco mirror.

It has a silver frame, with an acorn on the top and frosted images of Chip and Dale in the corners.

The sconces in here have acorns on them.

The complimentary bathroom amenities come in a pouch featuring Chip and Dale.

You do indeed get to take these all home if you wish.

The plastic cup and toothbrushes are branded to the Ambassador Hotel. This used to be common at Walt Disney World hotels up until the early 1990s.

The towels are also Ambassador Hotel-branded and not specific to the Chip and Dale rooms.

A footstool for kids who can’t reach the sink is in the wardrobe.

The hair dryer, hairbrush, and tissues are in the drawers.

The door leading to the toilet has an opaque window featuring Chip brushing his teeth.

The toilet is a standard Toto washlet found in Tokyo Disney Resort hotels.

If you’ve never used a toilet with a bidet, prepare for you life to be forever changed.

There’s a phone on the wall.

Another door, featuring Dale with a Donald Duck rubber duck, leads into the shower room.

The door opens directly into the shower area, with the tub against the back wall.

This layout is standard in Japan.

A handheld showerhead is attached to the wall (there isn’t one in the ceiling).

This room has off-white and blue tiles, and doesn’t feature specific Chip and Dale theming beyond the door.

The bedroom and living space feature an abundance of Chip and Dale.

There are two beds with white sheets and acorn-patterned runners.

One headboard features Dale, while the other features Chip.

A headshot signed by Clarice the chipmunk hangs between the beds. Clarice is a popular character in Japan not often seen at American Disney parks.

The nightstand resembles a giant acorn as well.

The phone clock, and an Ambassador Hotel notepad are on top.

In the drawer are postcards featuring Mickey and his friends. This is another free gift lost at The Walt Disney World resort hotels over the years.

The “Two Chips and a Miss” short was the debut of Clarice.

Across from the beds is the TV stand and dresser unit.

The sofa is red, with brown wood trim.

Two of the throw pillows match the wallpaper, while the other two resemble Chip and Dale’s iconic noses.

If you don’t know how to tell Chip and Dale apart, Chip has a small dark “chocolate chip” nose.

Dale has a bigger red nose.

Above the sofa is an image of Chip, Dale, and Clarice. We believe this was illustrated by Don “Ducky” Williams, but it isn’t labeled.

There are two blue chairs with brown wood arms and legs.

The table design has rounded leaves around the edge.

A swinging door opens out onto the balcony.

Our view was just of the adjacent road and palm trees.

There’s no seating on the balcony, which is pretty small, but you could maybe drag out some chairs if you wanted. This is pretty normal in Japan.