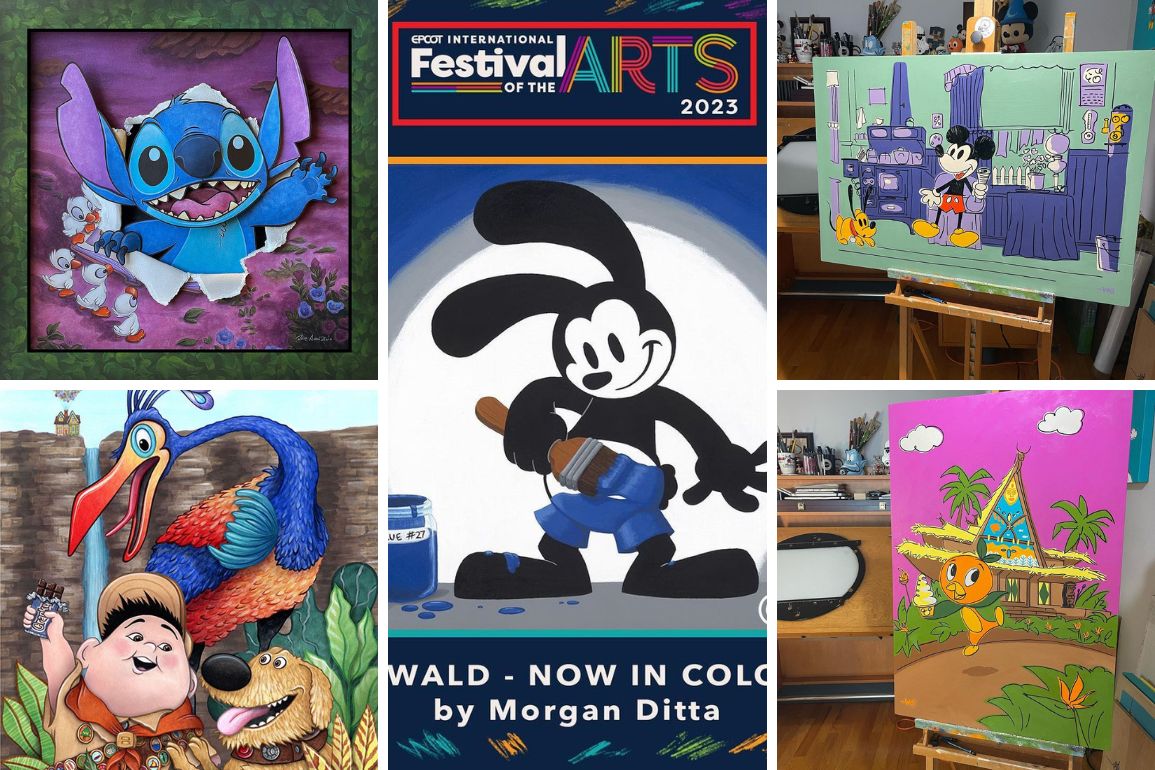 The International Festival of the Arts is returning to EPCOT on January 13, but a number of artists have already begun sharing their original works that will be debuting at the 2023 festival, featuring classic Mickey and Friends characters alongside the likes of Oswald the Lucky Rabbit, “Encanto,” Orange Bird, Stitch, and Russell, Kevin, and Dug from Pixar’s UP, among many others.

An Instagram post by Disney Artist and Design Director Will Gay showcases “Big adventures with Little Orange Bird.” This acrylic painting on birch wood is one of four new pieces being debuted by Gay at the 2023 EPCOT International Festival of the Arts. In this work, the Florida Orange Bird can be seen skipping along with a Dole Whip in hand outside of the Enchanted Tiki Room.

Gay has also shared a look at this Test Track piece, featuring Mickey behind the wheel and his best friend Pluto riding shotgun. Spaceship Earth can be seen in the background along with other EPCOT sketches.

His art will be found in the World Gay has also included his schedule for the 2023 EPCOT International Festival of the Arts:

In Will Gay’s third debuting piece shared on Instagram, his acrylic “Carousel of Progress” features Mickey as “John” while “Rover” has been reimagined as Pluto. This original work features a scene from the beloved attraction in greens and purples and will certainly draw a lot of attention at this year’s festival.

Contract Artist Dave Avanzino will debut “Breakout Stitch” at the 2023 International Festival of the Arts. This original hand-painted piece shows our favorite alien bursting through the classic picture of him reading to the baby ducks. This will be available as a limited edition paper sculpture where Stitch will actually be coming through the background. It will also be available as a limited edition gallery-wrapped canvas and a matted deluxe print.

Avanzino will also debut his original “Best Friends,” featuring Russell, Dug, and Kevin from Pixar’s classic film, “UP.” This artwork will be available as a limited edition paper sculpture, a large framed canvas, a small gallery-wrapped canvas, and a matted deluxe print. The framed original will also be available. Avanzino will be showcasing his work from the festival’s opening day through Sunday, January 29, from 11 a.m. – 9 p.m. He will be present “most of the time” during those dates, and his booth will be located near the Germany pavilion.

Artist Joey Chou makes his return to the International Festival of the Arts, set to showcase his work from the Odyssey building at EPCOT. Marvel’s “Shang-Chi,” Pixar’s “Turning Red,” and Disney’s “Encanto” are three of Chou’s four new works that are sure to draw a crowd at this year’s festival. His fourth work features some beloved Disney cats accompanied by Geppetto’s pet goldfish Cleo, as seen in Disney’s “Pinocchio.”

Chou will be at the Odyssey on the following dates:

Artist Morgan Ditta will showcase “Oswald – Now in Color!” at the 2023 International Festival of the Arts. This piece features Oswald the Lucky Rabbit painting on a pair of blue pants, illuminated by a spotlight in the background. This acrylic painting will be available as deluxe prints and limited edition canvas wraps, alongside the framed original.

As one of four original works, Artist Steph Laberis will debut “Oh I juuust caaaan’t waaaaaaait…” for FOTA 2023. This piece features Simba and Nala riding on top of an ostrich, inspired by the “Just Can’t Wait to be King” scene from the 1994 classic “Lion King” film.

Another of Laberis’ paintings features the Dumbo the Flying Elephant attraction in Disney Magic Kingdom’s Fantasyland. This painting, inspired by the memory of the artist’s Uncle, will make for a colorful reminder of a Disney classic that radiates positivity. Laberis’ other original pieces include “Alice in Wonderland” and an 85th Anniversary tribute to “Snow White and the Seven Dwarfs.”

Laberis will be signing at the Odyssey on the following dates:

Will you be visiting the 2023 International Festival of the Arts at EPCOT? Let us know which piece of art you’re most looking forward to seeing in the comments!

The festival features many food and beverage booths as well as merchandise, chalk drawings, art activities, Disney on Broadway concerts, and more. There will also be two new food studios this year. The International Festival of the Arts runs from January 13 through February 20.

American Adventure Reopening Delayed Until Next Week at EPCOT

Josh D’Amaro Almost Quit Because of Bob Chapek, Christine McCarthy Called Iger in Secret, and More Revealed from Behind the Scenes of Disney’s CEO Shakeup