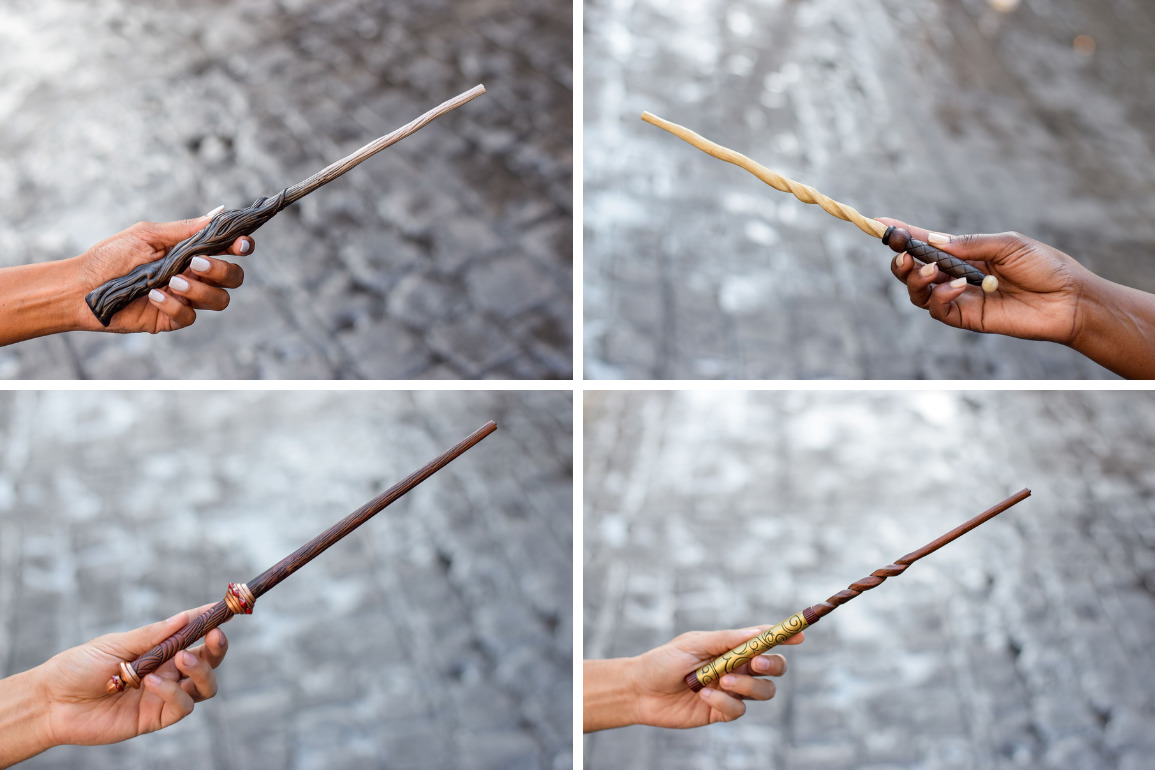 This wand is made of Larch wood with a Phoenix Feather core. This wand features a dark handle with a crisscrossed pattern and bulbous end. The shaft spirals before evening out to a wobbly end.

The lore included with this exclusive wand reads, “Phoenix feather cores are known for sometimes acting of their own accord, often frustrating wand owners. However, this trait can be balanced out by a larch wood wand, as larch is reputed to instill courage and confidence in a caster, thus giving the caster, in certain instances, the ability to rein in an otherwise rebellious core.

A larch wand is also known for allowing its master to realize fully the extent of their talents. When combined with the core that is known to be capable of the greatest range of magic, this wand should allow its owner to excel beyond even their wildest expectations.”

This wand is made of Walnut wood with a Dragon Heartstring core. The wand’s handle also shows a grooved wood design and covers about one-third of the wand. It also curves as if to fit the caster’s hand. The darker colored handle gradually changes to a lighter color. The rest of the wand looks fairly straight with a slight bend. This portion of the wand appears fairly thin overall.

The lore described with this wand reads, “Combining this versatile and adaptable wood with the extraordinary power of a dragon heartstring core is almost certain to result in an exceptionally powerful wand. Walnut wood wants are also most often drawn to highly intelligent witches and wizards, strengthening their creativity and intelligence.

Care should be taken by this wand’s owner, however, as a walnut wand will, once mastered, perform any task an owner of ample intellect desires and dragon wands learn quite quickly. Thus, such a wand could become a genuinely lethal weapon in the wrong hands.”

The lore included with this Wizarding World wand states, “The cherry tree is most known for its beauty, yet wands made from this wood are far from decorative. Cherry wood wands can have unusual and often deadly powers. However, the deadly power of the wood of this particular wand is seldom misused, being that a wand with a unicorn hair core is the least susceptible to dark magic.

In certain cultures, the cherry tree itself is a symbol of good fortune, and bearers of cherry wands are respected. But whatever magic the wand’s wielder unleashes in the world, he would be wise to maintain self-control and a strong heart. The deadly power of cherry is not likely to be tempered by the core of unicorn hair. “

This Wizarding World wand contains Red Oak wood and a Unicorn Hair power core, offering a straight gold handle with classic designs on it. The handle makes way to a dark wood shaft that spirals to the last portion of the handle which transition to a straight design.

The unique lore of this exclusive wand says, “It’s untrue that the red oak staff tends to attract quick-tempered wielders. In fact, red oak wands work best with quick-witted, nimble individuals. When combined with the core of a unicorn’s mane, which is known to be the most resilient, red oak produces a wand that is exceptionally attuned to dueling, and will stay strong through the end.

Wielders of red oak wands are often innovative types who create clever, unique spells. Creative and dexterous witches and wizards also benefit from a consistent and loyal unicorn hair core. They will surely be a force to be reckoned with in battle.”

What do you think of the Wizarding World wands designed to be park specific? Will you try to collect them all? Let us know in the comments below!