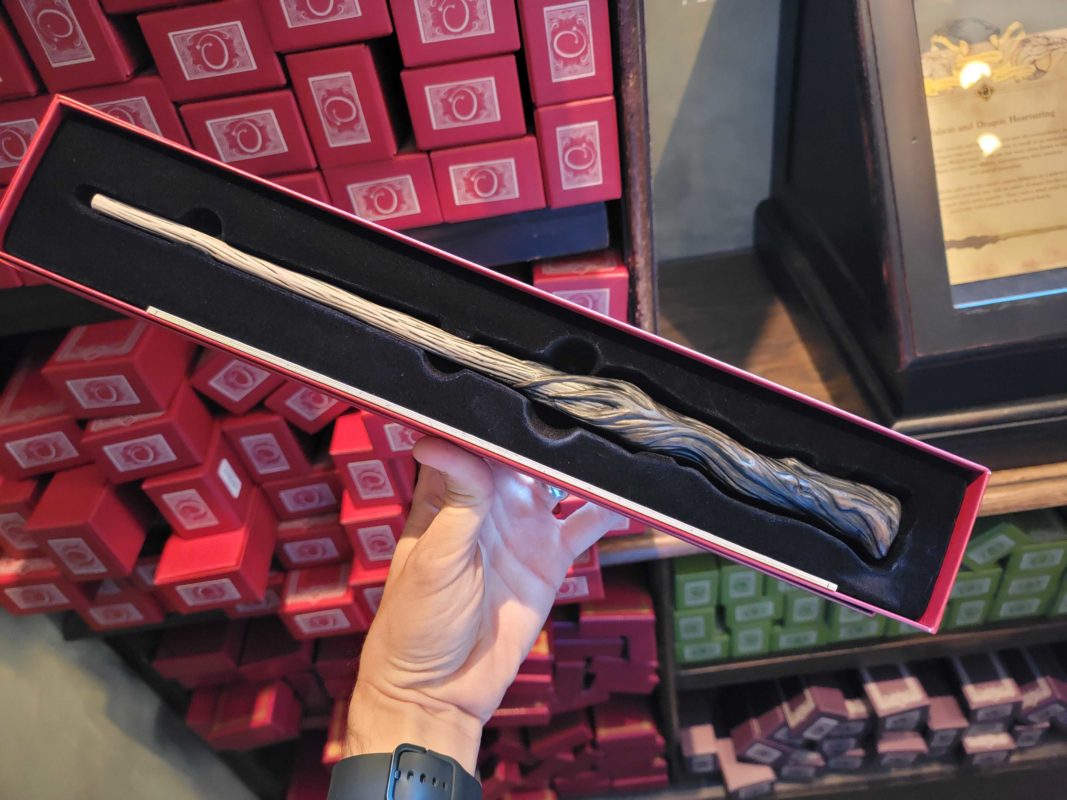 An all-new collection of interactive wands, including a Universal Studios Hollywood exclusive, have arrived at Ollivanders inside the park’s Wizarding World of Harry Potter. Guests visiting any of the four Universal Parks that feature a Wizarding World of Harry Potter area, can now purchase thirteen new and interactive wands as part of this 2022 collection. Each wand pairs a wood type with one of the Wizarding World wand power cores, unicorn hair, dragon heartstring, and phoenix feather. As opposed to the previous series, however, guests are no longer matched to a wand using the Celtic Wood Calendar. 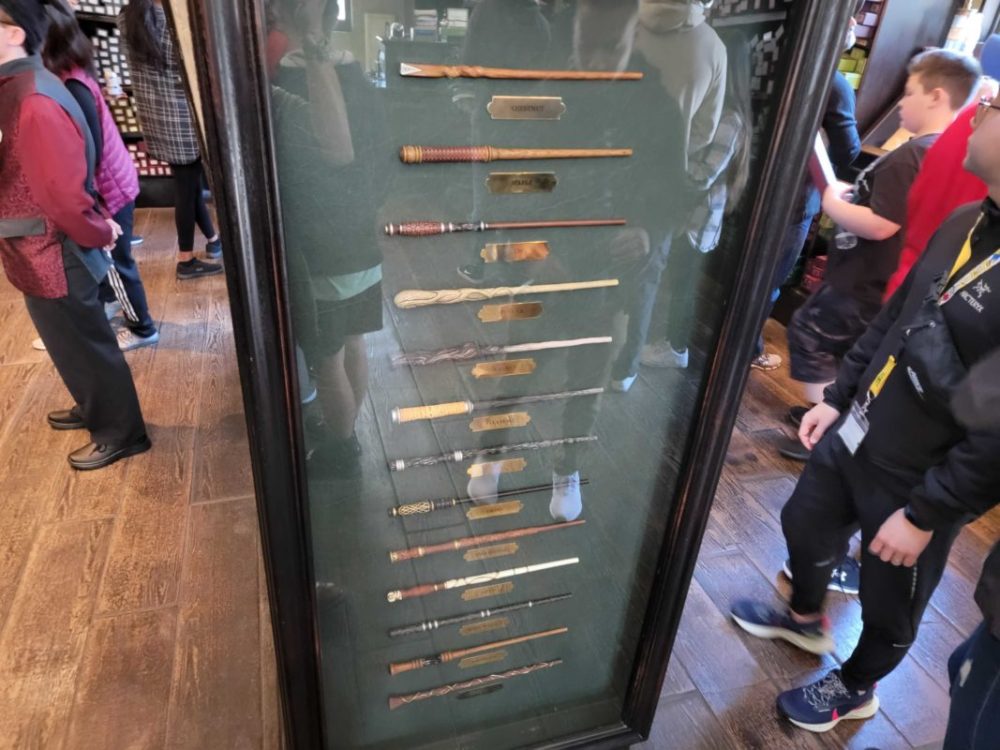 Instead, each wand box contains an exclusive “wand lore” that demonstrates the unique properties of that specific wand. Each wand’s ideal owner can be determined based on the unique personality traits of the witch or wizard and how those traits complement the unique attributes of the wand. While there are thirteen wands in the collection, each of the four Universal Studios Parks that offer a Wizarding World of Harry Potter have their own exclusive wand only available within that park’s dedicated Ollivanders Wand Shop. A Walnut and Dragon Heartstring Wand is available exclusively. for wizards and witches visiting Universal Studios Hollywood. 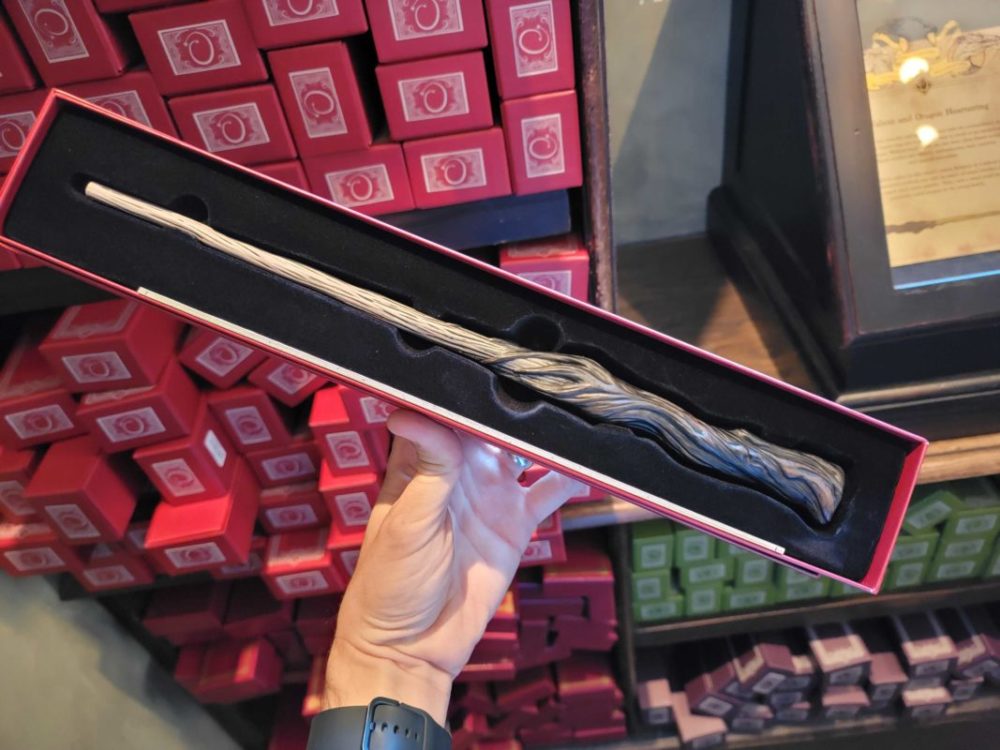 This wand is made of Walnut wood with a Dragon Heartstring core. The wand’s handle also shows a grooved wood design and covers about one-third of the wand. It also curves as if to fit the caster’s hand. The darker colored handle gradually changes to a lighter color. The rest of the wand looks fairly straight with a slight bend. This portion of the wand appears fairly thin overall. 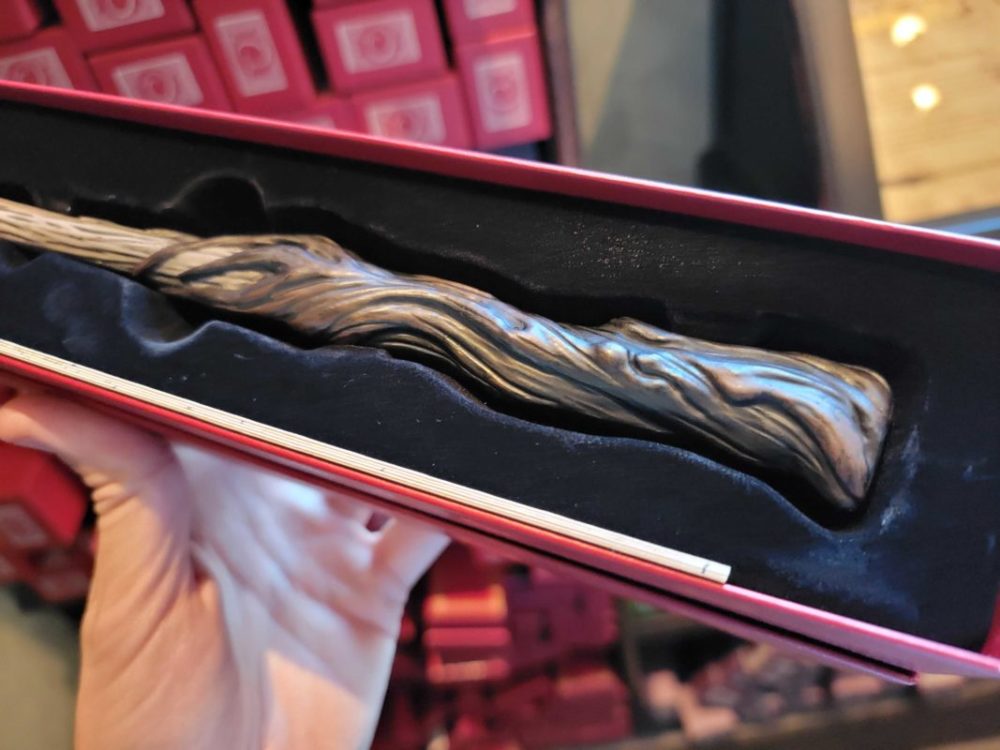 The lore described with this wand reads, “Combining this versatile and adaptable wood with the extraordinary power of a dragon heartstring core is almost certain to result in an exceptionally powerful wand. Walnut wood wants are also most often drawn to highly intelligent witches and wizards, strengthening their creativity and intelligence.” 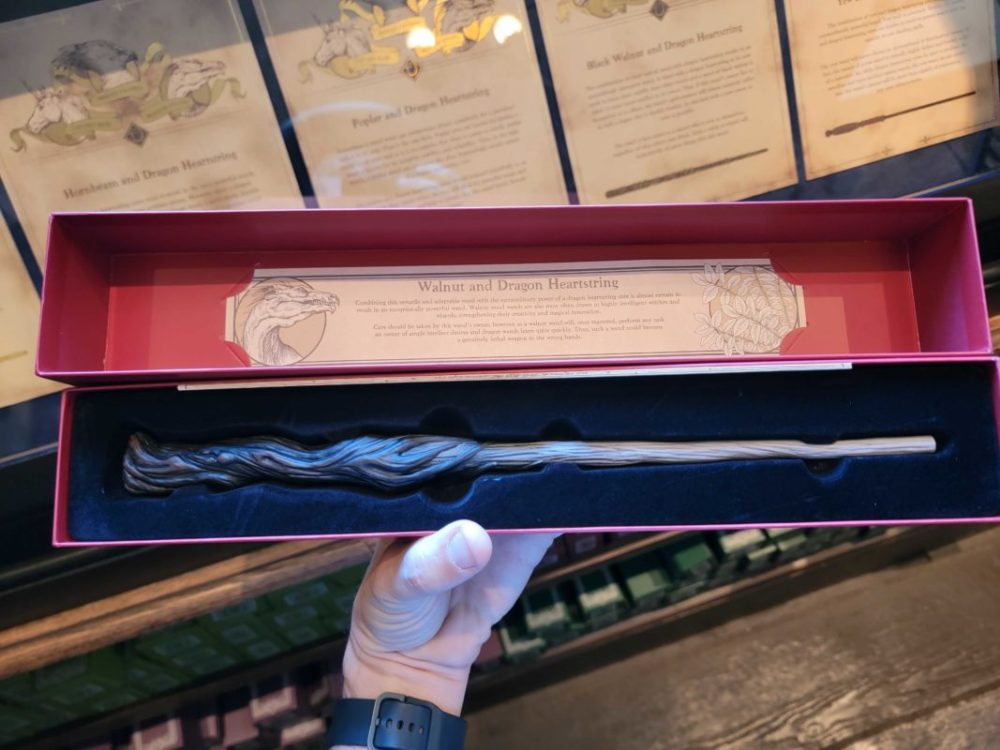 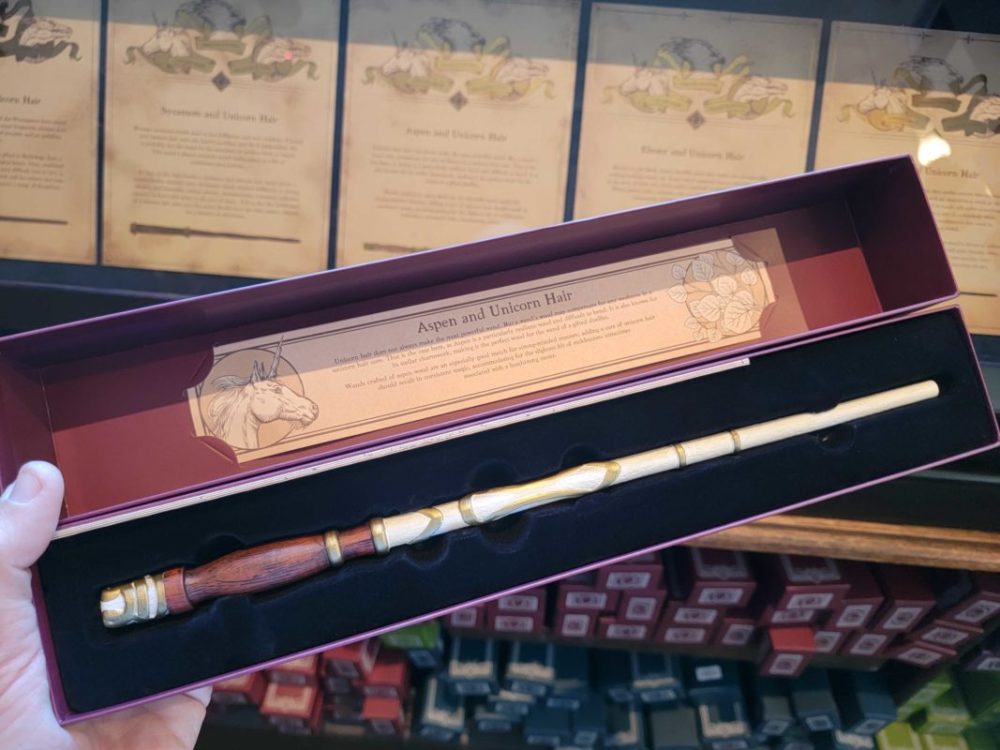 The new Aspen and Unicorn Hair wand has a dark handle contrasting the white base and shaft. Golden accents appear “wrapped” around the white portions of the wand, with two golden rings on the handle. 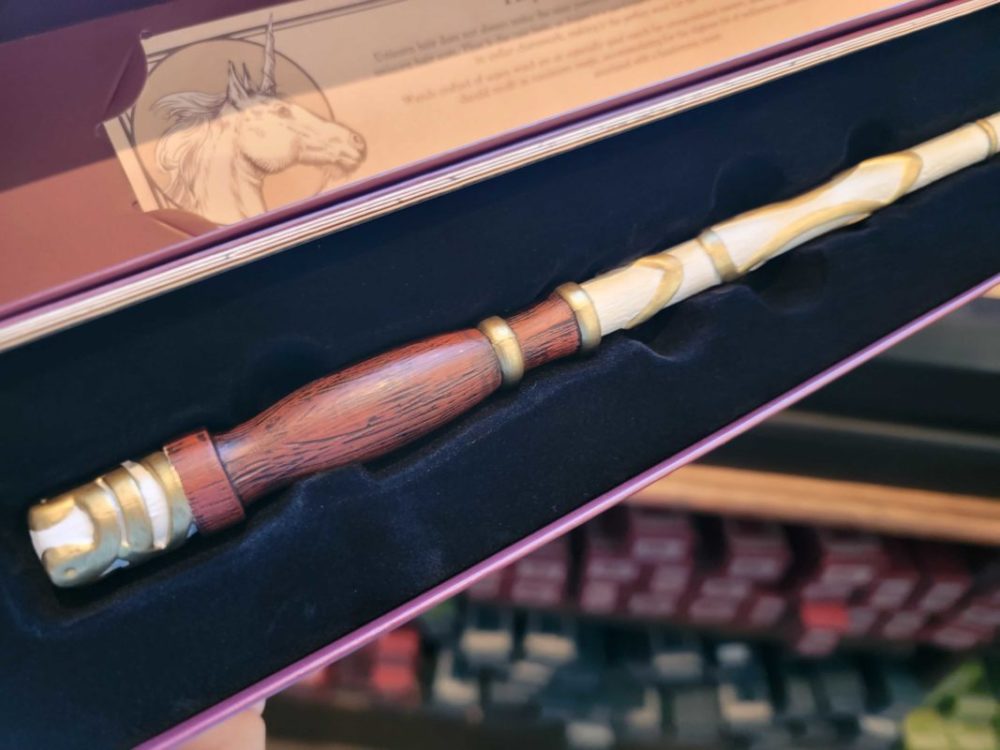 “Unicorn hair does not always make the most powerful wand. But a wand’s wood may compensate for any weakness in a unicorn hair core. That is the case here, as Aspen is a particularly resilient wood and difficult to bend. It is also known for its stellar charmwork, making it the perfect wood for the wand of a gifted duelist. Wands crafted of aspen wood are an especially good match for strong-minded masters; adding a core of unicorn hair should result in consistent magic, accommodating for the slightest bit of recklessness sometimes associated with a headstrong caster.” 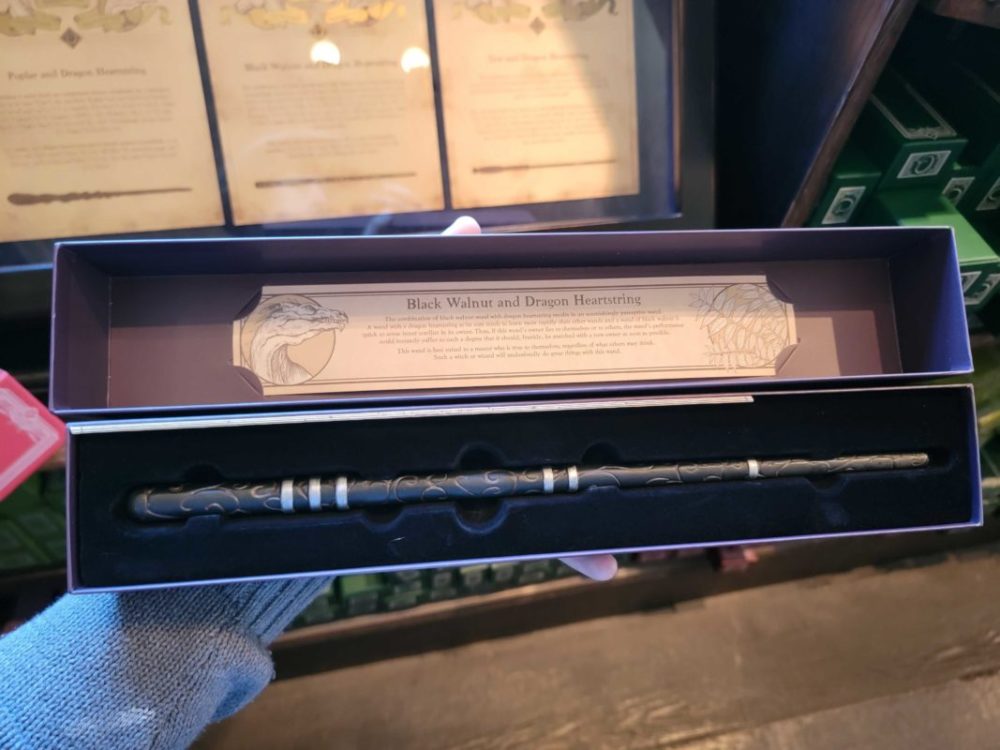 The Black Walnut and Dragon Heartstring wand is also black with swirls carved down the length. Six silver rings are spread across the wand. 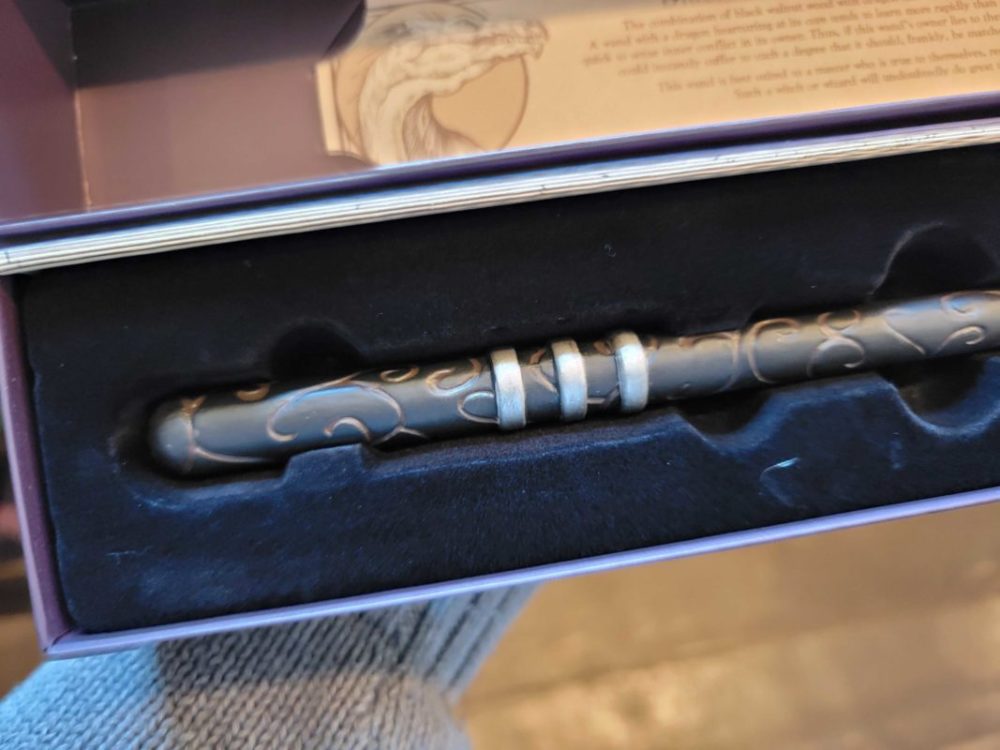 “The combination of black walnut wood with dragon heartstring results in an astonishingly perceptive wand. A wand with a dragon heartstring at its core tends to learn more rapidly than other wands and a wand of black walnut is quick to sense inner conflict in its owner. Thus, if this wand’s owner lies to themselves or to others, the wand’s performance will almost instantly suffer to such a degree that it should, frankly, be matched with a new owner as soon as possible. This wand is best suited to a master who is true to themselves, regardless of what others may think. Such a witch or wizard will undoubtedly do great things with this wand.” 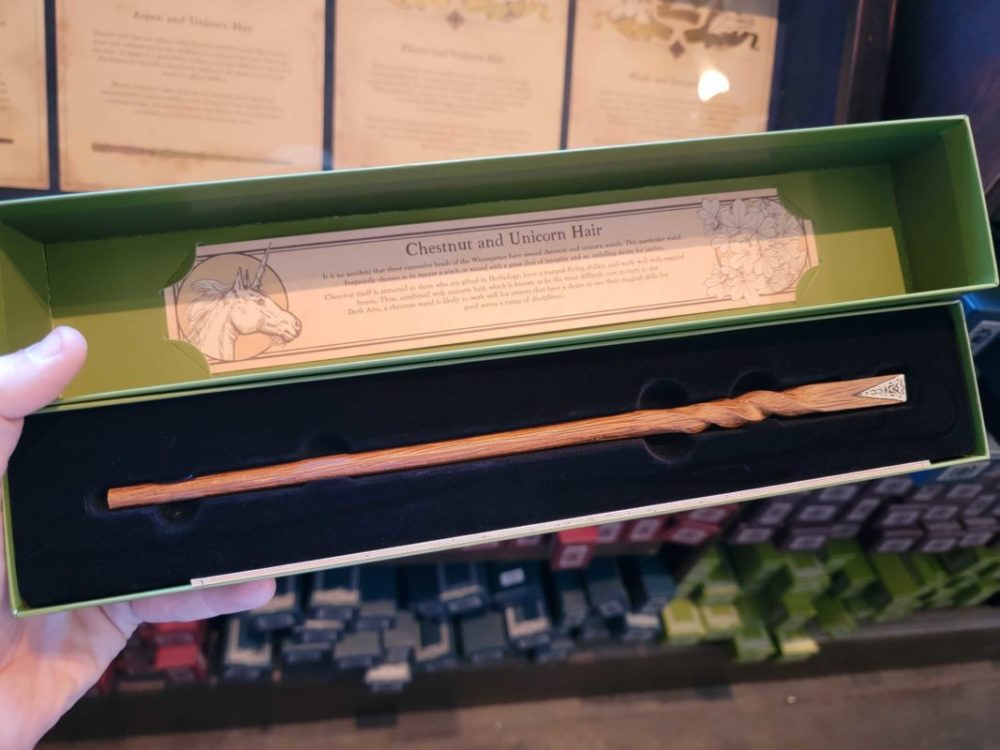 The Chestnut wand has a unique end with a triangular white and black design and a flat, rectangular end. 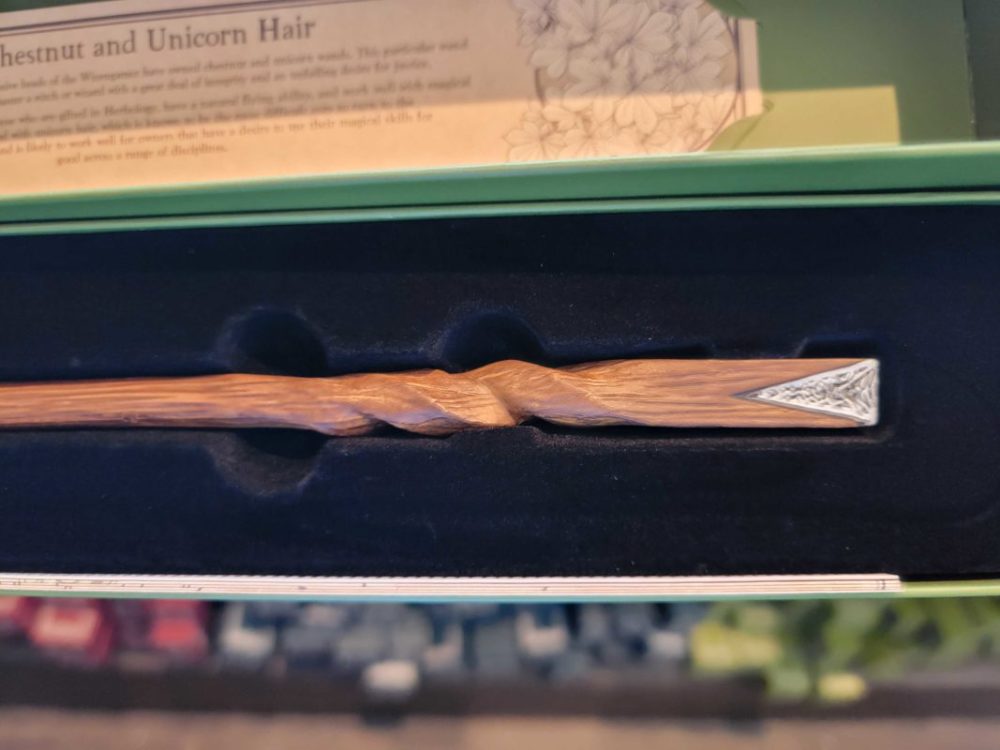 “It is no accident that three successive heads of the Wizengamot have owned chestnut and unicorn wands. This particular wand frequently chooses as its master a witch or wizard with a great deal of integrity and an unfailing desire for justice. Chestnut itself is attracted to those who are gifted in Herbology, have a natural flying ability, and work well with magical beasts. Thus, combined with unicorn hair, which is known to be the most difficult core to turn to the Dark Arts, a chestnut wand is likely to work well for owners that have a desire to use their magical skills for good across a range of disciplines.” 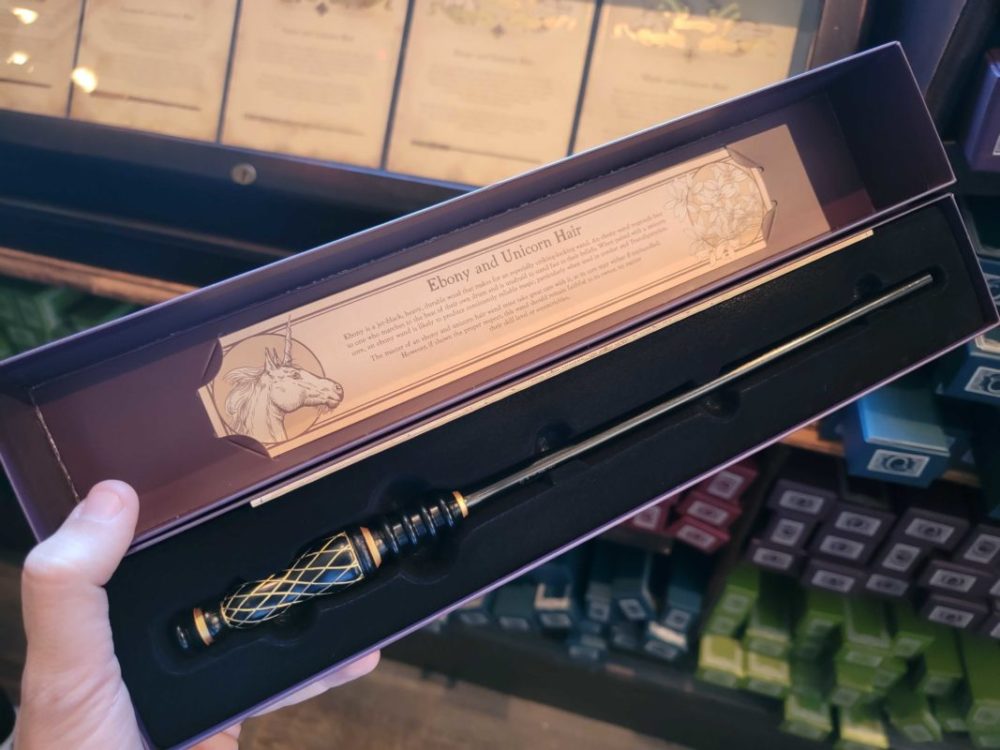 The Ebony wood and Unicorn Hair wand is black with gold detailing. There are three gold rings along the handle and gold crisscrossing in the center. 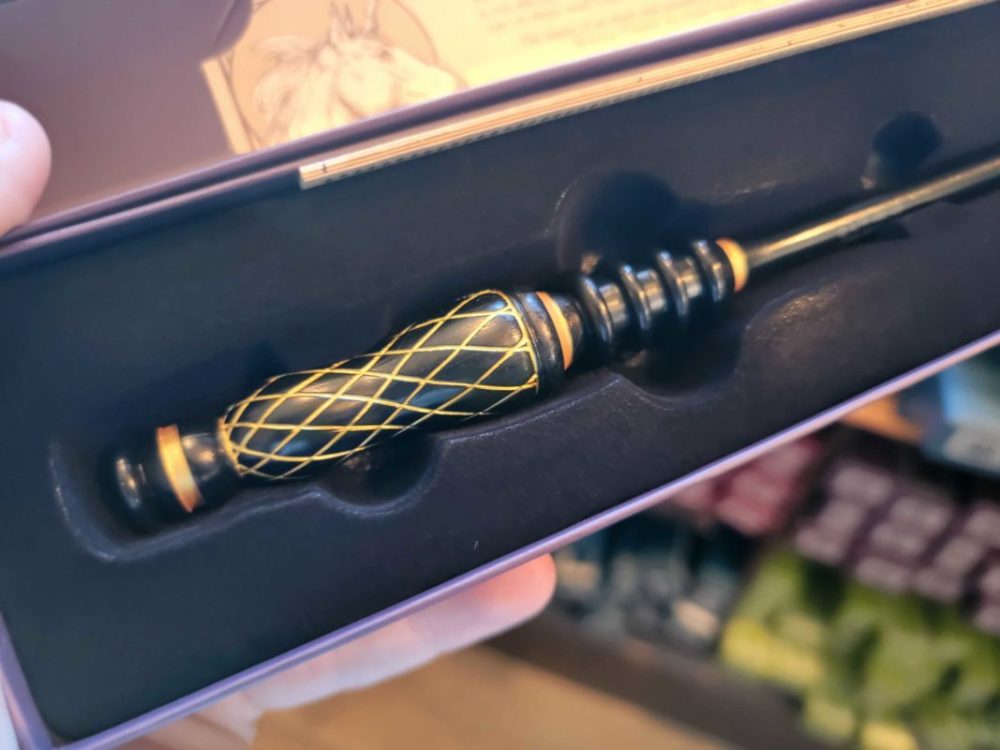 “Ebony is a jet-black, heavy, durable wood that makes for an especially striking-looking wand. An ebony wand responds best to one who marches to the beat of their own drum and is unafraid to stand fast to their beliefs. When paired with a unicorn core, an ebony wand is likely to produce consistently reliable magic, particularly when used in combat and Transfiguration. The master of an ebony and unicorn hair wand must take great care with it, as its core may wither if mishandled. However, if shown the proper respect, this wand should remain faithful to its owner, no matter their skill level or eccentricities.” 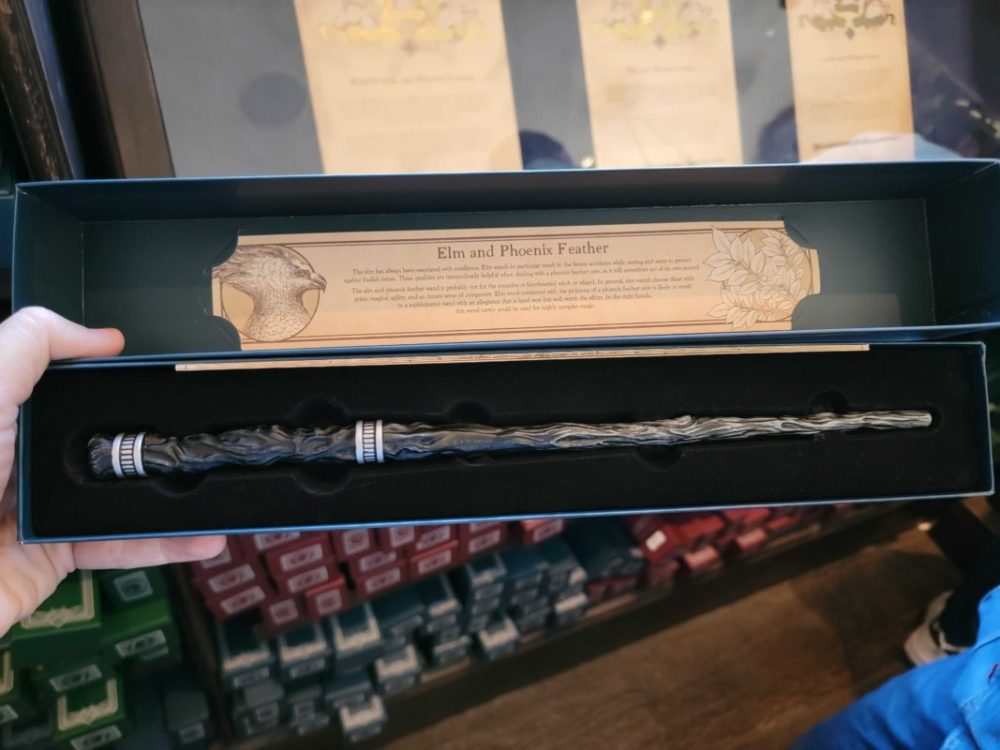 The Elm and Phoenix Feather wand is black with deep striations and grain. Two silver bands are on either end of the handle. 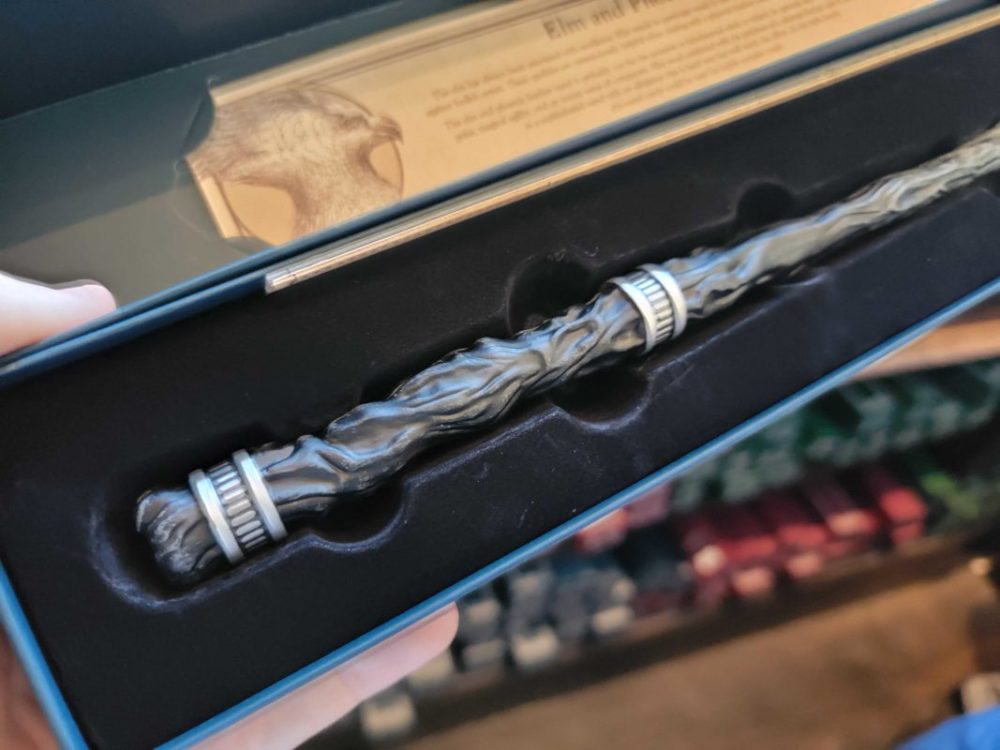 “The elm has always been associated with excellence. Elm wands in particular result in the fewest accidents while casting and seem to protect against foolish errors. These qualities are tremendously helpful when dealing with a phoenix feather core, as it will sometimes act of its own accord. The elm and phoenix feather wand is probably not for the tentative or fainthearted witch or wizard. In general, elm wands choose those with poise, magical agility, and an innate sense of composure. Elm wood combined with the pickiness of a phoenix feather core is likely to result in a sophisticated wand with an allegiance that is hard won but well worth the effort. In the right hands, this wand surely could be used for highly complex magic.” 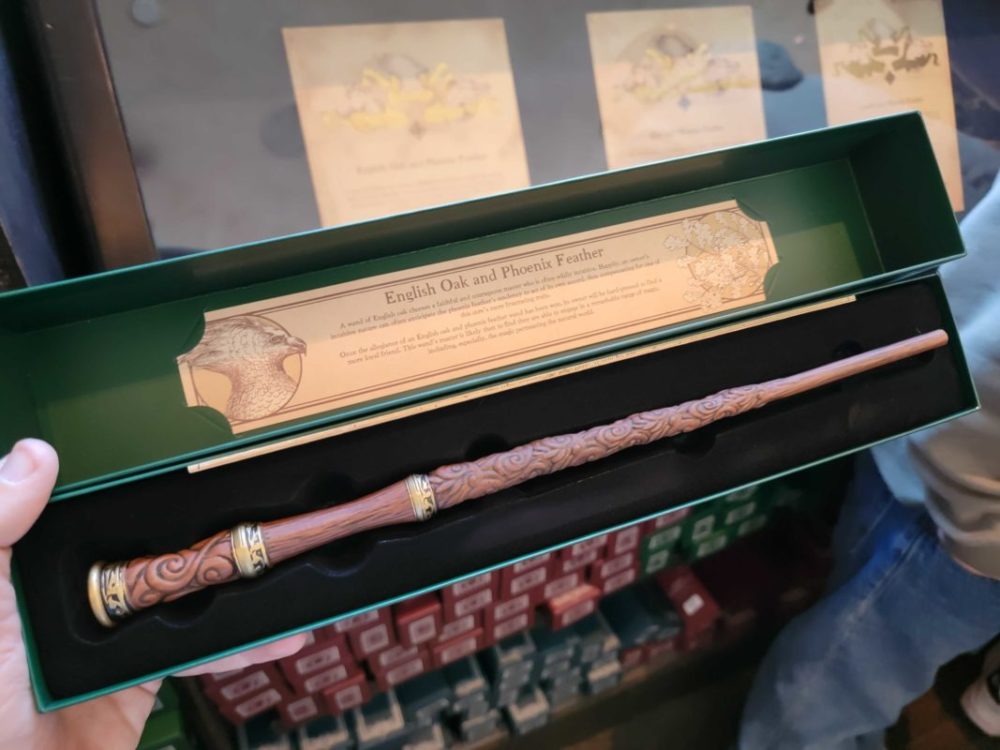 This new wand is crafted from English Oak and Phoenix Feather. It’s reddish-brown with defined wood grain on the handle and top. The base and shaft are covered in carved swirls, and detailed golden bands break up the sections. 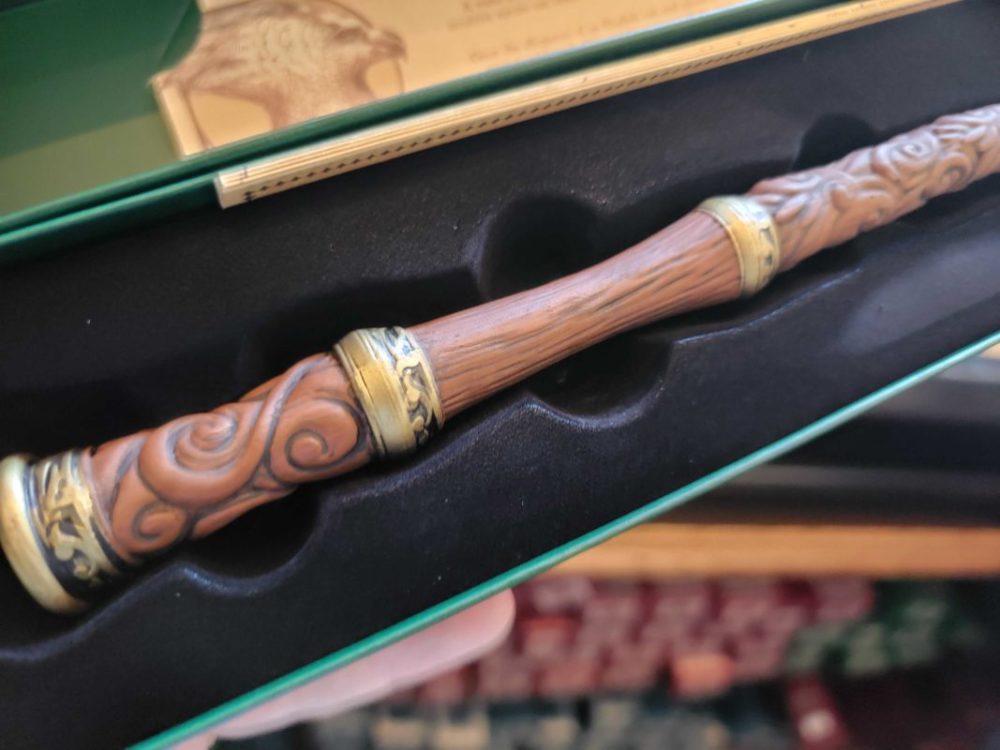 “A wand of English oak chooses a faithful and courageous master who is often wildly intuitive. Happily, an owner’s intuitive nature can often anticipate the phoenix feather’s tendency to act of its own accord, thus compensating for one of this core’s more frustrating traits. Once the allegiance of an English oak and phoenix feather wand has been won, its owner will be hard-pressed to find a more loyal friend. This wand’s master is likely then to find they are able to engage in a remarkable range of magic, including, especially, the magic permeating the natural world.” 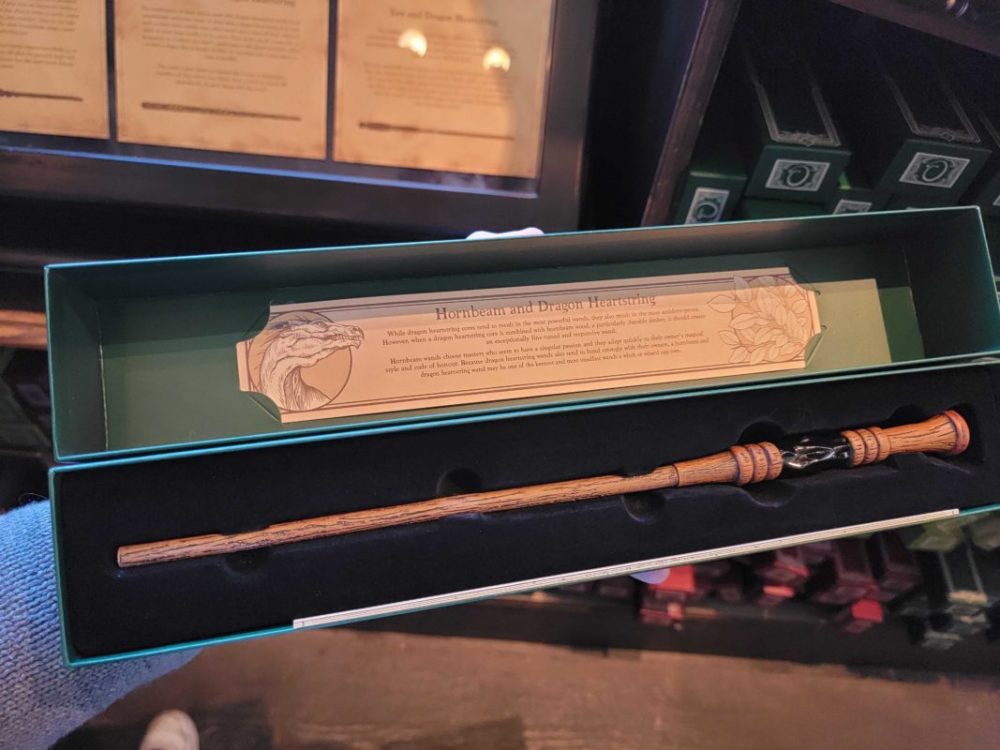 If Hornbeam wood and a Dragon Heartstring core are more your style, this wand is light brown with prominent grain. There’s a black section in the middle of the handle. 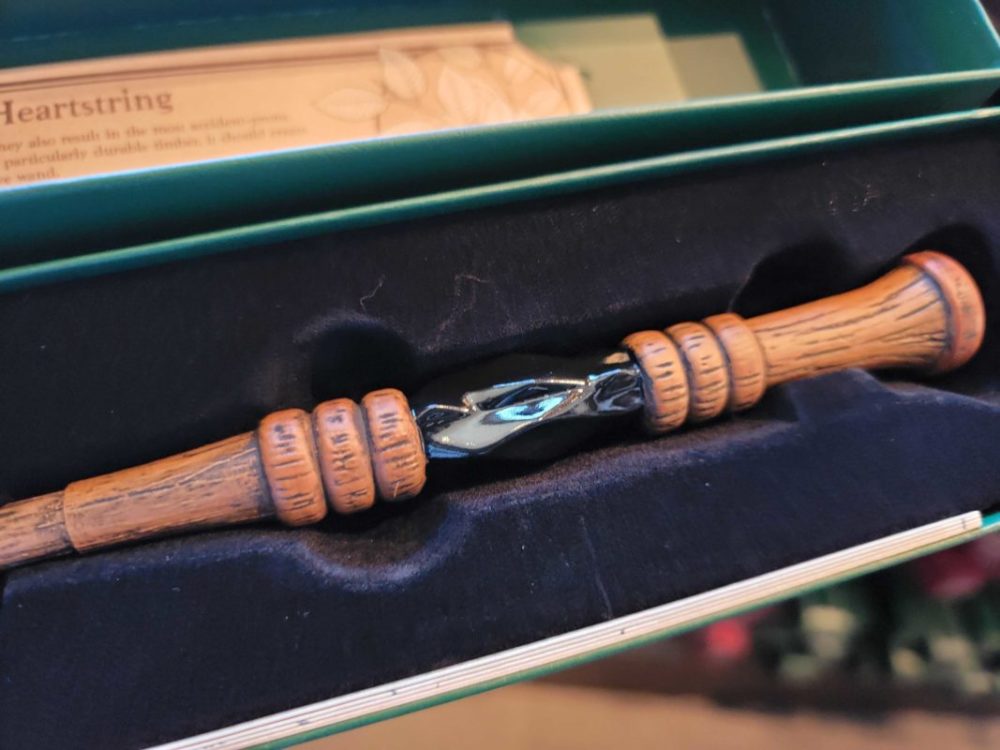 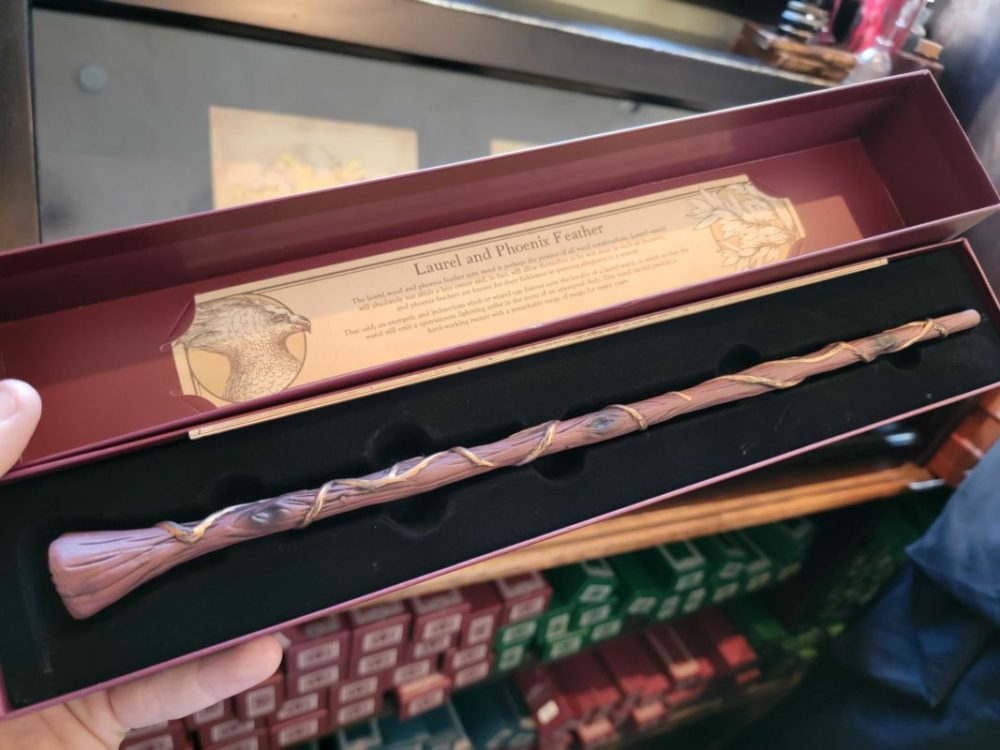 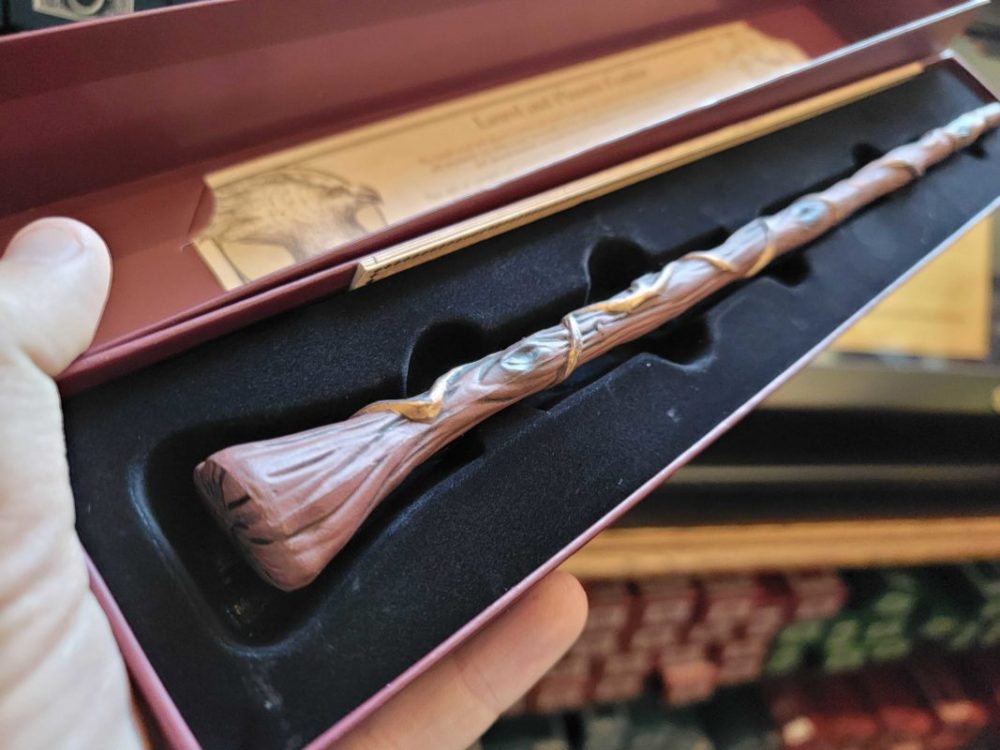 “The laurel wood and phoenix feather core wand is perhaps the pickiest of all wand combinations. Laurel wands will absolutely not abide a lazy owner and, in fact, will allow themselves to be won away in such an instance, and phoenix feathers are known for their fickleness in granting allegiance to a master. That said, an energetic and industrious witch or wizard can forever earn the loyalty of a laurel wand, so much so that the wand will emit a spontaneous lightning strike in the event of an attempted theft. This wand should provide a hard-working master with a remarkable range of magic for many years.” 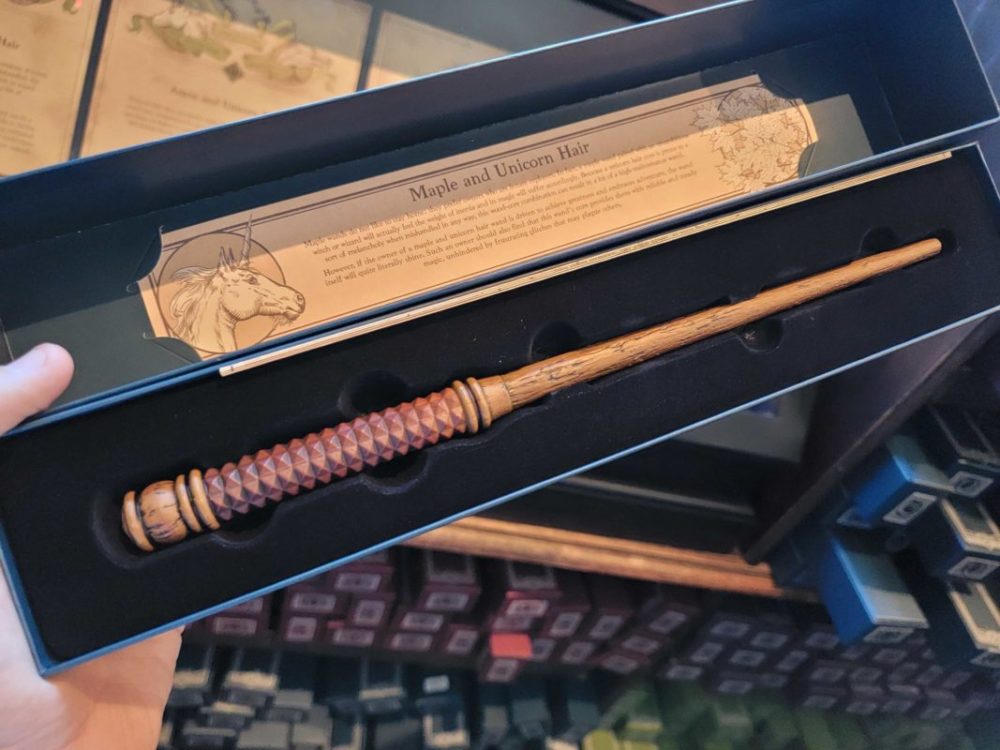 The handle of the Maple and Unicorn Hair wand is carved into rows of tiny pyramids. 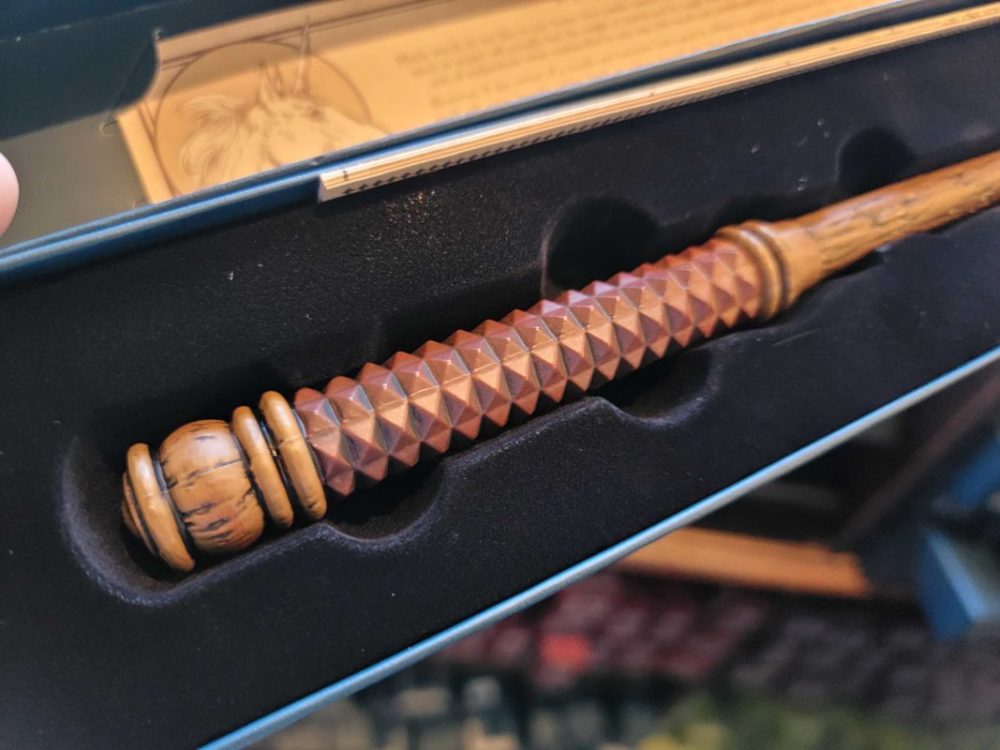 “Maple wands do not like to stay home; they prefer owners who are innate explorers. In fact, a maple wand paired with an unambitious witch or wizard will actually feel the weight of inertia and its magic will suffer accordingly. Because a unicorn hair core is prone to a sort of melancholy when mishandled in any way, this wood-core combination can result in a bit of a high-maintenance wand. However, if the owner of a maple and unicorn hair wand is driven to achieve greatness and embraces adventure, the wand itself will quite literally shine. Such an owner should also find that this wand’s core provides them with reliable and steady magic, unhindered by frustrating glitches that may plague others.” 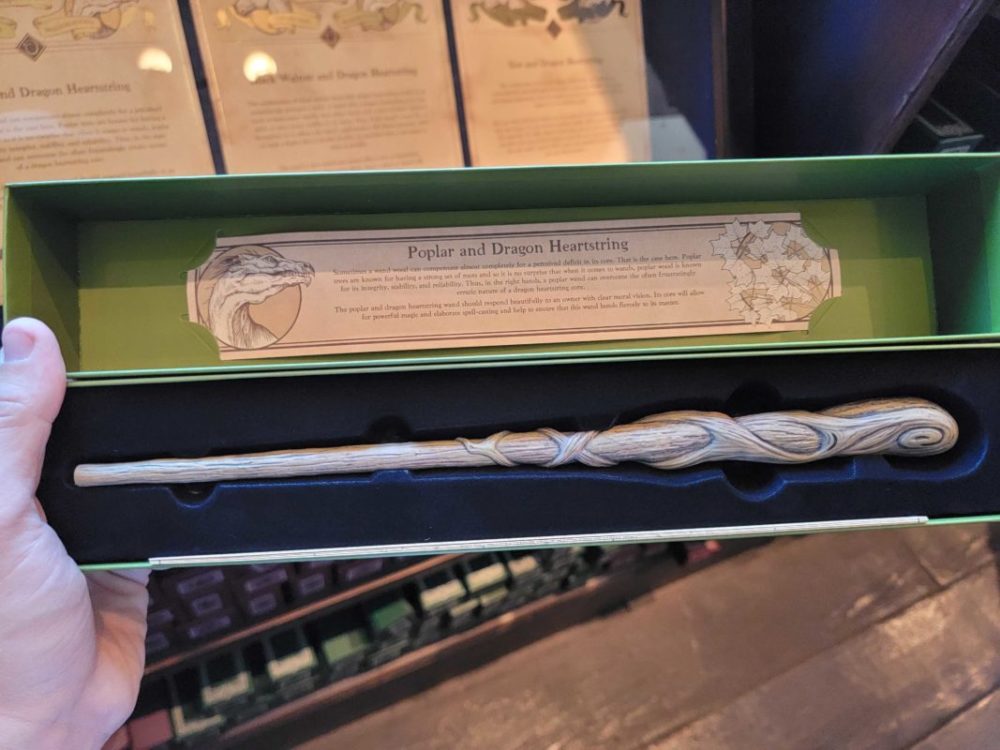 The Poplar and Dragon Heartstring wand is pale with swirls that grow into vines around the handle. 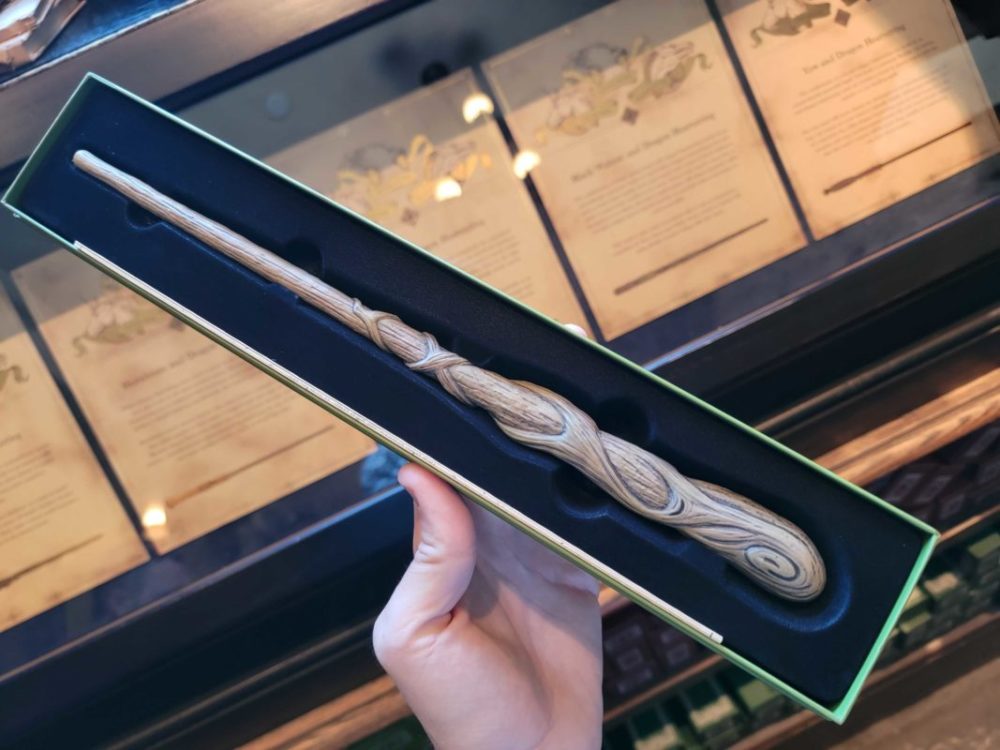 “Sometimes a wand wood can compensate almost completely for a perceived deficit in its core. That is the case here. Poplar trees are known for having a strong set of roots and so it is no surprise that when it comes to wands, poplar wood is known for its integrity, stability, and reliability. Thus, in the right hands, a poplar wand can overcome the often frustratingly erratic nature of a dragon heartstring core. The poplar and dragon heartstring wand should respond beautifully to an owner with clear moral vision. Its core will allow for powerful magic and elaborate spell-casting and help to ensure that this wand bonds fiercely to its master.” 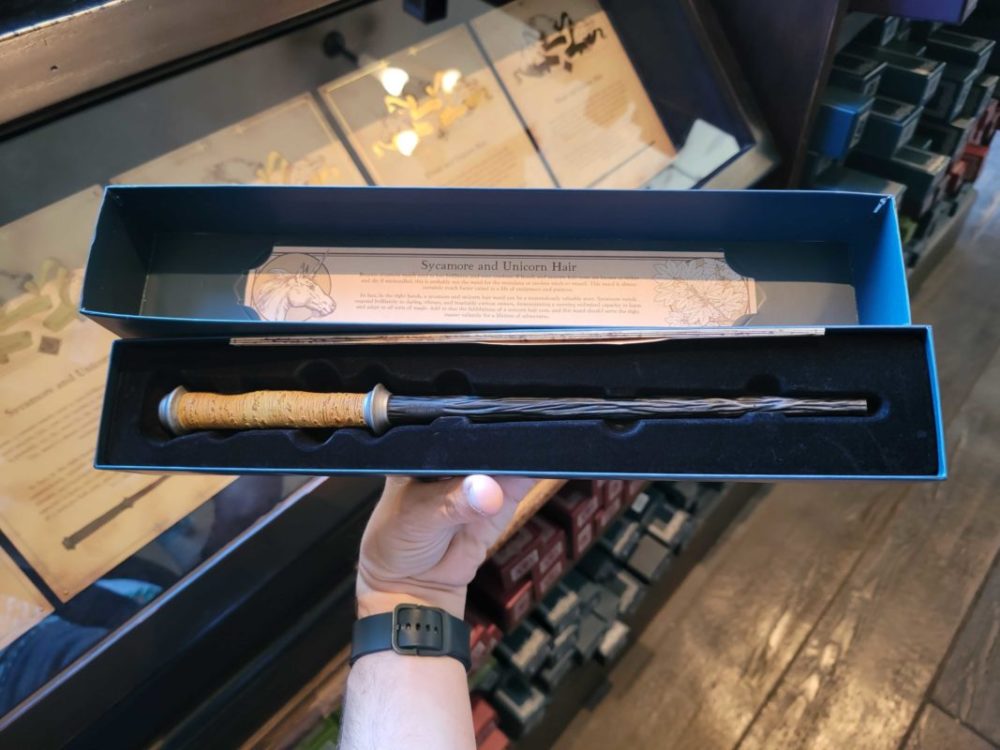 The Sycamore and Unicorn Hair wand is a deep brown with heavy striations. The handle appears to be covered with unpainted sycamore. 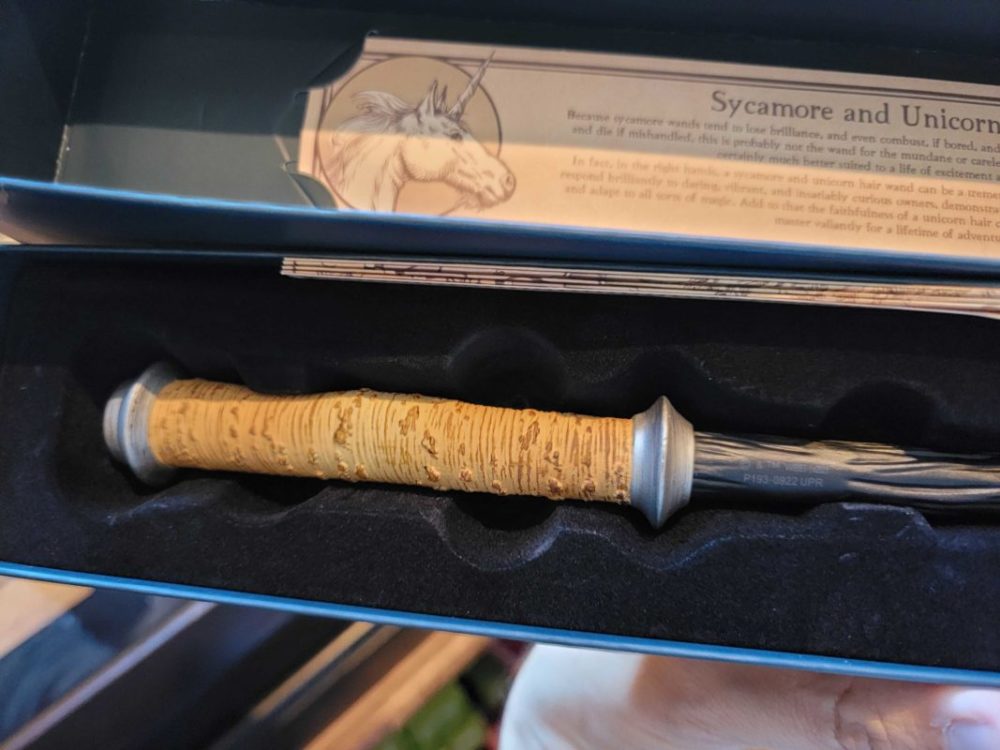 “Because sycamore wands tend to lose brilliance, and even combust, if bored, and unicorn hair cores are known to wither and die if mishandled, this is probably not the wand for the mundane or careless witch or wizard. This wand is almost certainly much better suited to a life of excitement and purpose. In fact, in the right hands, a sycamore and unicorn hair wand can be a tremendously valuable asset. Sycamore wands respond brilliantly to daring, vibrant, and insatiably curious owners, demonstrating a seemingly unlimited capacity to learn and adapt to all sorts of magic. Add to that the faithfulness of a unicorn hair core, and this wand should serve the right master valiantly for a lifetime of adventures.” 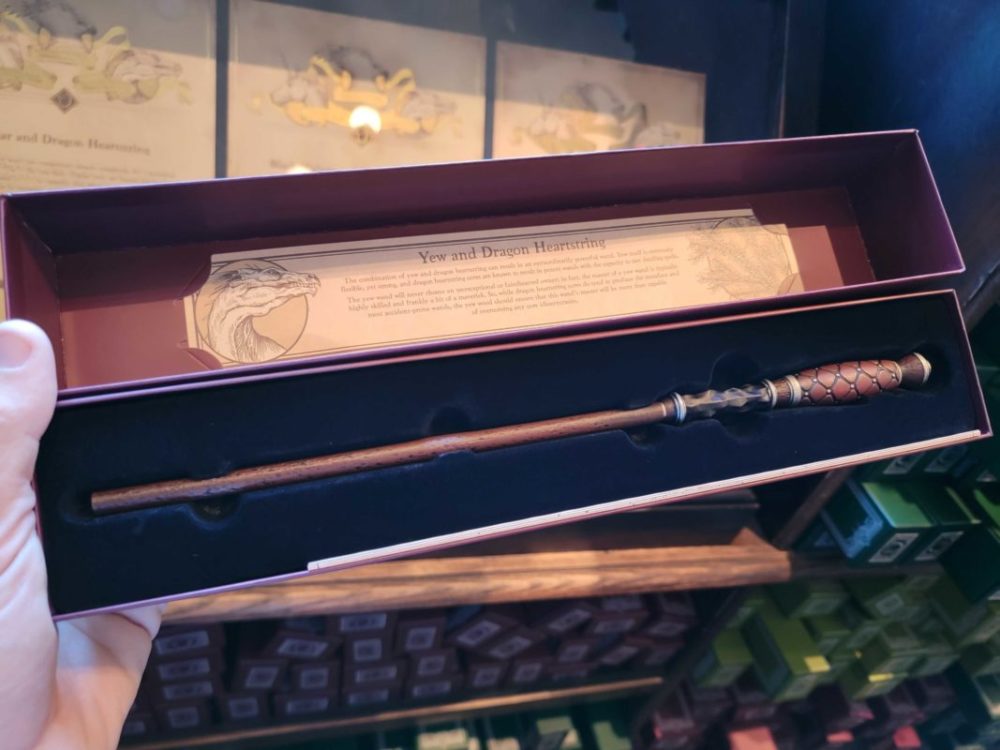 The Yew and Dragon Heartstring wand is another unique design with several wood tones, silver details, and a patterned handle with small silver accents. Between the handle and the shaft of the wand is a bumpy black section. 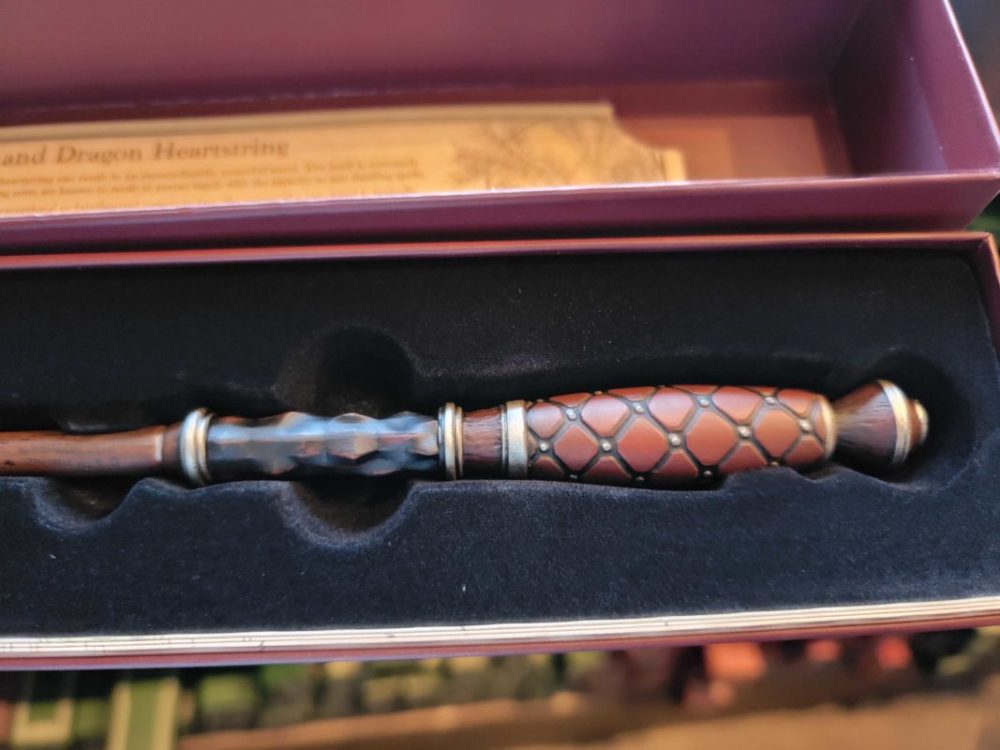 “The combination of yew and dragon heartstring can result in an extraordinarily powerful wand. Yew itself is extremely flexible, yet strong, and dragon heartstring cores are known to result in potent wands with the capacity to cast dazzling spells. The yew wand will never choose an unexceptional or fainthearted owner; in fact, the master of a yew wand is typically highly skilled and frankly a bit of a maverick. So, while dragon heartstring cores do tend to produce the moodiest and most accident-prone wands, the yew wood should ensure that this wand’s master will be more than capable of overcoming any core idiosyncrasies.”

Will you be picking up the exclusive Universal Studios Hollywood Walnut and Dragon Heartstring Wand or does another wand draw more on your personality? Perhaps, the Universal Studios Orlando exclusive Larch and Phoenix Feather Wand is more fitting for the witch or wizard in your life. For a look at each of the four wands exclusive to its respective Universal Park, check out our full run-down here.