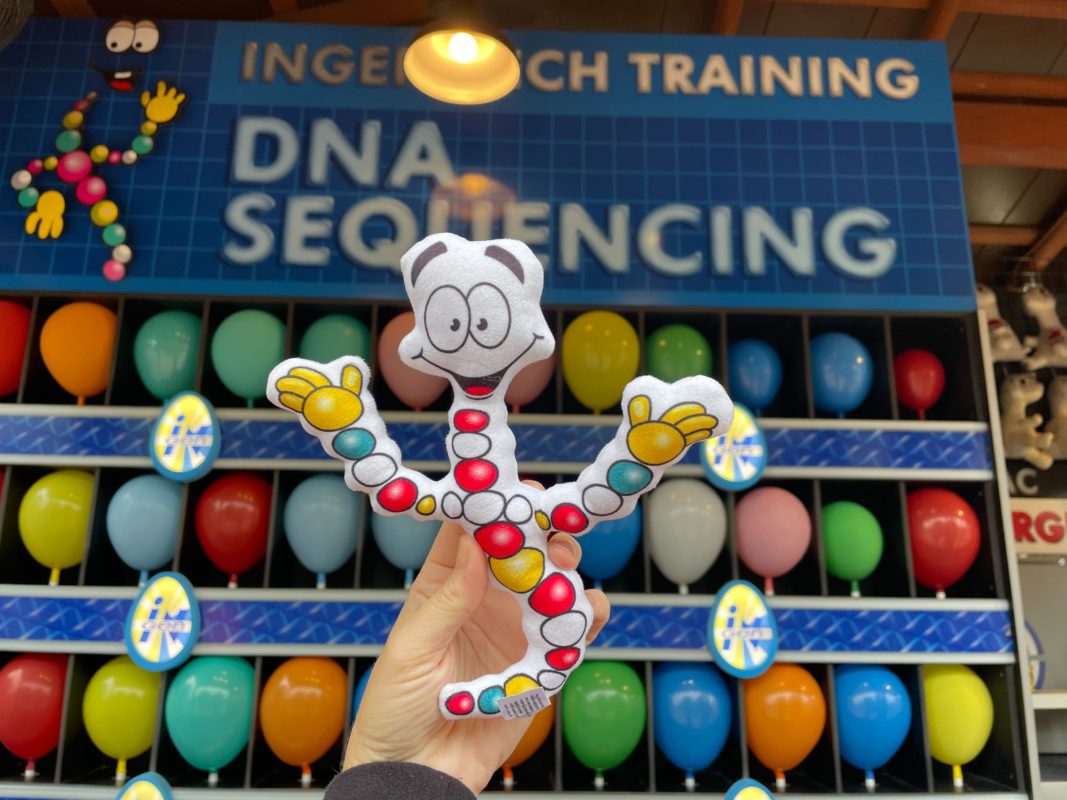 Greetings from the Universal Orlando Resort during one of the busiest times of the year! The holidays are right around the corner, along with the crowds. It’s a chilly day, but we’re ready to hit the parks and see what’s new today.

As soon as we arrived in CityWalk, we noticed some more changes to where the old “Welcome to Universal Orlando Resort” sign used to be. There are small squares covering up the holes from the previous sign, but it almost looks like there is an outline for a potential new sign. We hope it returns!

Inside the Universal Studios Store in CityWalk, we spotted a brand new Earl the Squirrel bag. It looks a bit like a lunch bag or cooler bag, with backpack straps and handles that snap. We also spotted this in the Tribute Store and a few other locations around the park.

There’s a new Loungefly backpack that matches the Gremlins wallet we found a while back. The 3D glasses are attached with snaps and can be easily removed, depending on your mood. We found this in the 5 & 10 for $85.

Every day really is Halloween at Universal Studios. Some Halloween Horror Nights ID holders are available in the 5 & 10 for 70% off. Grab them before they’re gone!

In addition to the blankets, this water bottle is also available at a discounted price with a $40 purchase. It’s $17 with a $40 purchase, or can be bought alone for $35. There’s a small storage space on the water bottle which is perfect for keeping park tickets, money, and other small items. This would be a great investment. It even has a carrying strap.

There are a few new changes to the Villain-Con Minion Blast attraction. We can see lights inside the queue and now along the exterior of the building near the entrance.

The Kitty Kat Club sign was peeling in the corner recently, but it’s been fixed. It looks great!

The Express sign has been uncovered at the entrance of Revenge of the Mummy! We didn’t see any “Technical Rehearsal” signs, so it appears to be officially open finally.

The Grinch Mold-A-Rama machine in the Tribute Store is out of order. We still need to get one for our collection before the end of the holidays, so hopefully it returns.

Over at Islands of Adventure, we stopped into the All Hallows Krampus Boutique and found some holiday coffees. These are $21 each and would make a great gift for a coffee lover. The flavors available were Santa’s Banana Blend, Holiday Merry Mint, Season’s Strudel, and Buttered Rum Holitoddy.

Hagrid’s Magical Creatures Motorbike Adventure had a 140 minute wait just before noon and there was a very long line to get into the Three Broomsticks in Hogsmeade.

The Wizarding World was packed, but the rest of the park was relatively quiet. The cold weather might have been keeping people away.

Bingo! Dino DNA! Over at the DNA sequencing skill game in Jurassic Park, a new Mr. DNA plush prize is now available. We couldn’t leave without winning him. You need to pop 2 balloons to win him and you get 3 chances.

Dudley Do-Right’s Ripsaw Falls has reopened after refurbishment. It’s a cold day, so there’s only a 5 minute wait.

That duck can’t read the signs.

There’s more refurbishment happening around Toon Lagoon. Some of the characters have returned, but now a few of the tables are missing from Blondie’s. This area has been getting a lot of refurbishment and everything has looked really good so far.

Some places feel crowded, but the park isn’t packed. We’re curious to see how busy the rest of the week is!

We spotted a few holiday snacks we missed! At the Coca-Cola Refreshment cart in CityWalk, you can find a Cup o’ Churros or Arroz con Dulce Empanadas. We will have to try these before they’re gone.

Thanks for joining us around the Universal Orlando Resort today. We’ll be back again soon to brave the holiday crowds and the Florida cold, so stay tuned. You can also watch a vlog of our day at Universal Orlando in the video below.