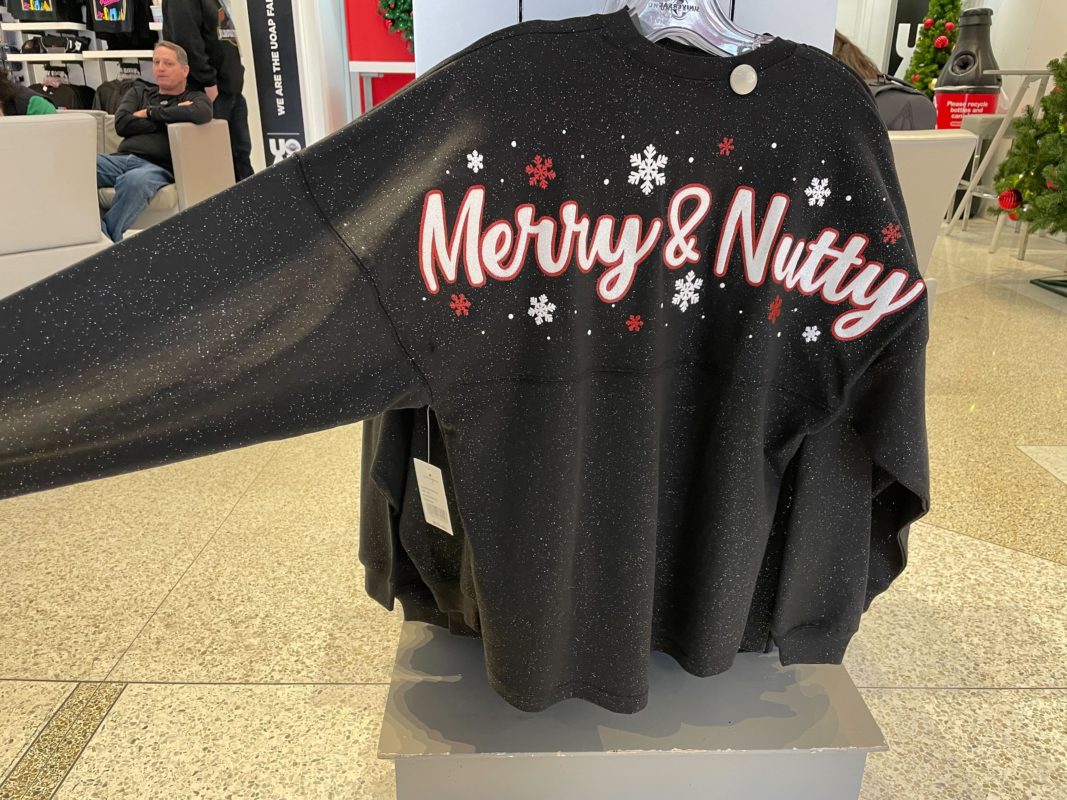 Even two days before Christmas, we’re still catching some new holiday merchandise on its way into Universal Orlando Resort! Today, our searches yielded a brand-new version of the “Merry & Nutty” Earl the Squirrel Spirit Jersey, similar to the one we found last month but with some key differences!

This shimmering new Spirit Jersey is all black and covered with sparkles, similar to the Men in Black: Alien Attack Spirit Jersey we found earlier this month. Much like the other Earl the Squirrel Spirit Jersey, the central squirrel occupies the left-hand breast in a wreath which reads “Universal Studios.”

We found this at both the UOAP Lounge and the Port of Entry Christmas Shoppe, although being a passholder is not required for purchase.

The back side has the same “Merry & Nutty” wording with red and white snowflakes around. But instead of the fun ugly Christmas sweater pattern on the sleeves and lower half, the jersey is just sparkling black all over, a more minimalist take.

For those who are not familiar with Earl the Squirrel, he was inspired by a real-life squirrel who, one year, was discovered by workers when it decided to make its home in the park’s main Christmas tree.

As the story goes, when workers were putting up the tree when all of a sudden, they noticed a string of lights go out. Upon inspection, they noticed the wire had been chewed, and they eventually discovered the squirrel culprit.

Universal decided to incorporate this intrepid squirrel into the tree (and now he has his own line of merchandise. When you visit the park, carefully look at the park’s largest Christmas tree and see if you can spot Earl (an electronic version) hiding in the tree.

Will you be adding this more minimalist Earl the Squirrel Spirit Jersey to your holiday wardrobe for next year? Let us know in the comments below!