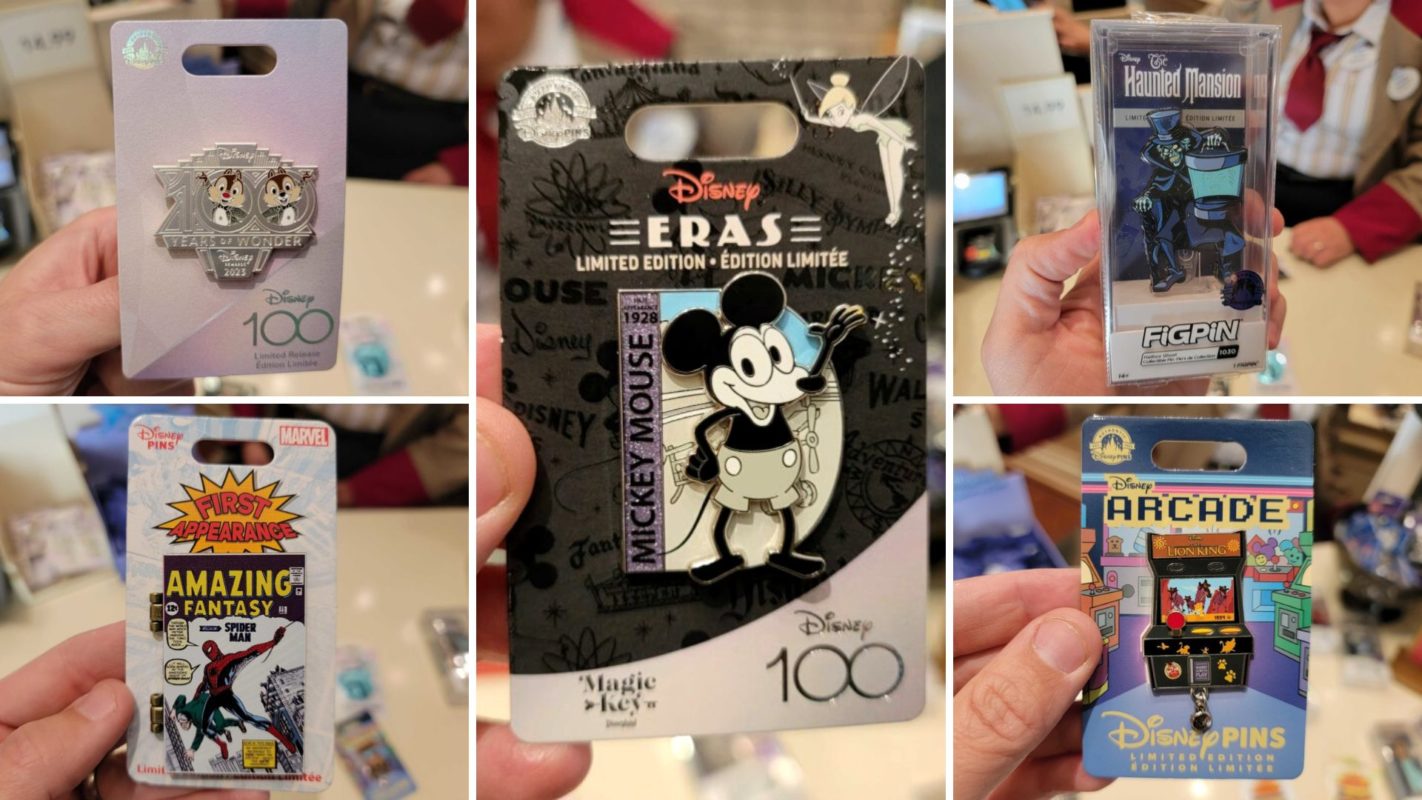 Several new pins have arrived at Disneyland Resort this week, including the first item of Disney100: The Eras Collection. These pins are all available at 20th Century Music Co. in Disneyland Park.

This pin features Mickey in black and white. A plane is visible in the background, solidly placing this version of Mickey in “Plane Crazy.” “Plane Crazy” was actually the first Mickey short film produced, but “Steamboat Willie” premiered first. The side of the pin has a sparkling purple stripe with “Mickey Mouse First Appearance 1928” printed in black lettering.

The backing card has the Disney100 and Magic Key logos on a silver stripe along the bottom, and Tinker Bell at the top. The rest of it is patterned with images of Mickey, Walt’s face, and different land icons (like the Tomorrowland atom and King Arthur Carrousel).

This pin is part of a new series of Disney Arcade pins. It resembles a classic arcade game inspired by “The Lion King.” It has a limited edition size of 4,000.

Last year, we celebrated 60 years of Spider-Man. This pin resembles “Amazing Fantasy” #15, the 1962 comic he first appeared in.

It opens to reveal another Spider-Man comic panel. It has a limited edition size of 2,000.

This matching pin honors the first appearance of the Green Goblin in “Amazing Spider-Man” #14 in 1964.

The first pin in the Disney Metal Magic pin features the silhouettes of Jasmine and her tiger Rajah. They are in dark blue against a shiny blue background depicting the garden of Agrabah. It has a limited edition size of 2,500.

This art deco pin is exclusively for Disney Visa cardholders. It depicts Chip and Dale in silvery tuxedos peeking out of the zeroes in “100 Years of Wonder.”

“Disney Rewards 2023” is at the bottom and it comes on a light purple Disney100 backing card.

FiGPiN has several new character pins. These large pins include plastic display stands. First up is the famous Hatbox Ghost from the Haunted Mansion. His disappearing face even seems to glow in his hatbox.

The next pin is Jasmine in her classic teal outfit.

Peg-leg Pete is pictured in black and white, glaring at something unseen.

He pairs well with this black and white Mickey pin, who seems to be laughing at Pete.

Which new pin will you add to your collection? Let us know in the comments.