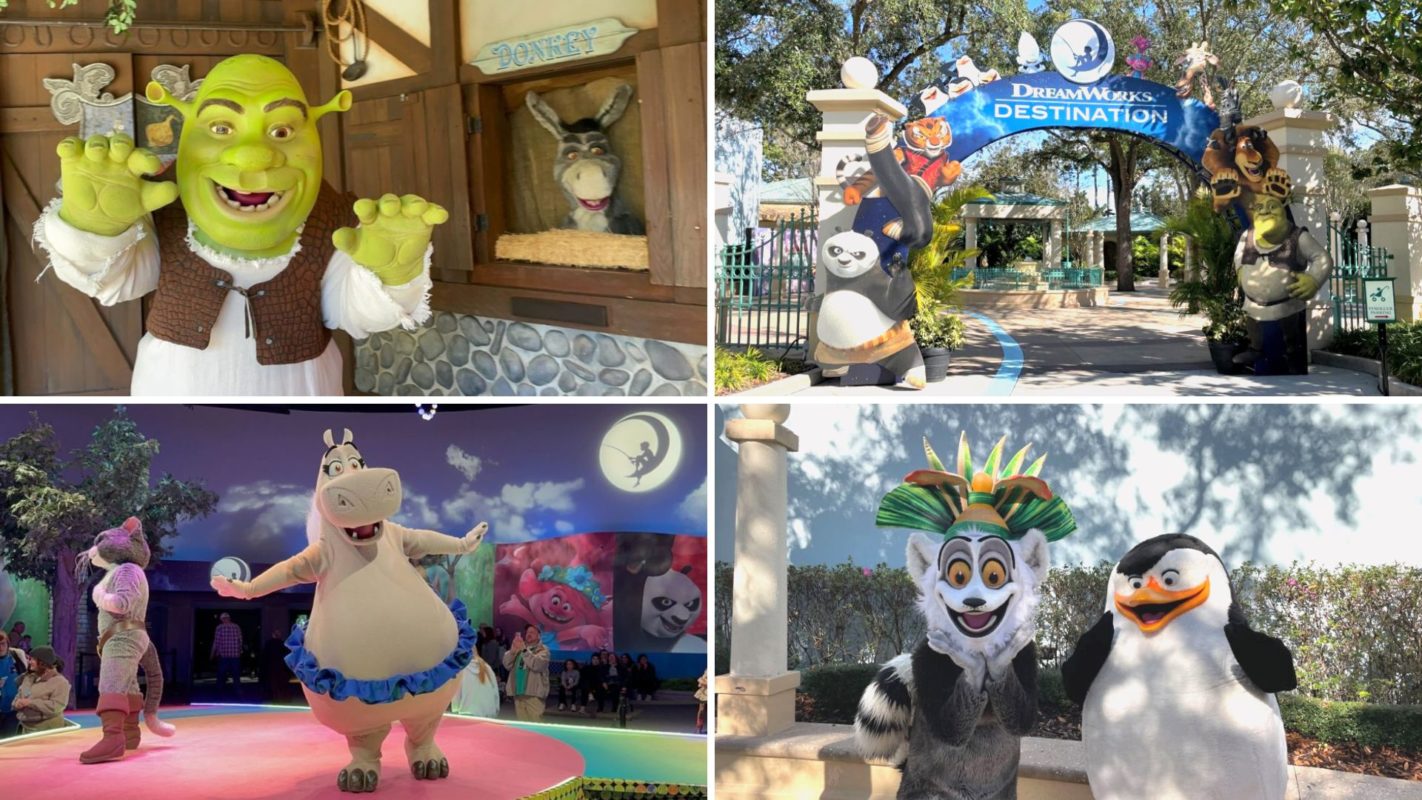 Woody Woodpecker’s KidZone, as we knew it, is gone with the closure of most attractions and areas. As we look ahead to the future replacement, we’re taking a look back at the short-lived DreamWorks Destination and Meet Shrek & Donkey location.

The Shrek & Donkey (and sometimes Fiona) meet and greet was originally located adjoining Universal Studios’ Classic Monsters Café. When the café was abruptly shuttered last year, it was announced that Shrek and Donkey would be finding a new home.

DreamWorks Destination had taken over the former A Day in the Park With Barney show, leaving the Barney gift shop bereft. Soon after the Production Central location closed, Shrek and Donkey moved into the former shop.

While not part of KidZone, Shrek 4-D also closed last year to make way for Villain-Con: Minion Blast. The old meet and greet location was destroyed for Minion Café and the rest of Illumination Avenue.

Watch our video saying goodbye to Shrek and Donkey below, and keep scrolling for a detailed photo tour.

Part of the queue was outside the building.

Inside, Universal utilized the pre-existing tree leftover from the Barney store. Extra swampy plants were added to the wall behind the crate-shaped kiosk where guests could purchase their photos.

A wanted poster for Shrek was hung over an opening in the tree that was used to display merchandise. To one side was a door with a crescent moon on it, like Shrek’s outhouse. A double door on the other side featured a Shrek-themed coat of arms.

There was also a Shrek tapestry that could be pulled across the double doors.

Donkey peeked out of barn doors in the wall, beneath a sign with his name on it.

Shrek and Fiona would stand in front of Donkey’s doors.

When Donkey wasn’t appearing, the barn doors could close.

DreamWorks Destination opened in May 2021.

It existed for over a year with relatively temporary-looking set pieces, like this archway.

An A-frame sign with showtimes was sometimes posted outside the archway.

The archway featured characters from “Kung Fu Panda,” “Madagascar,” “Trolls,” and “Shrek.” The DreamWorks moon logo was at the top.

Stroller parking was to the side of DreamWorks Destination.

Temporary backdrops were up around the courtyard and frequently changed for new releases. Sometimes characters would meet in front of the backdrops.

Photo Ops & Meet and Greets Outside

Gabby from Gabby’s Dollhouse joined the courtyard meet-and-greets in late 2021.

Characters from “Madagascar” and “Trolls” would meet without backdrops.

Team Members would sometimes be in the courtyard with hula-hoops to play with kids.

Other recent backdrops were for “The Bad Guys” and “Puss in Boots: The Last Wish.”

Puss in Boots made appearances in front of his backdrop.

The dance party was inside. These doors were no longer in use.

The covered queue had blue curtains and flat panel displays.

Colorful stars were projected onto the floor.

This area was previously the Barney pre-show area.

The queue space was mostly unnecessary for the dance party, which guests could walk in and out of at any time.

Some of the rocks sparkled, a leftover effect from A Day in the Park With Barney.

The doors to the theater closed only when it reached capacity.

Aside from the addition of DreamWorks characters, not much changed inside the building.

There were simple park benches all around the theater.

There were also fake plants in stone planters.

Flats of the DreamWorks logo and characters were added to the house façade inside.

The DreamWorks logo was also above the entrance/exit.

Team Members worked to manage traffic and hype up the crowd. A host asked DreamWorks trivia questions; kids shouted out the answers.

They led the characters and guests through different dances.

Guests were able to approach the stage to get a great shot with their favorite characters.

Different characters would rotate through the dance party on different days and times. There were usually three out at a time.

During a single performance, the characters danced, then rotated to a different spot on the stage. This allowed the three audience sections to take photos with each character without having to move around.

See our final look at DreamWorks Destination below.

These bathrooms were a holdover from the days of A Day in the Park With Barney. The theming remained untouched during DreamWorks Destination’s tenure. (And yes, we made sure there was no one in the bathrooms before taking photos).

The walls were painted like a blue sky with clouds. It featured children and three-dimensional props, like this birdhouse and kite.

There were flowers, birds, and butterflies.

Some butterflies hung from the ceiling.

Everything looked a little bit like it may have been painted by a kid.

A line of kids holding hands was painted on the back wall of the stalls.

There were children’s drawings framed on the stall doors.

A house was painted on one wall, with three-dimensional windows, roof shingles, and a door that said “kids only.”

One child pulled a Radio Flyer wagon with a teddy bear inside.

Look at our final tours of Fievel’s Playland and Curious George Goes to Town.