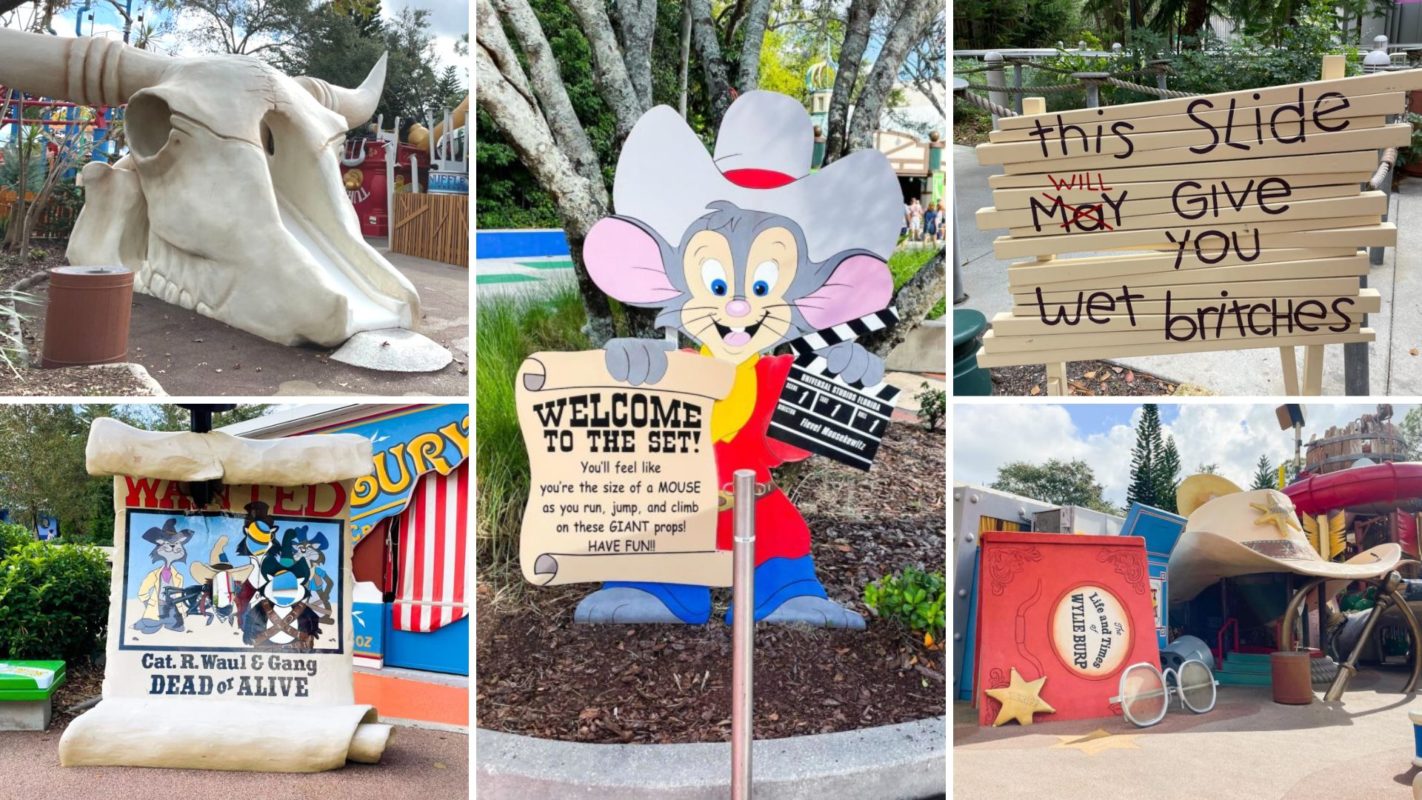 As we continue saying goodbye to Woody Woodpecker’s KidZone, it’s time for a final look at Fievel’s Playland.

When entering the play area, guests were greeted by a flat of Fievel holding a sign and clapboard.

“Welcome to the set!” his sign read. “You’ll feel like you’re the size of a MOUSE as you run, jump, and climb on these GIANT props! HAVE FUN!!!”

There was also a giant newspaper with the headlines “Fievel’s Playland” and “Tiger Saves Day.” The date on the Family Telegraph paper is July 4, 1892.

The Fievel’s Playland article read, “Children from around the world vote the playland the greatest place on earth. The playland has some of the most unique features found anywhere. Children [illegible] graphophone. There is even a giant pot of beans to frolic in.

“Guests will have the [illegible] …son, and don’t forget the live stages shows! Moms and Dads agree that Fievel’s Playland is great fun for the entire family. ‘I wish I could come here everyday’ says one child. ‘This is the best place I’ve ever seen, says another. One Parent was quoted as saying ‘Fievel’s Playland is a great addition to Universal Studios Florida.'”

Fievel’s cat friend Tiger was pictured on the paper next to his headline. Here’s a snippet of his article:

“Cat R. Wal’s plan to dupe the family back fires as Fievel, Tiger and the famous lawman Whylie Burp save the day… In the great tradition of the American dream, a new life begins for the Mousekowitz family and everyone’s favorite mouse.”

A spigot poured water into a bucket, where it leaked from holes onto a stack of cups, jars, cans, and more. Guests could pull the blue rope to “pump” the water out.

Kids would often play with the water in the Sandy’s Sardines tin.

A photo op let you put yourself into a wanted poster for Cat R. Waul and his gang.

Cat R. Waul is the villain in “An American Tail: Fievel Goes West.”

The wanted poster was right next to a “Catburys” box.

The box appeared ripped, with a red and white striped straw propping it open.

Across from the wanted poster was a giant red book.

It was on its side, stuck open so little guests could walk through the pages.

The book was “The Life and Times of Wylie Burp,” and his sheriff’s badge sat in front of it.

Large round glasses also sat next to the book.

It was leaning against a box of Swift & Western (instead of Smith and Wesson) no. 45 slugs.

A huge key on a ring was in front of a small bounce house.

The bounce house was actually inside a giant cowboy hat.

Signs let guests know the hat is for little kids only. Specifically, guests could not be taller than a matchstick to play.

A matchstick was on the railing of the stairs for guests to measure themselves against.

The bounce house was surrounded by a net for safety.

A tag for the Green River Hat company was inside. It was apparently a size 7 1/2.

A giant red and gold paisley bandana wrapped around the hat.

There were a series of themed benches for parents or kids to rest on.

This bench looked like a giant tin of needles and pins “of the sharpest and straightest variety found.”

Next to the pins were three giant spools of American thread.

Then there was a ruler from Tara-Bull Tailors.

After the ruler were stacks of pink tickets for a Cincinnati train.

They were “good for one passage.”

You’ve heard of pencils, now get ready for “drawin sticks.” This bench was a box of Nelms no. 2 drawin sticks that read “premiere writin led this side of the canyon.”

After the pencil box was an orange and blue shoelace box. These were “Laces by Lawrence.”

The last stretch of bench resembled yellow cheese, a favorite snack of mice like Fievel.

There were several giant objects to play on and in, like this giant gray cowboy boot.

The boot had a few holes in it, so guests could run through it.

Next to the boot was a pot, with its handle operating as a slide and its lid propped open with giant utensils.

The inside was another small bounce house. Unfortunately, this bounce house and slide had not been available for some time, with the entire thing blocked by nets and tarps.

It had a fake fire beneath it like a meal was being cooked.

Blue and red hopscotch was built into the ground in front of the benches.

There was also a spoon seesaw.

The seesaw looked like it had been made out of two spoons, rope, matches, and a bent piece of metal.

The spoons were the seats, the ropes were the handles, and the matches were foot rests.

Past the pot handle slide was a blue and white teacup.

A giant flower on the side of the teacup acted as an opening for kids to crawl inside.

Parents could also set them directly inside and bigger kids could stand on the cup’s saucer.

It had handles wrapped in rubber and could spin.

A package for Professor Largman Hoof Liniment (established 1877) was next to the teacup.

It was propped next to a scrub branded with R.L. Ward Livery.

Ropes hung from the scrub that guests could walk through.

Another small slide is nearby, descending from some fake cacti.

This slide was a harmonica by M. Hohener’s Newest & Best. The name is a reference to Matthias Hohner, a real harmonica maker in the 1800s.

Above the tunnel was a tunnel propped up by giant sticks. The tunnel had a net section, between a can of licorice and another can of tomatoes.

Nearby was a giant crate spray-painted with “explosives.”

This was directly under the water slide stairs. The large metal chute pictured here was used to transport the rafts back up to the top. There was a giant red-fletched arrow holding up part of the slide.

The stairwell and elevator shaft were mostly made to look like pieces of wood.

A sign at the entrance read “this slide may will give you wet britches.”

All of the writing looked like it was done by a child (or a mouse).

A giant coin tied to a needle posted the approximate wait time.

Another ticket sign on the wall in the stairs read “do not play Cards with the Spider (he cheats)”.

No standing and no photography was allowed on the slide.

Guests hopped on a teal raft that took them through a mostly enclosed slide.

Here’s where the rafts came back up.

The slide looked like various pieces of plumbing and cans connected to each other.

Guests came out near the cowboy hat bounce house.

Mouse Climb and The Graphophone

Outside the Mouse Climb entrance, two more cans propped up part of the slide.

This one was Munchmiester’s Nut Brown Boot Top Fluid.

The Mouse Climb was a netted climbing area.

Guests could go up the stairs and climb down the Mouse Climb or slide down through the Graphophone.

The entrance to this regular slide was at the top of the Graphophone’s horn.

There were two music-note-shaped railings for lowering yourself into the slide.

A ripped piece of sheet music instructed guests to go one at a time with their feet first.

There was a giant bandaid stuck on the top of the graphophone.

The slide came out beneath the red Graphophone box.

In front of the box was this striped canteen.

It had three bullet holes and two tiny green handprints on it.

Fievel’s sister Tanya was on the ace of hearts. Behind that card was the seven of pawprints.

The Graphophone had a belt laying across the top of it.

There was a giant handle.

Guests could walk inside the Graphophone, which had large hanging padded tubes, kind of like the scrub ropes.

One of the most iconic elements of Fievel’s Playland was the giant cow skull and spine.

A ramp with railings went up the spine, but guests could also play underneath it among the ribs.

The cow had one gold tooth and nets within its eyeholes.

The nets were of course to keep guests from climbing out of the sides of the slide that went through the cow skull’s face.

It was right next to the water slide’s exit.

Beneath the skull and spine was a drum, with two bone-shaped drumsticks.

The small bones were attached to giant bones with ropes, so guests couldn’t steal them.

There were also bones pictured on the ground.

We also took a final look at the Curious George Goes to Town play area in KidZone.

FULL GUIDE to the 2023 EPCOT International Festival of the Arts