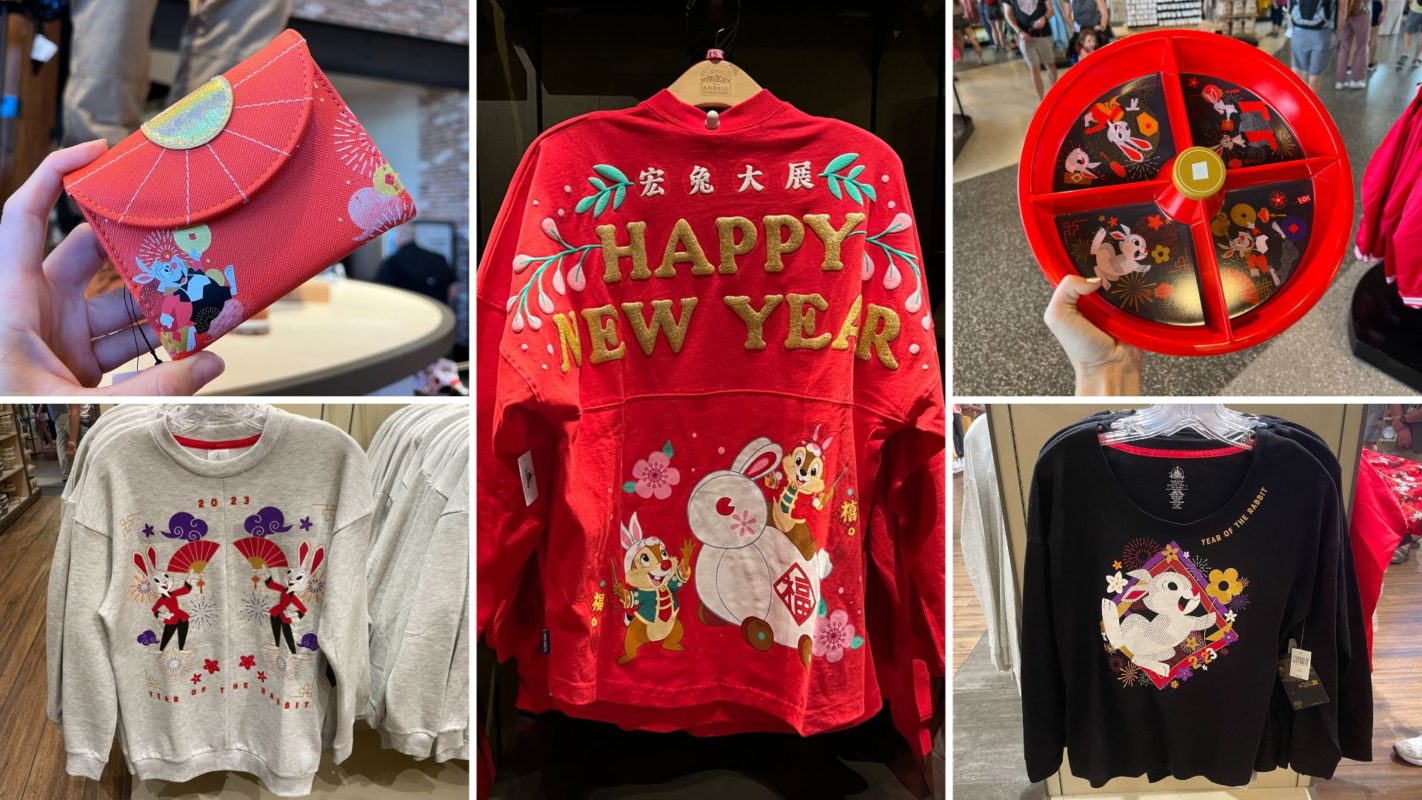 We’re jumping for joy and hopping all over Walt Disney World in search of Lunar New Year merchandise! With 2023 being the Year of the Rabbit, new Lunar New Year items are popping up, so we’ve rounded up everything we found so far to celebrate the occasion!

We found most of the new merchandise at World of Disney in Disney Springs. But the Spirit Jersey was in Star Traders at Magic Kingdom and Serka Zong Bazaar at Disney’s Animal Kingdom. And the youth apparel and spinning tray were in Creations Shop at EPCOT.

Thumper is featured prominently on the merchandise collection, along with Judy Hopps, Winnie the Pooh’s friend Rabbit, the White Rabbit, and more.

This black long-sleeved shirt has Thumper holding a yellow flower on the front.

“Year of the rabbit” is in yellow along the neck.

Colorful shapes, flowers, and fireworks are behind Thumper.

Judy Hopps from “Zootopia” is wearing a red jacket and holding a traditional folding fan on this gray sweatshirt.

Most of the design is mirrored, with two Judys, purple clouds, and fireworks.

“Year of the rabbit” is across the bottom.

The red bomber jacket has solid sleeves, but the torso is patterned all-over with images of Disney rabbits.

It has a golden zipper up the front.

The White Rabbit from “Alice in Wonderland” is running while holding a golden coin.

Rabbit from “Winnie the Pooh” has a tray of bao buns.

The rabbits from “Sleeping Beauty” are in their boots, exchanging a red envelope.

Thumper is gifting a flower to Miss Bunny.

The jacket has pockets.

Judy is also pictured, with a lantern floating above her hand. The rabbits are surrounded by red and gold diamond patterns and fireworks.

The White Rabbit is running late on this black T-shirt.

“2023” is behind him in colorful numerals, along with fireworks and coins.

“2023 Year of the Rabbit” is also in gold lettering on the inside of the shirt’s neck.

This red sweater has sparkling gold lines around the neck, wrists, and waist.

Mirrored images of Thumper and his flower are on the front.

Fireworks and lanterns are around the famous rabbit.

Thumper’s face replaces the zero of 2023.

This red spinning tray has a golden circle center.

The only Lunar New Year item we’ve found that doesn’t feature a rabbit is this Donald Duck figurine. Donald is wearing blue traditional Chinese clothing. He stands on a base littered with gold coins, next to a small tree.

The box the figurine comes in also features Mickey and Minnie celebrating the year of the rabbit.

This wallet by Loungefly is red, with a golden circle on the flap, meant to resemble the red envelopes full of money, called “Hong Bao” in Mandarin, usually given as gifts during the Lunar New Year.

White stitching extends from the golden circle. The White Rabbit is on the front, with fireworks and coin-like circles.

The wallet snaps shut. Inside are several card slots and a bill slot.

Rabbit from “Winnie the Pooh” is on the back with bao buns.

A white rabbit (but not the White Rabbit) is on the left breast with pink flowers.

“Happy New Year” is across the back in sparkling gold lettering.

More pink and green flora is around it.

There are four Chinese characters above “Happy New Year.” The sentence is actually a pun in Mandarin, albeit written backwards from how it’s traditionally given. It’s usually read “大展宏图,” or “dàzhǎnhóngtú'” which means showing your great ambition and achieving it. The character for rabbit, “兔” or “tù” sounds similar to that of ambition, “图” or “tú,” but with a falling tone instead of rising. It’s a pun that very much does not carry over in English, but may make Mandarin speakers chuckle!

Below the words is an image of Chip and Dale playing with a rolling white rabbit toy. They’re both holding lanterns on strings and wearing rabbit ears.

Still haven’t seen your favorite rabbit? Oswald the Lucky Rabbit is pictured on lantern-shaped pins also available throughout Walt Disney World. Let us know if you’ll pick any of these up in the comments below!