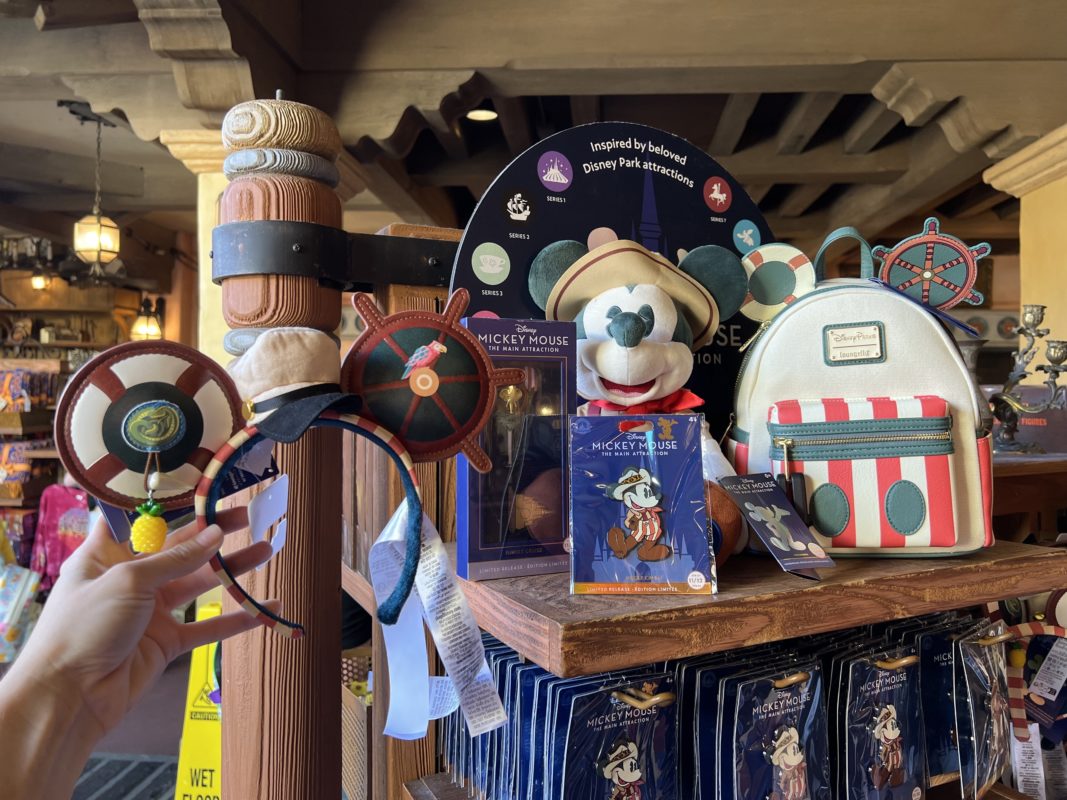 As we set sail looking at the back side of 2022, the Mickey Mouse: The Main Attraction Jungle Cruise series — series 11 and presumably originally set for release in November — has finally docked in Adventureland at Walt Disney World! Specifically you can find these at Plaza del Sol Caribe Bazaar.

These new ears feature a candy cane-stripe pattern on the center band with a blue underside. The two ears are themed after nautical items.

The left ear is based on a life raft with a snake in the middle. A necklace with a tooth and a plastic pineapple hang off the ear.

On the right is the skipper’s steering wheel, with a parrot sitting at the center. And right square in the middle is a skipper’s hat.

The side of the headband features “Jungle Cruise” embroidered into the side.

The back side has the Walt Disney World 50 logo embroidered on the left ear.

This Loungefly mini-backpack follows the same pattern as other Mickey Mouse: The Main Attraction merchandise we’ve seen during the past year. The backpack itself is a cream color and appears to be made of canvas rather than faux leather, but it’s still made of the same material as always. Two ears sit atop with a life preserver and a skipper’s wheel, just like on the ear headband.

The sides and front pocket have a red and white candy cane stripe pattern.

The back side is a mild shade of green, somewhat reminiscent of the iconic “go away green” color seen at Disney Parks worldwide. The Jungle Cruise and 50th Anniversary logos flank the top and bottom.

Inside bears a pattern which features a tooth, parrots, snakes, elephants, and pineapples.

The pin features Mickey Mouse in an outfit reminiscent of jungle explorers, although quite a bit different from the Cast Member costume for Jungle Cruise skippers. It comes on the same card as other pins from the Main Attraction series.

The key features a Mickey Mouse silhouette on the head made of two candy cane stripe ears and a skipper wheel at the center with a golden elephant right in the middle.

The 50 logo and “Jungle Cruise” wordmark are at the bottom, which is shaped like an oar.

This Mickey Mouse plush is of course the centerpiece of the series, featuring the main mouse in the Jungle Cruise skipper-esque outfit. To match the aesthetic of the jungle, his eyes, nose, face, and ears are tinted a mild shade of green.

The foot of course has the characteristic Mickey Mouse: The Main Attraction patch denoting this is series 11 of 12.

Mickey wears a khaki shirt above candy cane stripe suspenders. He carries a shoulder bag with an elephant on the front.

Off the side of his suspenders is a ribbon with a tree and fish attached.

The back of his ear of course has the Walt Disney World 50 logo embroidered on.

We found all of these Mickey Mouse: The Main Attraction Jungle Cruise items at Plaza del Sol Caribe Bazaar in Adventureland, so be sure to stop in after your next Jungle Cruise voyage to pick up these new items! There’s probably still time to pick up the Haunted Mansion series as well if you missed out. And let us know what you think in the comments below!