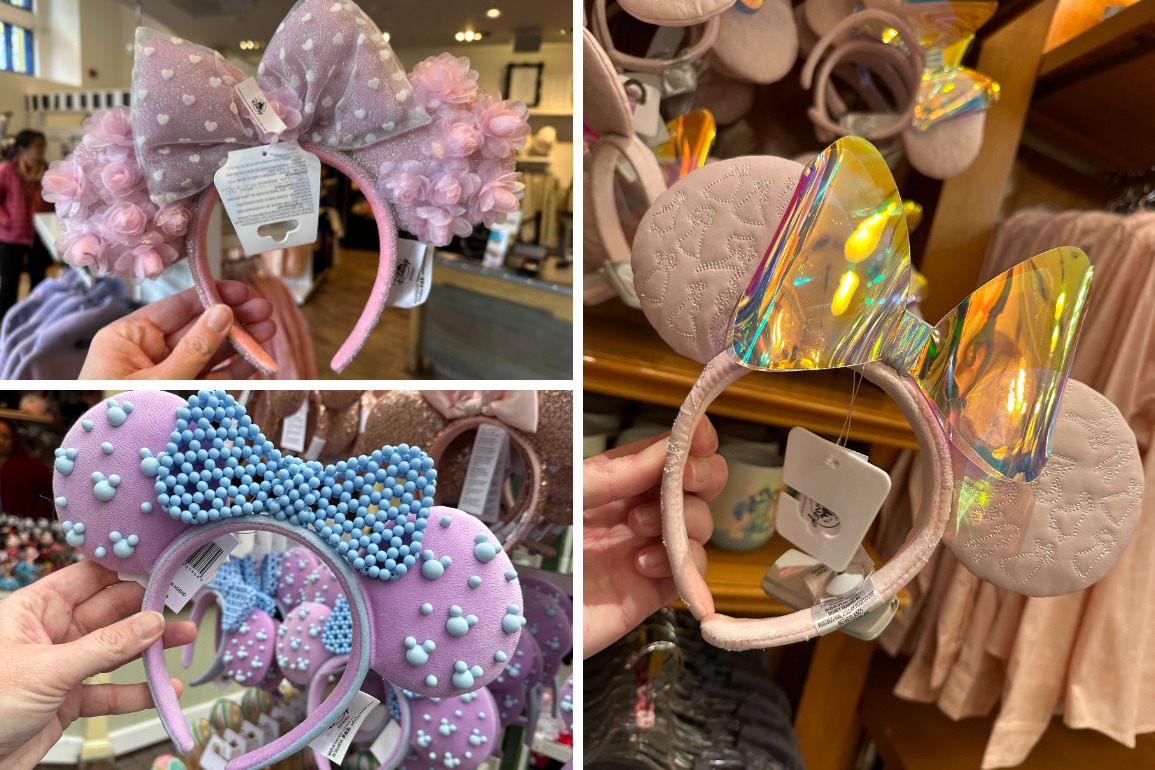 Minnie ear headbands are always in season at the Disneyland Resort thanks to three new releases that feature flowers, beads, and even Disney Princesses!

Valentine’s Day is less than a month away. You could give flowers, or maybe a heart-shaped box of chocolates. But why not have both, and in a form that won’t wilt or melt? Luckily, this ear headband has you covered.

The pink bow is covered with a lacy mesh that’s covered in tiny white hearts.

Meanwhile, the ears have plenty of fabric rosettes.

The interior of the headband features pink velour.

The backs of the ears are bare, allowing the glittery pink fabric to shine. We found this at The Disney Dress Shop in the Downtown Disney District.

For ears that really pop, this beaded Minnie ear handband stands out!

The base is a lavender color, accented with light blue beads, many in the shape of Mickey Mouse’s head.

These Mickeys aren’t quite so hidden.

The bow itself is comprised entirely of blue beads.

The velour headband has a two-tone effect, with the exterior matching the light blue color of the beads, and the interior having the same lavender color as the ears.

We found this at the stand next to Disneyana near the entrance to Disneyland, though they are widely available around the resort.

Finally, fashion company Stoney Clover Lane has designed an ear headband that pays tribute to the Disney Princesses in a subtle way.

The translucent bow is iridescent, giving off a rainbow of colors that stand out against the pink base.

The ears and headband are embroidered with the outlines of Disney Princesses in silver thread.

The outlines aren’t terribly clear, though certain elements can be identified, like Mulan’s sword or Cinderella’s hairdo.

Like the other ear headbands, the band is lined with a velour fabric to prevent slippage.

The embroidery continues onto the back. We found these at the Fortuosity Shop on Main Street, U.S.A.

For more endearing fashion, check out this pink corduroy Minnie ear headband that was recently released at the resort!

PHOTOS, VIDEO: One Last Look at Curious George Goes to Town and The Ball Factory in KidZone at Universal Studios Florida