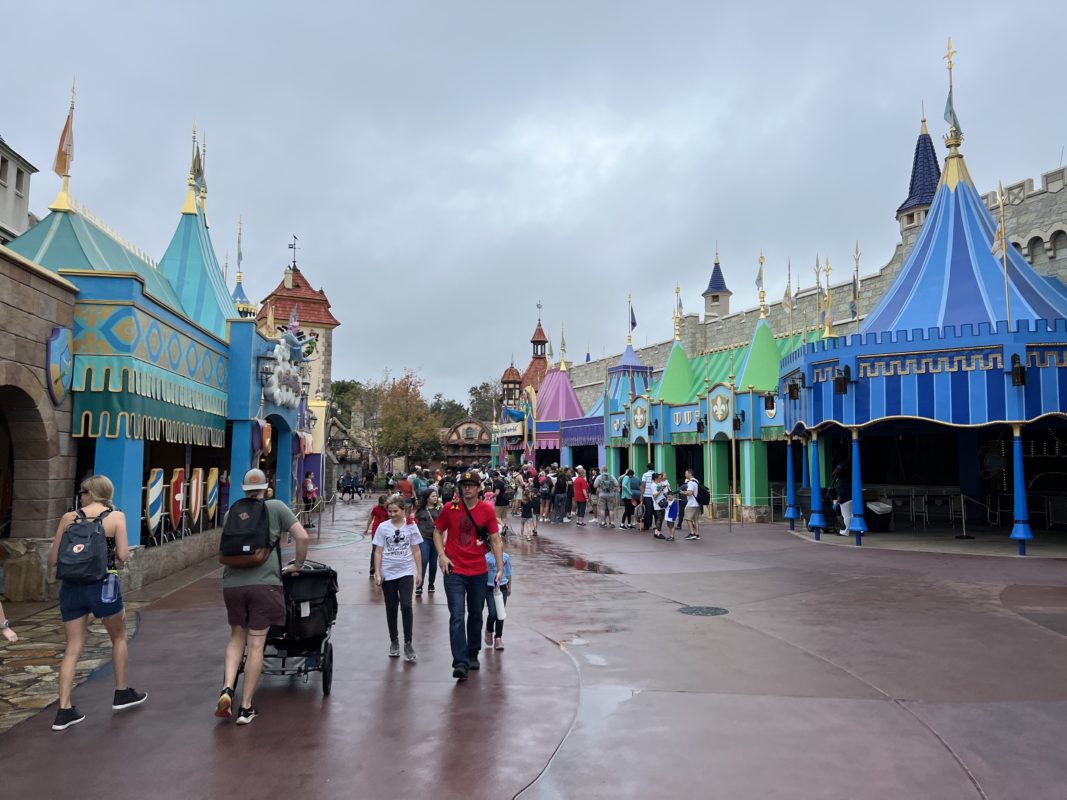 Happy New Year’s Eve from Magic Kingdom! We’re facing some low crowds this morning (we’re not complaining) so let’s get started before they start coming in!

It’s a super foggy day, why is it always foggy on New Year’s Eve? The castle was barely visible in the early morning skyline.

Over at Uptown Jewelers, we found the purr-fect pair of The Lion King Crislu earrings featuring a young Simba like the markings that Rafiki makes on the tree.

Tomorrowland Light & Power Co. appears the same from the outside, where the 1994 Tomorrowland elements were removed from it a few days prior.

PeopleMover was down for most of the day so we had to get our views of TRON from the ground. A few of the vehicles were testing today without audio, although weights continue to be used.

The long banners atop Princess Fairytale Hall and Sir Mickey’s are still missing, and one of the stand-by entrance screens has been covered.

Inside Sir Mickey’s, there is a very cute leather-like princess heart-shaped handbag. It comes with a removable strap and pink accents for $24.99.

There is also a fun princess cup with straw that has Mulan, Belle, Aurora, and a few others. The cup has liquid-filled walls with glitter that settles rather quickly on the bottom. The cup is near the handbag by the registers and is $14.99.

Crowds were pretty low today as we made our way around the park. We expect more to show up later on in the day as the park will be open late and feature two showings of “Fantasy in the Sky” fireworks again. We were going to hop aboard “it’s a small world” to check on the condition of the rather dirty attraction boats but it was down when we passed.

We passed by Pirates of the Caribbean to check on the scrim that has been wrapped around the small courtyard area in the Lightning Lane queue. We didn’t see any visible changes from the outside of the entrance and it isn’t clear yet what is happening behind the scrim.

Cinderella’s Carriage is out on display with a PhotoPass photographer out front! Leafy foliage is wrapped around the carriage which should only be here for the New Year’s celebrations.

We hopped over to BVG at Disney’s Contemporary Resort where we found a new set of 100 Years of Wonder Eras journals. This set comes with three vintage-inspired journals featuring Disneyland logos.

We love this minty-colored journal with the old school Disneyland on the front! What’s even more fun is these journals have a small text on the back that reminds you that it is not a valid ticket.

Next to the journals was a glimmering 50th anniversary Mickey Mouse on The Haunted Mansion Buggy Funko POP! Figurine. Mickey wears the signature groundskeeper outfit while holding a lantern in the infamous doom buggy. He’s a little late to the party but we love him just the same! Are you picking one up?

We popped downstairs to see what was happening in the lower lobby level. Signs were posted for a fire alarm test planned for that morning although we did not hear one during our visit that was at the same time.

We then hopped over to Disney’s Grand Floridian Resort and Spa. Just look at that tree! The holiday decor around the parks and resorts will be up for a few more days.

Construction continues on the back buildings at the resort. It appears as though much of the exterior work on the balconies and staircases is nearing completion and the roofing is still being worked on.

We’re starting to see more progress at Narcoossee’s on the water, which has been closed for quite some time. The upper panels under the roof are still blocked out with a wood piece but the roof appears to be next up to receive a refresh.

Signs are up along the dock to the boat launch that inform guests that the watercraft will suspend service from 45 minutes before the fireworks to 30 minutes after the fireworks. We don’t see this sign out too often.

Our last stop of the day was at Disney’s Hollywood Studios where a DJ booth has been set up in front of the Chinese Theatre. Lighting and speakers are placed on either side of the booth where there will be a dance party and a short countdown to midnight!

That’s all for us today, have a safe and Happy New Year!