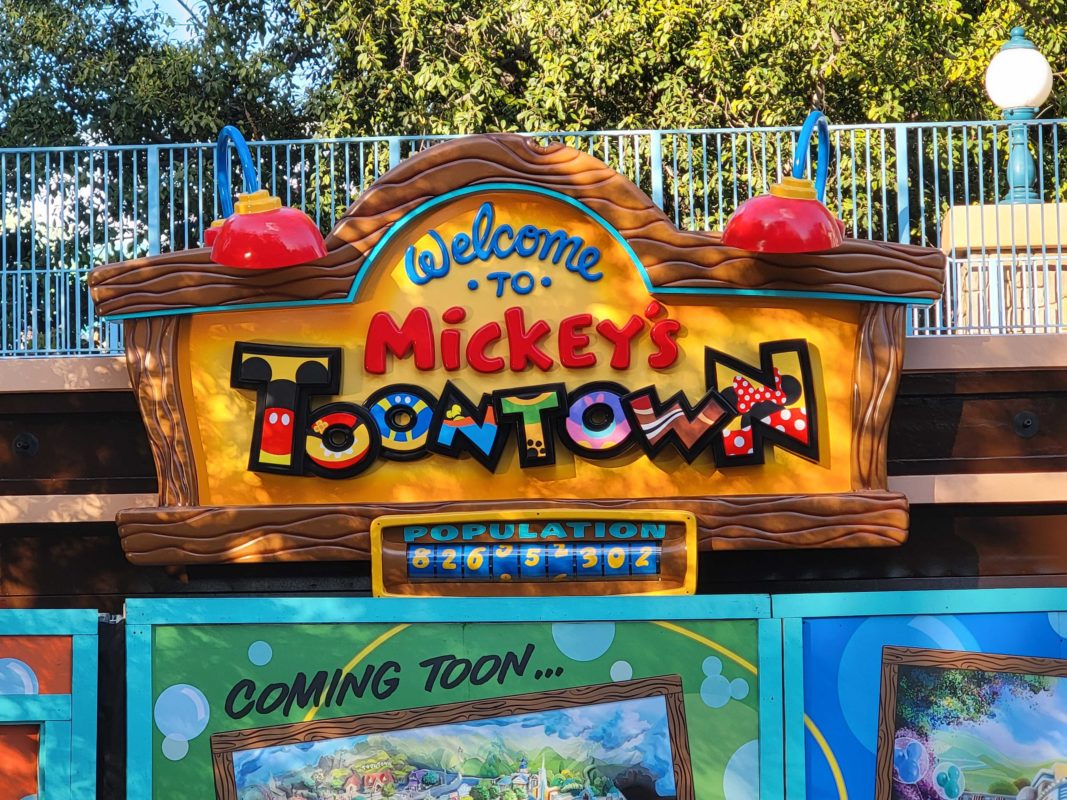 Hey there, hi there, ho there! We know you’re itching to get into Mickey’s Toontown once it reopens from its yearlong reimagining on March 8. While we have just under two months until the project is complete, we got our first peek at the new look with the updated Mickey’s Toontown sign hanging off the Disneyland Railroad bridge today! We first spotted it on TikTok, now we have a much closer look.

The sign still bears much of the same look as it did when Mickey’s Toontown opened in 1993. As of right now, the population counter is not spinning around yet, but we expect this to be turned on closer to the land’s reopening.

The faux wood border and yellow gradient at the center has received a fresh coat of paint, and the blue cursive “Welcome to” letters are still the same. The red “Mickey’s” has also received a nice touch-up. The big difference is the word “Toontown” itself.

Each letter now features art which represents a different Disney character. “T” features a Mickey silhouette with his trademark red shorts. “O” has a red dop and bottom with bold in the middle, a bonnet flanking the center hole, and a visible orange flower in homage to Clarabelle Cow. The second “O” resembles Donald Duck’s clothes, with a blue button-down shirt and orange at the bottom for his webbed feet. And the “N” is for Goofy, with his trademark hat, orange for his shirt, and blue for his pants.

On the second half, we have a yellow “T” with a green stripe and paw print to represent Pluto, another “O” with purple, pink, and a bow to represent Daisy Duck, “W” made of brown with a black-and-white stripe and one red dot to represent Chip ‘n’ Dale, and finally the second “N” for Minnie Mouse, complete with her bow and silhouette.

The sign disappeared in early April last year, making this its first appearance in more than 9 months.

Work is still underway on the passage into Mickey’s Toontown, and the newly reimagined area will open March 8. But it won’t be entirely that long, as Mickey & Minnie’s Runaway Railway opens January 27 inside the land complete with some new queue areas and scenes.

It’s also worth noting the Disneyland Railroad station, which has remained open, still has a sign with the old design atop.

How do you feel about the new Mickey’s Toontown sign? Let us know in the comments below!