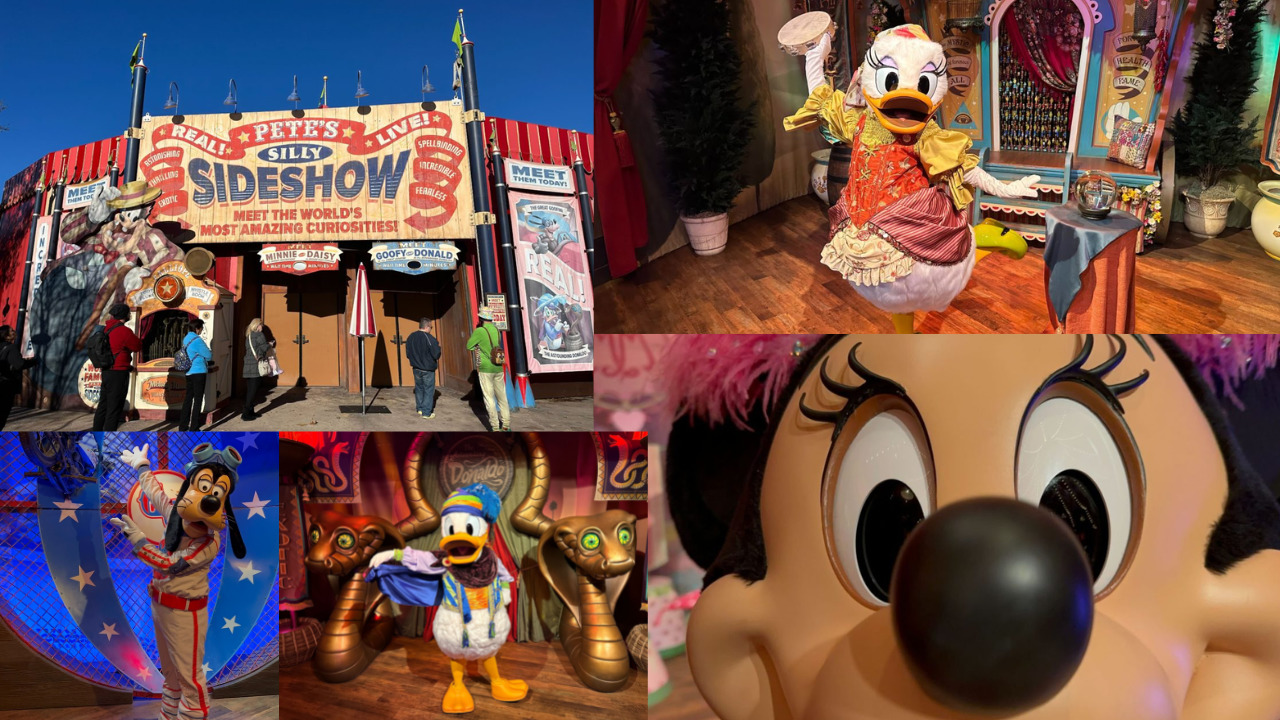 The character meet and greets of Pete’s Silly Sideshow have returned to Magic Kingdom this weekend after almost three years.

Guests are once again be able to meet Minnie Magnifique, Daisy Fortuna, The Astounding Donaldo, and The Great Goofini as of today. For those unaware this is a chance to meet Minnie Mouse, Daisy Duck, Donald Duck, and Goofy in special costumes themed to the Storybook Circus section of Fantasyland.

The fun begins with the authentic calliope outside, one which used to be displayed on Main Street U.S.A. at Disneyland Paris before being moved to the Magic Kingdom.

Banners outside advertise the characters guests can meet under the big top.

Hours may change, but characters are currently available from 10AM to 7PM.

There are two separate queues, one to meet both Daisy and Minnie…

And another for the boys, Donald Duck and Goofy. The characters do no appear together in one photo though, you can only meet one at a time, but you get to meet two consecutively after waiting in line.

The characters even came to open the door to all the guests waiting at the opening time, 10:00AM.

We then followed the characters inside.

The queue and backdrops are full of fun references to Disney’s past and beyond. The giant Pete head is a reference to the heyday of Coney Island.

Imagineers leant pretty hard into the references to EPCOT’s former Maelstrom attraction with “If you seek beauty, enchantment, charm…”

The classic boat ride (replaced by Frozen Ever After), began with a faceless narrator stating that “Those who seek the spirit of Norway face peril and adventure, but more often find beauty and charm.”

Minnie is once again magnifique as a poodle trainer in the Storybook Circus.

What makes these meet and greets so special are the props and costumes the characters have, which you actually can’t find at any other Disney theme park on Earth!

Next we got up close with Minnie Mouse!

Minnie has a fabulous backdrop with her trained poodles.

There are no PhotoPass photographers inside Pete’s Silly Sideshow, but these automated cameras will be activated soon. A character attendant cast member will be happy to take a photo on your personal device though.

Goofy was quite proud of his crashed motorcycle for some reason.

The astounding Donaldo is number one!

The entire facility is filled with incredible references to Disney’s past, including these Kaa-like snakes behind Donald.

The regular meet and greets of Pete’s Silly Sideshow have not operated since Magic Kingdom closed due to COVID-19 in March 2020. When the parks reopened later that summer, the space operated as a relaxation station where guests could remove masks while social distancing. Relaxation stations all closed by May 2021. Some random characters appeared at Pete’s Silly Sideshow in late 2021.