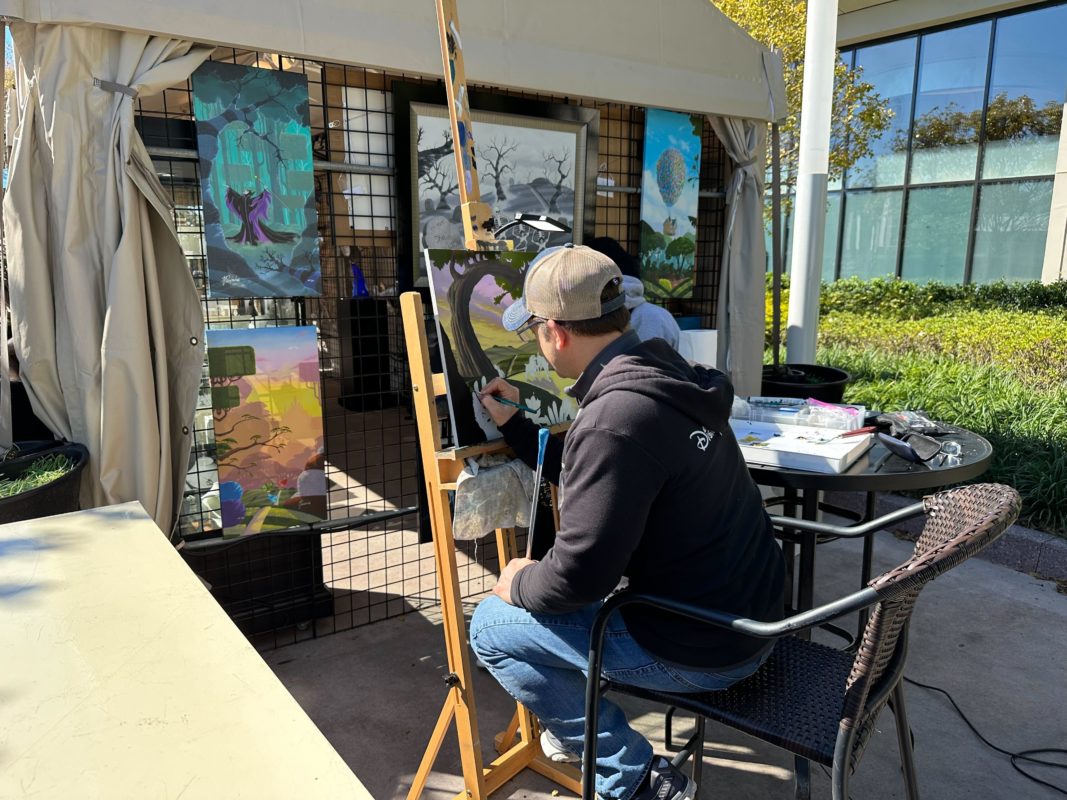 The 2023 EPCOT International Festival of the Arts has begun, and as the name might suggest, there’s art all over the park! Guests looking to pick up some Disney-inspired art of their own can find offerings at the newly-renamed Promenade Fine Art.

The kiosk, previously known as Wyland Galleries, can be found in World Discovery, near the entrance to Creations Shop. In addition to having their work sold there, artists working in a number of media are making appearances here during the festival.

There are three actual booths, plus art displayed outside.

Some work, especially those exclusively debuting at the festival, are Disney-inspired.

But there are also pieces that aren’t related to Disney.

There are sculptures and dimensional pieces in addition to the prints.

Some of the Disney pieces are subtle, like the realistic painting of the Finding Nemo characters in the circular, porthole-esque frame.

The promenade is also home to much larger pieces, such as furniture. The glass table above features a scene from “Snow White and the Seven Dwarfs” underneath.

Another table has a scene from “The Little Mermaid,” using the rocks and coral as legs.

This table recreates the infamous Sorcerer’s Apprentice scene from “Fantasia.”

Some of the same figures are available separately as well.

Hevia will appear at the booth from 12 p.m. to 6 p.m. daily through Wednesday, January 25.

There are Disney characters as well as animal sculptures.

Miller will appear at the booth from 12 p.m. to 6 p.m. daily through Wednesday, January 25. He was there working on a piece when we visited.

Miller is known for his oceanic artwork, but his pieces feature a range of subjects and environments.

Corona will be available from 12 p.m. to 6 p.m. daily through Wednesday, January 18. His pieces feature Disney characters, especially Mickey Mouse.

Corona also currently has a mural on the Disney Springs Art Walk.

Warren can be found signing here from 12 p.m. to 6 p.m. daily through Wednesday, January 25.

In addition to his paintings and prints, he has a book of his work available.

It looks like Lady and the Tramp will be in the scene he was painting this morning.

Rogerson is premiering a new piece, “Ghost Chasers,” at this year’s festival. Inspired by the 1937 short “Lonesome Ghosts,” it shows Mickey Mouse, Donald Duck, and Goofy surrounded by a quartet of ghosts looking to have some fun.

Rogerson will appear at Promenade Fine Arts from 12 p.m. to 6 p.m. daily through Wednesday, January 18. Beginning January 19, he’ll move to the Mexico Pavilion, where he’ll be signing from 3 p.m. to 7 p.m. daily for the remainder of the festival.

The art for sale is just one component of the festival, which includes displays throughout EPCOT, as well as Food Studios and live performances, including the Disney on Broadway Concert Series. Keep reading WDWNT for our complete coverage of this year’s festival!