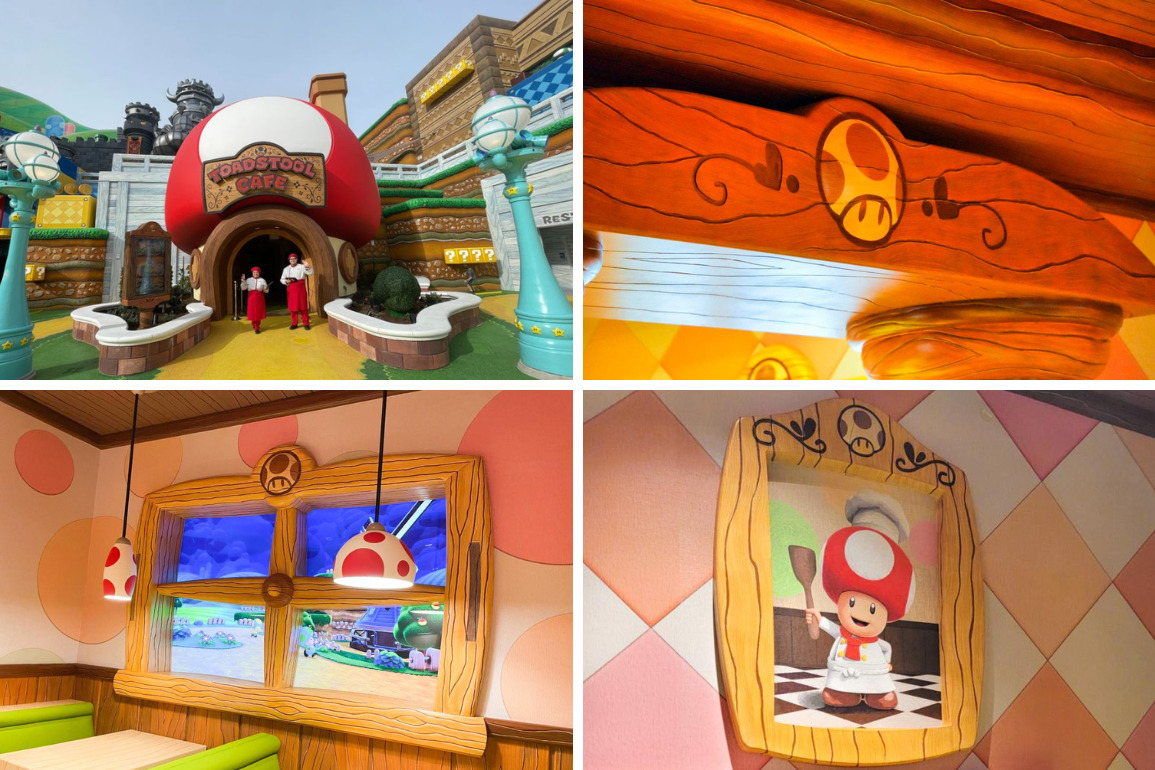 Let’s take a look around Toadstool Cafe, which has opened with the rest of Super Nintendo World at Universal Studios Hollywood for technical rehearsals. The restaurant is known as Kinopio’s Cafe in Universal Studios Japan (Kinopio is Toad’s Japanese name), where it has a different menu, too. But both versions are almost identical in appearance.

Guests in outfits reminiscent of Chef Toad’s costume stood at the entrance to greet guests. The cafe is shaped like a toadstool with a large, wood-esque archway. Two blue lampposts with Super Stars sit on “grass” on either side, with planters behind them. The planter on the left hosts the menu, while the planter on the right has a Toad topiary.

The Team Members wear red chef hats with matching pants and aprons. Their chef coats are white with red accents.

Here’s how it looks illuminated at dusk.

They have menus available to preview before you enter. Stay tuned to our full review of all the specialty dishes and drinks on the menu.

The cafe entrance is decorated in shades of faux-woodgrain with checkerboard walls in peach, white, and light pink.

A carving of Toad is above the doorway.

The host stand has another Toad carving with spiral columns encasing an engraved leaf.

The faux woodgrain themes continue through the dining areas. The floor is done in contrasting shades between seating areas and walkways. Large columns with carved spirals in shades of pink break up the area, along with archways with the spiral wood designs. The walls in the main dining area is has pastel polka dots against a white background.

In the center of the main dining area, a large wooden post rises up. A Super Mushroom has seemingly arrived via warp pipe.

Above is the underbelly of the toadstool, featuring art of other power ups. Clockwise from the top are images of a Super Leaf, a Yoshi egg, a Super Acorn, a Super Mushroom, a Turnip, and a Fire Flower.

The Toad carving makes another appearance at the condiment station.

The trash and recycling bins have framed images of Banana Peels. A little Toad carving adorns the top of the station, above the shelf for trays.

The “windows” give you a look into the Mushroom Kingdom. Above the wall booths are lamps whose shades are shaped like red Yoshi eggs.

These booths have wooden frames and tables, with green padded bench seats.

Some of the windows also look into the kitchen, where Toads are hard at work preparing meals.

There was also a small, private room with crescent booths. It was roped off during out visit.

The rest of the dining space is occupied by four-top square tables. The chairs have curved backs, with ball-shaped accents.

The registers, where you place your orders, are set into a long counter. Each station has a lighted number.

The shelves behind the counter are lined with power-ups. From left to right, top to bottom, we spotted a Turnip, a Super Leaf, a Yoshi egg, a Super Acorn, a Super Mushroom, a Super Bell, a Fire Flower, and a Mini Mushroom.

A portrait of Chef Toad hangs over the mantle of a faux-fireplace.

Watch our video walkthrough of Toadstool Cafe below.