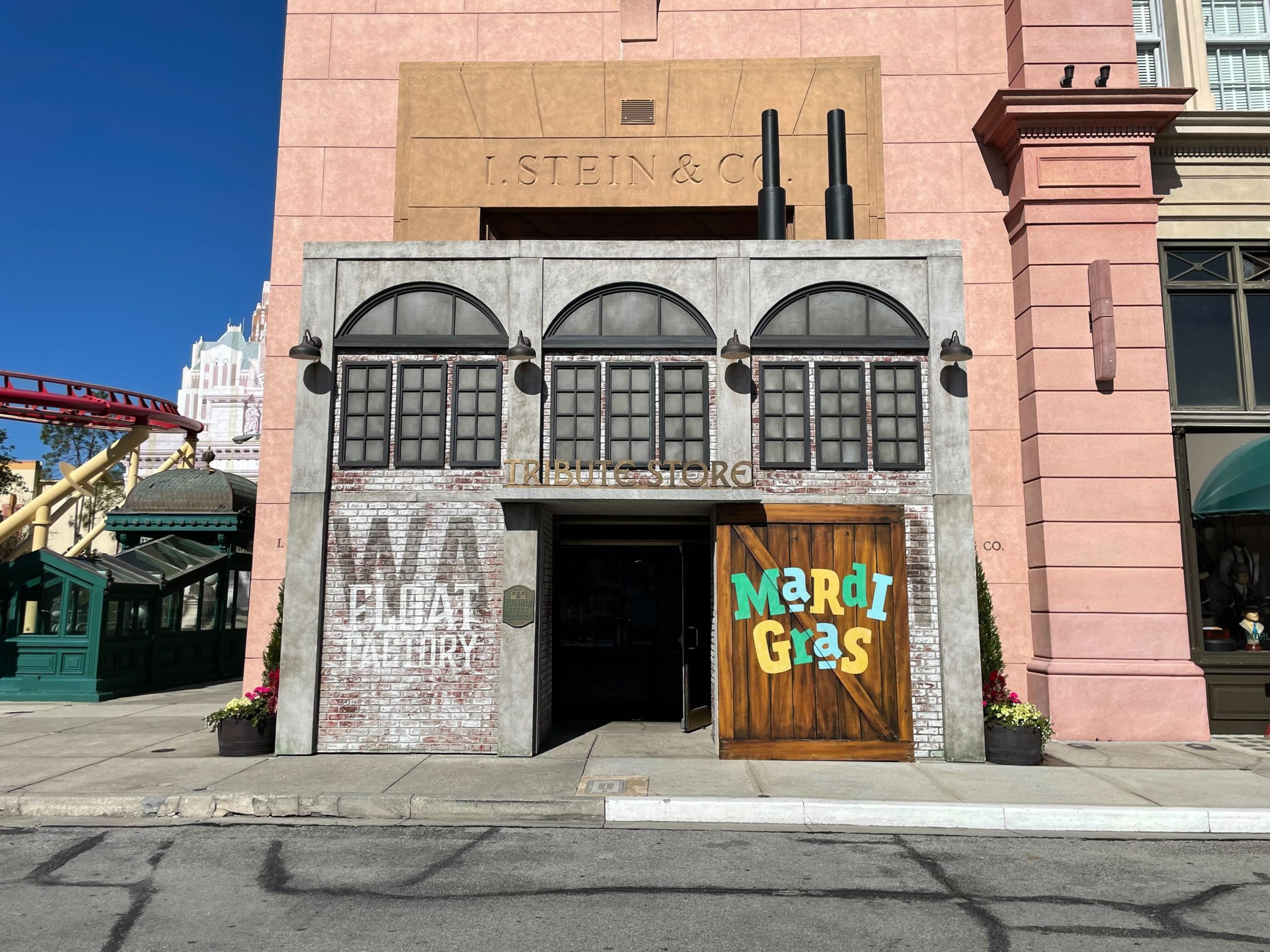 If you are looking to visit Universal Orlando Resort this Mardi Gras season, things may look a little different than you may have remembered — including the location of the Tribute Store.

The Tribute Store has become an iconic Universal staple, constantly revolving its theme to the season or event taking place in the parks. During Halloween Horror Nights, guests are able to shop in eerie and intensely themed rooms which come together to tell one larger story that takes place within the event. During the holidays, we are able to enter an entirely new world of festive fun that also follows its own storyline. Another popular event that affects the Tribute Store’s theming, is Mardi Gras.

Mardi Gras will begin on February 4th at Universal Orlando Resort, within Universal Studios Florida, and if you are looking to check out the new decor of the Tribute Store, we may need to re-route you! It has now been confirmed, after much speculation, that the Tribute Store will be moving for the event, and can be found in the Hollywood section of the park. Williams of Hollywood (formerly the Prop Shop), The Darkroom, and additional shop spaces will host the reimagined offering.

It will be interesting to see how the new location affects the sizing and atmosphere of the Tribute Store, and how it will add more Mardi Gras fun to the Hollywood section of the park.

For those of you who are new to Universal’s Mardi Gras, this is what you can expect, according to Universal:

We’re Going Beyond the Bayou for Mardi Gras!
What’s even more exciting than Mardi Gras? Universal’s Mardi Gras! We’re going beyond the bayou with an awesome party inspired by Carnaval celebrations from around the world. Watch a parade (on select nights) of spectacular floats. Sample flavors from the bayou to Brazil and beyond. Enjoy live music all around and concerts (on select nights), then go ahead and get your beads and your party on!

Prices, times, dates, entertainment, event and/or experience details are subject to changes and/or cancellation without notice.

Don’t Miss the Spectacular Parade
The dazzling floats will be rolling, the colorful performers will be moving to the beat, and the beads will be flying. This year’s parade features traditional floats plus six all-new floats straight from New Orleans and the party will bounce!

Float Riding
You haven’t experienced Mardi Gras until you’ve experienced it from atop one of our spectacular floats. Toss beads to the crowd while you make your way through the streets for an unforgettable time. A limited number of spots are available per night.

Reservations will be accepted in-park via the Virtual Line™ experience in the Official Universal Orlando App.

During your Mardi Gras experience, you can also enjoy the Mardi Gras Float Ride and Dine Experience! The package allows guests to ride on a Mardi Gras parade float plus enjoy a 3-course meal from one of four participating Universal Orlando Resort restaurants for $84.99 per guest. Want to learn more? Click here!

The official concert lineup has also been released, which you can find here.

You can also get prepared for the event by taking a look at the spectacular parade! Take a look at last year’s here: