The Paintbrush Churros come to Refreshment Outpost in 2020, having been at Taste Track last year. Last year, a Popcorn Pairing Flight was located at The Painter’s Palate, but with completely different beers. 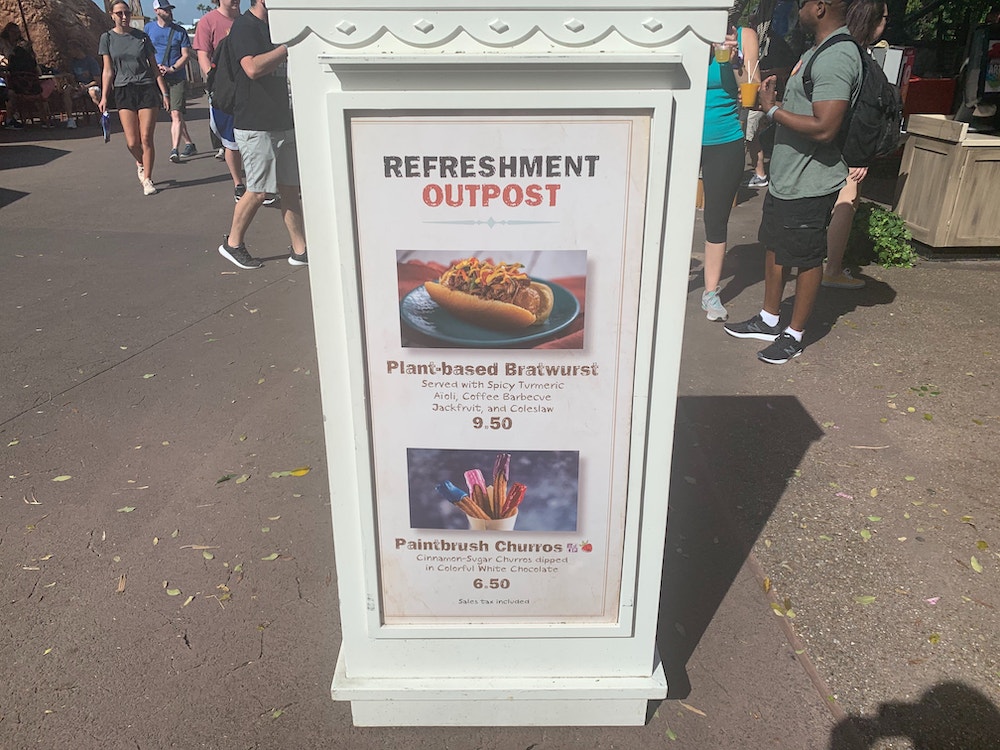 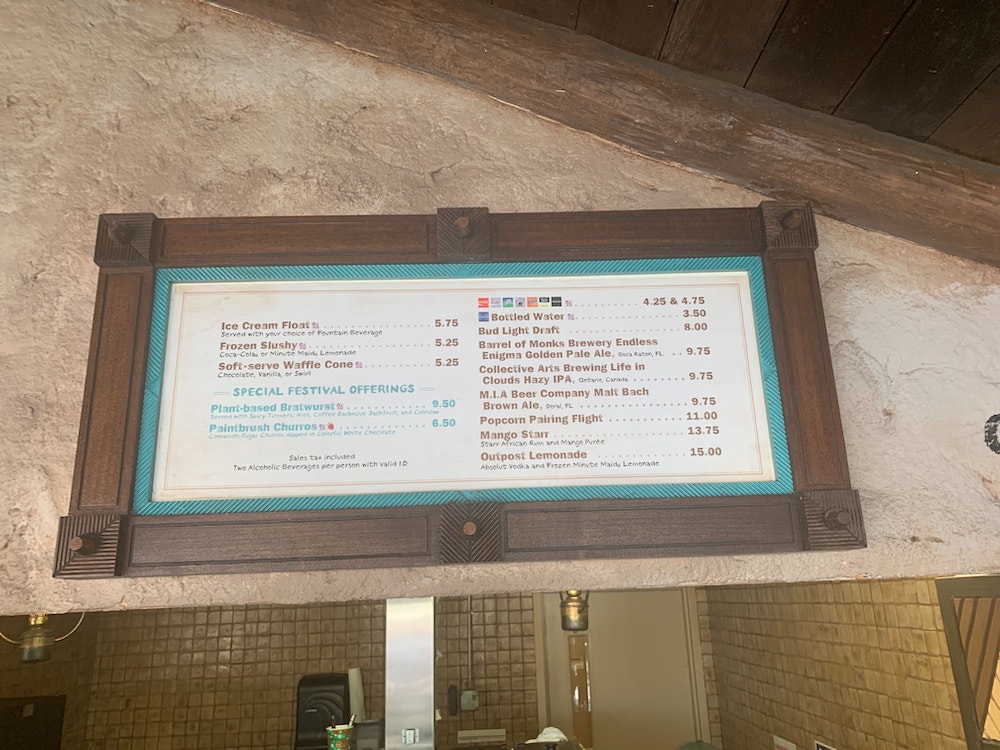 Admittedly, we were afraid when we read “spicy turmeric aioli”, but this vegan brat was quite tasty! The coffee barbecue jackfruit and coleslaw balances that spicy turmeric aioli we feared, and the brat itself was very flavorful.

The dish as a whole all worked well, and we were all impressed with this offering given the combination of unique ingredients.

From Barrel of Monks Brewery: “Endless Enigma is our tip of the hat to the hop heads amongst you. Although certainly not as hoppy as a typical west coast IPA, this uses several types of continental hops to give a hop bitterness that is firm but not harsh. It is light amber in color. The mouthfeel is refreshing, with lively carbonation and a rich head. The light malt backbone gives a mild sweetness balanced by a healthy dose of noble hops.”

From Collective Arts Brewing: “…We dialed in the Simcoe and Mosaic hops and malt balance to optimize this juicy IPA’s pleasantly fruit forward (think citrus and melon) taste and aroma. In keeping with the nouveau NEIPA tradition, Life in the Clouds is an unfiltered beer, neither overly-sweet nor bitter, with a pillowy mouth feel.”

From correspondence with M.I.A. Beer Company: “This smooth drinking 8.5% ABV Imperial Brown Ale has a pleasant roasty character to it that is backed by a slightly sweet flavor from the malts. This beer has a medium body and earthy yet subtle hop character. As we brewed this beer we played some classic Johann Sebastian Bach compositions.”

We were most excited about the bacon barbecue popcorn, but it turned out to be the blandest of the three. The flavor is there, but it is very faint, which isn’t what you expect from that flavor of popcorn. The pale ale is good too, a solid pale ale that’s fairly hoppy with a bit more body than your average pale ale. It pairs best with the buffalo bleu cheese popcorn.

The jalapeño ranch popcorn was somewhat bland too, spicy enough, but the ranch was overpowered by the spice. The hazy IPA was very good, a great example of the style and the best of the three beers.

The buffalo bleu cheese popcorn was our favorite as the flavors were pungent, but not overpowering, just what you would expect. However, it does not pair well with the malt brown ale, but that’s most likely because nothing would pair well with that beer, we all strongly disliked it.

The biggest problem with this flight was what you would least expect: the wind. We lost close to half the popcorn given the unique containers.

Refreshment Outpost is located on the World Showcase promenade, just over the drawbridge from China. You can find it at number 7 on the map below. 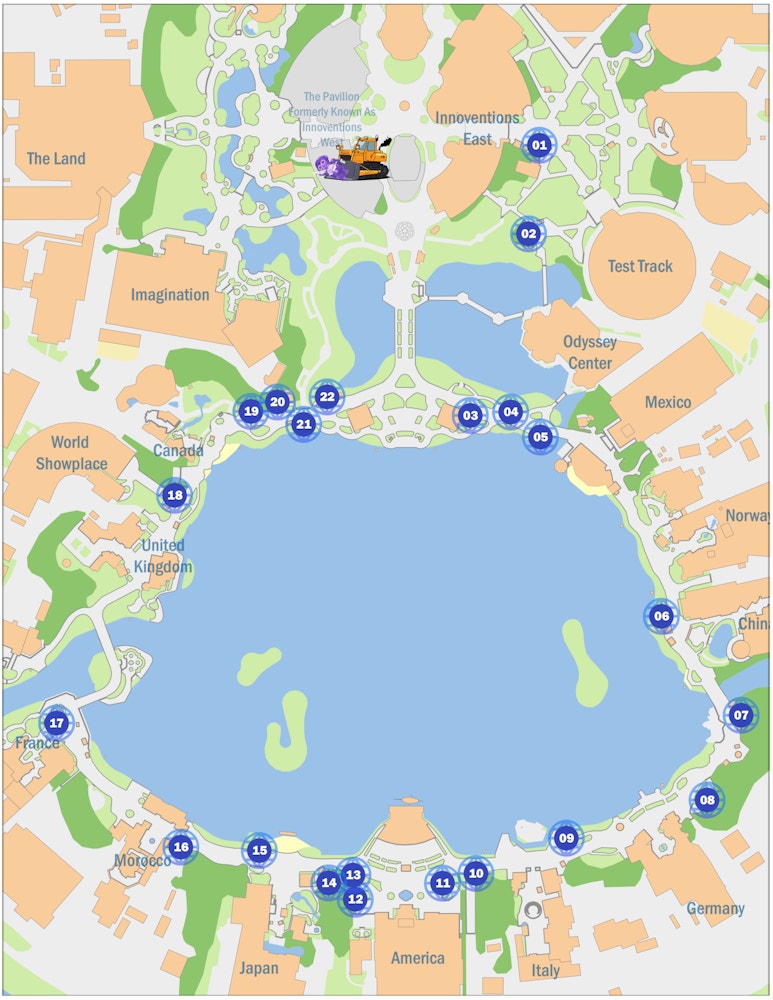 Jason has been a lifelong fan of the Disney parks since his first visit at age 2. His biennial pilgrimages during his childhood accelerated into semi-annual visits by the year 2000, when he also Joined the Disney Vacation Club. Luckily, Jason’s bride-to-be was also a Disney fan, which allowed his infatuation with the Disney parks to continue, and ultimately culminated in their wedding at Disney's Wedding Pavilion in September 2003. Early in 2007, Jason began his involvement with the planning for what became Celebration 25, the unofficial fan gathering to commemorate the 25th anniversary of Epcot®. Soon thereafter, Jason met Tom Corless at a pin trading meet in New Jersey, and became part of the WDW News Today podcast starting with Episode 17. Jason has been involved with the WDWNT Network ever since, and can't seem to escape no matter how hard he tries.
Contact Jason at [email protected]