“Sleeping Beauty Vinylmation! She is so cute! This is the first princess Vinylmation made! So exciting! :)” 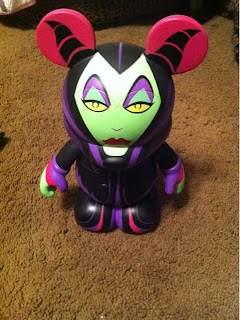 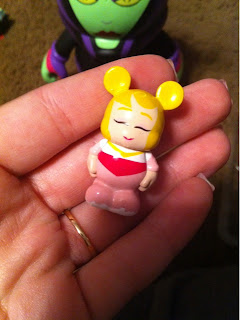 She purchased these at the Mission Viejo, CA store. They also had the Jumba/Stitch and Julius/Minnie combos on the shelf as well. The Villains 9″ + Jr combos are not scheduled to be released until March 21st according to a Disney Blog post and the Disney Events page. Looks like some Villains escaped early. Here is a list of the stores Disney announced will be carrying these Villains:
Stockton Street, San Fransico, California
Mission Viejo, California
Cherry Hill, California
Fashion Valley, California
Montebello, California
Santa Monica, California
International Plaza, Tampa, Florida
State Street, Chicago, Illinois
North Michigan Avenue, Chicago, Illinois
Freehold, New Jersey
Times Square, NYC, New York
Roosevelt Field, Garden City, New York
Northpark, Texas
Zoe has been collecting Vinylmation since Park 2. Her favorite is Ariel from Park 2. Here are some more great pictures she sent into us.

I think the Julius 9″ figure is much better than that of Maleficent. Julius being much more detailed, it definitely has more going on than Maleficent.