Update: Price now confirmed by photo of poster at D-Street!! 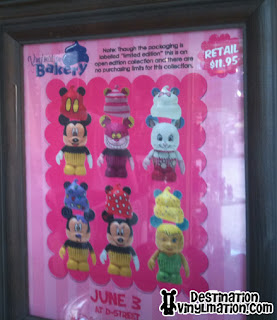 Update: 6/1/11 On Facebook, Kevin from CA, confirmed a price tag of $11.95. We assume that the price will be the same here in Florida. Once we get visual confirmation, we’ll let ya know! This is cheaper then I expected with all the extra vinyl, what do you think of the price tag??

Update: 5/19/11 Disney has announced a release date of June 3 at D-Street FL and CA. They also released pictures and an exciting reveal. 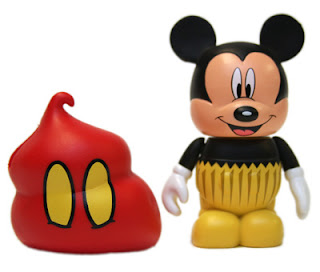 As some people have predicted, the icing is removable revealing the character’s head inside. Right now, we only have a picture of the Mickey with icing off, but they also released pictures of Cheshire Cat and Tinkerbell (see below). This set will be sold in open window boxes and was changed from being limited edition to an open ended production number. 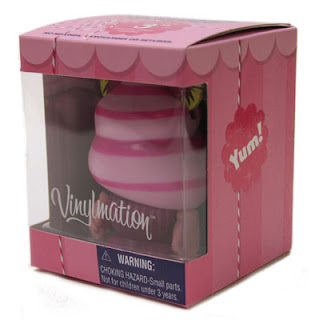 Update: 4/20/11 While looking at the Disney Vinylmation Vault today I noticed that they added Bakery to the list. This usually means that it’s out already, or that it’s really close to release. What do you think? Might it be out in a foreign Disneyland or will we get a surprise on Friday? Also we now know the artist is Susan Foy.

Update: 4/9/11 After a discussion in line at D-Street we pondered if the icing would be removable. Check out the discussion at Cute on the Inside?

4/7/11 How awesome is this? Today Disney added a sneak preview of the Bakery set to their Sneak page. And get this, The Mickey, Minnie, and Cheshire Cat look exactly like MC artistically rendered! First, they were cupcakes with frosting, like we imaged, and then they look very very similar! So check out the whole set, designed by Susan Foy, and let us know what you think! 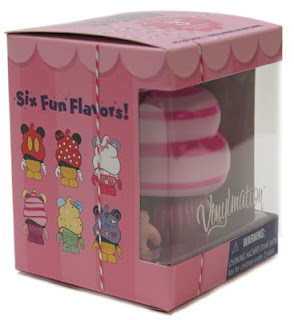 I wonder how they plan to do the icing? It looks like some kind of add-on that covers the entire head!

I love cupcakes and I love this set. I am guessing it will be an open window set. I can’t wait, finally a set where I want hem all.

bev, i think you are exactly right. i read on another site that the frosting can be removed to show the characters face

If the final designs turn out as cute at the art I’ll definetly pick up a set of these. I hope yall are right about the frosting being like a removable mask, if that’s the case then I’ll have to pick up a couple of Cheshires, he’s one of my wife’s all time fav characters.

Interesting concept. Like some of the comments above, I’m curious as to how they’re going to create it. I look forward to more information.

Disney, you HIT one out of the park. Cupcakes which I LOVE and the OLD MOLD!!!!!! I sure hope this is sold at disney stores too. I am going to Destin at the end of June and I don’t think I can convince my wife to drive 6 hours to D-street to pick these up. I want the ENTIRE set!

Great looking set!!! Old mold..even better!
I love the confetti Mickey.
I love them all!
I need them all!! :)

Great set- a little disappointed they did another Marie design- not a big fan of that character. I wish they did a bigger set with more characters. This seems like one of the smaller sets they’ve done in terms of the number of designs there are. Love the confetti Mickey.

I thought the last one wasnt a fail at all, hopefully the make a second series because of the pins they released. It pays off with the expression of mickeys face with the confetti

These looks really neat in person. Can’t wait until they come out–anyone know about the release date for these????

SO CUTE!
So Awesome
I love these and i really need at least one.
(The Cheshire Cat.):)

Price seems fair. after nerds… didn’t know what to expect. Like them a lot. will get all 6.

I think the price is Perfect. Thougfht they’d be more $$. I think the only Fail here is Tink. She looks chunky. I will still need to by it due to Tink being my Daughters Favorite.

Lol, Tink has clearly been noshing on too many of the cupcakes :)

I guess the price is o.k. It could be more, but really does it have to be any more than $9.95? I don’t think the extra vinyl justifies a price increase. Disney just knows that they can keep changing prices. I am sure we would all be amazed at how little it actually costs to produce these. I do love cupcakes and these are in the old mold, so I am going to try and get all 6. I hope these are released online tomorrow too, or at disney stores. I think if Disney waits too long to release them… Read more »

are these going to be released online?
disneymozart