2011 Year in Review: Claudia Remembers “A New Era in Collecting”

Each day this week, someone from the Destination Vinylmation staff will give their Top 10 list from 2011. The lists can include just about anything from figures to sets to headlines to personal moments. Please feel free to comment with your favorites and memorable stories from the past year as well. (Other lists: Nick, Annemarie, Zoe)

I have collected “things” ever since I could remember, but my collections have always been random… I began collecting stickers and erasers when I was a child. While in college, I loved anything Garfield. As an adult, I began acquiring Disney and Pixar items at a steady rate… but it was nothing like collecting VINYLMATION!

As we approach the end of this year, I would love to share with you what I call “NEW ERA OF COLLECTING: MY GREAT VINYLMATION EVENTS OF 2011.”

10. My First Vinylmation
My twin sister surprised me with a small gift in February 2011; it was a 3 inch figure that looked like Pinocchio. 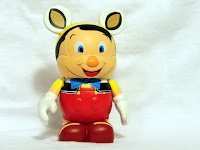 It was then that I was introduced to VINYLMATION! Needless to say, this was when my addiction for these little Disney figures began (and it was downhill from there for my wallet!).

9. Trading
I am a researcher, so naturally, I went online and looked-up everything I could about vinylmations. Thanks to Google, I found Destination Vinylmation. Everything I needed to know about vinylmations was in one entertaining website. It was there that I learned about the March Trade Event coming up at the Contemporary Resort within Disney World! The trade event was scheduled to begin at 6pm, but as an early bird, I arrived at 4pm. Sitting by the front door, I began to talk to other collectors, and found out that I was not alone with my obsession for these little guys. I was not there to trade, because my entire collection consisted of 2 Vinylmations (Pinocchio donkey ears, and Marie the cat); instead, I was there to learn about this new hobby and to make friends… and that is exactly what I did. The room filled very quickly, and between the pin and vinylmation collectors, it was a full house that night! I was on Vinylmation OVERLOAD! There were tables and tables FULL of Vinylmations…as far as my eyes could see. I heard some of the pin traders complaining about the “Vinylmation collectors’ invasion.” I had a blast, and after the event was over, I went home to make my list of “must-have” Vinylmations.

8. Camping for Vinyl
My first Vinylmation “camp-out” was on May 27 for the highly anticipated Disney Afternoon Duck Tales. Since I had missed out on the Talespin set, I was determined to get my hands on the Scrooge McDuck & Launchpad McQuack set. D-Street was not scheduled to open until 10:30am, but my gut feeling told me to get there extra early…so I arrived in Downtown Disney at approximately 6:45am to find a line of 15 people by the door. 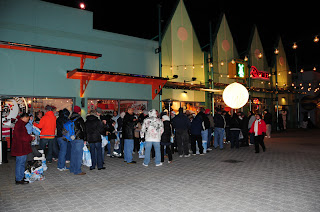 I quickly rushed to take my place, and began to talk to other people anxiously waiting in line. I was so happy to get this set, and it is now proudly displayed alongside my other DA sets. From all the Disney Afternoon sets, Duck Tales was the easiest one for me to acquire, because as popularity for the DA sets grew, so did the early lines (not to mention the Goof Troop online disaster).

7. Meeting the Artists
By the following trade event at WDW on May 20, my vinylmation collection had grown tremendously and I was more than ready to wheel-and-deal. I had my wish list in hand, and my “traders” neatly organized in several tackle-box trays. I had a blast…I was able to get many of the vinyls on my wish list, and made new friends. An added bonus was when I met the Disney Artist, Lisa Badeen. She was standing next to me at one of the trading tables, and a fellow collector was asking her to sign her vinyl… I was intrigued, and so I moved closer to listen-in… Apparently, Lisa was trying to trade a Vinylmation and the trader kindly asked for her autograph on one of vinyls she designed. Afterwards, I approached Lisa and congratulated her on her creative designs. Here are some of the vinylmations Lisa Badeen has designed: P1 Teacups, P3 It’s a Small World chaser, U2 Chocolate Mickey Bar, and U5 Pink Rock Star.

6. Customs
As my obsession for vinylmations grew, so did my desire to make my own customs. By the end of May, I had completed several retro-style Minnie & Mickey Mouse customs. To my surprise, they caught the attention of Destination Vinylmation’s founders, Nick and MC. They decided to do a “Spotlight” on my customs, and I was on cloud 9! Here is a link to the article in case you wish to read more about it: http://destinationvinylmation.com/2011/05/spotlight-on-custom-artist-claudia/. I also made a video of my customs in case you wish to view it: http://www.youtube.com/watch?v=HnxcvoUfBoc

5. Star Wars
When I heard that the Star Wars set was being re-released, I was so excited to get my hands on my very own case. As an added bonus to the release, the Disney Artist who designed this set, Mike Sullivan, was coming to Hollywood Studios for a signing event on May 28! I knew I could not miss this, so I quickly rushed through the crowds to buy my case and get in line. I picked out the 2 vinyls I wanted Mike to sign: Darth Vader and Obi Wan (he was signing 2 vinyls per person). 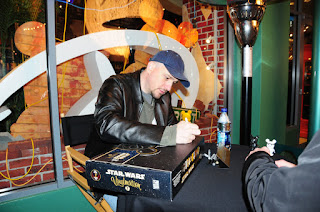 4. Pirates of the Caribbean
One of my favorite rides at the Magic Kingdom is Pirates of the Caribbean, so I immediately knew I was getting a full case of POTC once I knew of its release (July 1st). In addition to its release, the designer of this amazing set, Casey Jones, was present to sign his new creations. Here is more information, pictures, and video of the event: http://destinationvinylmation.com/2011/07/there-aint-no-party-like-a-pirate-party/

3. Up Figure Release
If you know me, you know that one of my top movies ever is Disney Pixar’s UP! So on June 24, I made sure to be 1st in line at the release of the 9 inch UP vinylmation. I arrived at D-Street at 5:30am, and I was over-joyed to find no one in line! As time grew closer to the store opening, I noticed that Maria Clapsis was standing across from D-Street. I immediately went over to Maria, and asked her what she was doing? She replied: “I am waiting to buy my UP vinyl.” I insisted that she go first, but she kindly refused by stating: “I don’t want to upset anyone who has been waiting in line.” I walked back to the store-front and asked the others if it would bother them to have MARIA CLAPSIS go first, and NO ONE objected. I then walked back to Maria, and insisted that she go first… Again, she kindly refused with the same reasoning as before. It was now 10:30am, and the doors were opened, but everyone in-line refused to enter before Maria Clapsis did. Finally, Maria caved-in and took her rightful place in-front!

2. Meeting Artist Randy Noble
On July 29, my family and I decided to go to Downtown Disney and mingle with the tourists. We ate some tasty food at the Earl of Sandwich, and afterwards, we walked over to the Art of Disney to find that RANDY NOBLE was doing a special appearance and signing to promote his new artwork. Fortunately, I had several of my Vinylmations with me, because you never know when a good opportunity will present itself; plus I also bring extras with me to trade at blind-boxes throughout Downtown Disney. So, I asked Randy if he would sign one, and he said “I can sign all of them if you like…” I was ECSTATIC! Here are a few pictures of that day: http://destinationvinylmation.com/2011/07/collecting-with-claudia-chance-meeting-with-disney-artist-randy-noble/

1. The Florida Project
My most amazing and exciting moment/event as a vinylmation collector this year has to be the Florida Project held on September 11 at the EPCOT Center. I arrived with my entire arsenal of vinylmations, and my two trusty assistants, my husband and my nephew. The lines were long, but they were moving fairly fast. 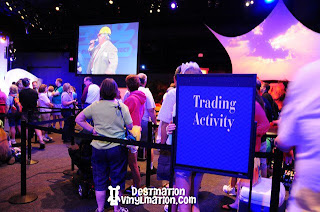 This was the MOTHER of all trade events. There were multiple trade boxes that were being filled with the best vinyls (variants, chasers, and the FL Project exclusive Orange Bird Cast Chaser). Along with the trade boxes, there were games, presentations, sneak peeks, and so much more. 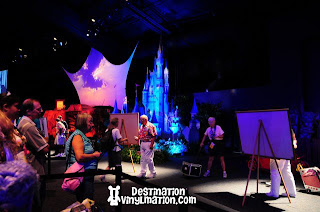 After trading multiple times at the trade boxes, I had the chance to meet with several of the Disney Artists and get their autographs: Maria Clapsis, Casey Jones, Monty Maldovan, Thomas Scott, Lin Shih, and Caley Hicks. They were gracious enough to sign my recently completed custom, which I call her “#1 Disney Fan.” If you would like to see a video of this, please go to: http://www.youtube.com/watch?v=OCycel9kI4c 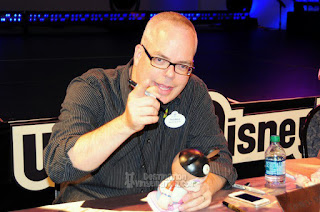 Once my vinyls were signed, I went over to the tables and set-up my trading display. As my family watched over my vinyls, I made my rounds amongst the other traders. I was able to acquire many of the missing pieces to my sets. However, it was getting increasingly harder to get the older pieces, because other people were doing the same thing. All in all, it was a great trading event…one I will NEVER forget!

Through my Vinylmation collecting journey, I have met so many wonderful people and have made long-lasting friendships. I am proud to say I am Vinylmation obsessed, and I don’t plan to quit any time soon.

I hope you all have a HAPPY NEW YEAR filled with chasers and variants!!!!!