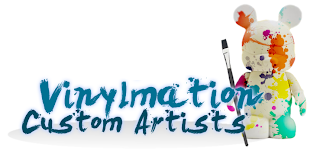 It’s time to feature a couple more customs from our contributor Annemarie.

Destination Vinylmation: You decided on Remy from Ratatuoullie for a 3″ custom Vinylmation. What drew you to this character?
Annemarie: We haven’t had any characters from Ratatouille appear on Vinylmation yet, and it’s one of my favorite Pixar films. 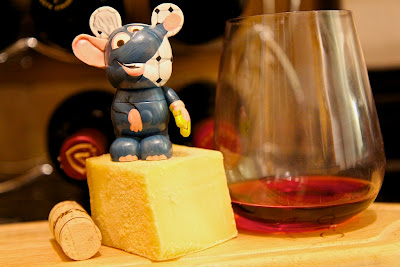 DV: You took a very unique approach to the design of Remy. Was that planned from the start or had you gone through many designs to get there?
AM: I figured if there was eventually a Remy figure, he’d probably be created facing frontward with both his ears in each of Mickey’s ears. I tried it out that way but it didn’t really capture his rat-ness, so to speak. I wanted to get that long snout and nose turned upward, the way a rat would look. 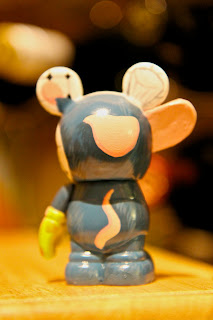 DV: It came out great, but it’s a risky choice to actually remove one of the Vinylmation’s arms and many collectors wouldn’t agree with that move. In your Roger Rabbit vinyl, you purposefully did not sculpt ears to to stay true to the Mickey mold. Why did you decide on more drastic steps to create Remy?
AM: I debated it, but in the end I thought using the actual arms as his arms would make them look too big. Remy’s arms are small and I wanted to keep them in that rat-like pose, so by shrinking the arm on the one side I could make it look like he’s holding a piece of cheese. 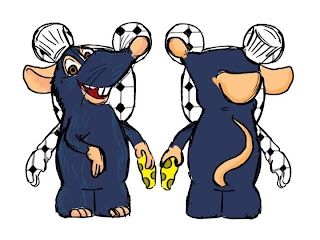 DV: In your concept art, its seemed you were going to paint the arm that you eventually removed as the kitchen tile. When did you change your mind?
AM: Two dimensionally, it worked great, but when I actually started to paint it out three-dimensionally and had to turn the figure around, it started to look strange from the side; not at all like it does from the front. There was no way I could really get it to look right, so rather than just leaving the arm white I decided to remove it completely. I don’t plan on making this a habit, but I think it was the right choice for this particular piece.

DV: The next custom of yours we will look at today is Micheal Jackson from Captain EO. What is more difficult for you, capturing the look of an animated animal or a human?
AM: Making a human face is definitely more difficult. I drew it out a few different ways but if I’d drawn his face more human-like it would have looked strange to me, so I made him into a bit of a more simplified caricature. 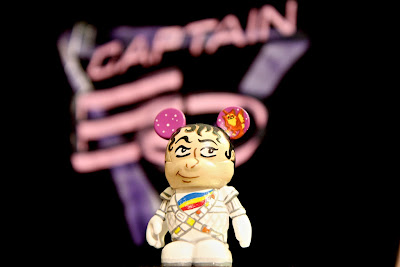 DV: The end result is a fantastic tribute to the King of Pop. Talk a little about Captain EO’s design and your favorite details of this figure.
AM: I would have liked to get Fuzzball more detailed but with the tiny ear I managed as best I could. Adding EO’s puffy shoulder-pads was a last-minute decision, and I think those are actually my favorite part… I think they make the piece. Another funny detail is I used glittery eyeliner on his rainbow shirt. You gotta use what you’ve got, right? 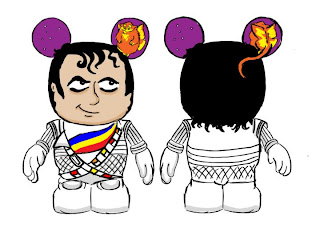 DV: Can you give us an idea of what’s on your drawing board for future creations?
AM: I don’t want to give too much away but I will say one of my projects is a six-piece set, and has to do with Disney nostalgia. I have two more Vinylmation projects on deck that are non-Disney as well.