Where: Disney Stores and D-Streets

Details: Each 3″ figure is scented relating to its name and design.

Update 5/29/12 In addition to Disney Stores on June 4, So Tasty will also release at D-Streets on June 8.

Update 5/25/12 The Vinylmation blog teased us with a few looks at the So Tasty line. I’m really starting to like the unique characterization of each.

4/21/12 – The DV Staff gives initial opinions on this series… before product shots are shown: 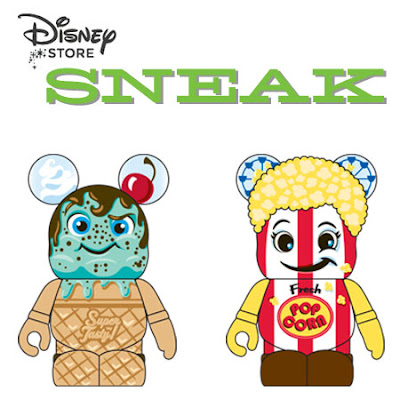 Nick: They are targeted toward a specific audience for sure, kids and female. I’d have to say the initial designs are not as cute as say some Cutesters or many of the “cutesy” designs by say Maria Clapsis. Elements of the popcorn design are very cool however. The “disco” hair accessory to represent bubbling popcorn and the Ferris Wheels in the ears to represent fair grounds. The scent idea is cool. (how are those Jingle Smells scents holding up by the way to those who bought them?) I think they will sell well, especially as open window (if they are).

Annemarie: I think these are really cute, and it’s a good idea, but I don’t think I’ll be purchasing them; I usually like to stick to Disney-related stuff, it has to really blow me away for me to branch out from that. I like the designs though, the detail and expressions keep getting better and better in these. If this is an open-box series and there’s a food item I particularly enjoy, I may pick one up. A blind box series? I’ll pass.

Zoe: After seeing the so tasty Vinylmation preview, I think they look super cute! I love the idea that they will smell, like how jingle smells were. I hope the scents smell good. Also I love the use of the popcorn on top of the head, looks almost like Goofy’s afro. I love the details on these and think they will do great in the stores! The mint chip ice cream is cute, and it’s my favorite kind of ice cream so I will definitely need that one! I can’t wait to see how the rest turn out! :)