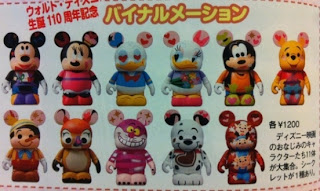 Rust pointed us to this auction on eBay. According to that auction this is a new Japan Disney Store series celebrating 110 years of Disney. No confirmation so far, but it’s an interesting set. Lots of hearts and magic. Lots of figures we’ve scene before, almost like a combination of sets. The Cheshire looks similar to ones we’ve seen before. The three little pigs are all on one vinyl, like they will be for the Nursery Rhymes set.

What are your thoughts?