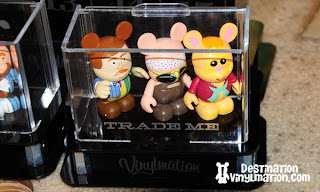 I’ve told the story many times. A few years ago, I walked past those Vinylmation display shelves and just itched to buy one. But the idea of not knowing what I would get was a foreign idea to me. So I kept passing. But one July day I walked into MouseGears and Disney had set up trade boxes behind the counter. I bought ten boxes that day. Then returned 3 times a week for months just to trade. We have just received word of a rumor of an internal memo sent to various merchandise locations at Walt Disney World stating that as of February 2, 2013 many locations around the resort will no longer offer trading. We have heard that no resorts and only the following locations will continue to offer trading: Emporium (Magic Kingdom), MouseGears and Disney Traders (Epcot), Villains in Vogue (DHS), Island Mercantile (DAK), D-Street and Disney Pin Traders (DTD).

So, we ask, is Trading at the parks dying? Please weigh in with your thoughts. This will be a feature on the next podcast so leave your comments here to be read on the show. Or, better yet, call 209-28-MOUSE and leave a voicemail to be played on the show.

n my opinion, it would be hard to bring back the “hey day” of park trading. With the abundance of sets, outlet discounts and general awareness, finding special or even needed figures at the parks for hard core collectors is next to impossible. There is however still merit for new or occasional traders. A friend of mine from New York had a blast finding figures he liked through park trading. But as fun as vinyl trading with Cast Members is, it never felt as smooth as pin trading.

There are both pros and cons to park trading. A pro would be guest interaction. But that comes at a cost. The boxes are at registers, so unlike pin trading, vinyl trading clogs up the lines. There is also more of a break in the work rhythm when a CM has to carry a box over to you as opposed to showing off a lanyard. I know I’d find it annoying as a worker. Another pro, is you introduce people to the product. Vinylmation has always had that “what is that?” factor. There are also those Random Acts of Kindness (RAK) where fellow collectors will leave behind valuable figures for others to find. Another pro would be Cast Exclusive traders. How fun is it to be on the lookout for a figure you know you can’t buy in the store? One more con would be the cost for Disney. We have seen our fair share of broken trade boxes. Replacing those can not be fun for the number crunchers that work for the mouse.

In conclusion, my thought is limited trading at the parks is not a bad thing. For the average guest, it will still provide an intro to the hobby. For the advanced collector, online trade groups fill that gap with excellence. Sure you can not trade your commons up for a more coveted figure, but those days have largely passed anyway. My worries lie in the lack of the bi-monthly trade events at the parks. Those, in my opinion, are more vital to the hobby than plastic boxes at the register filled with outlet vinyls.

P.S. As I put the finishing touches on this article while walking around Animal Kingdom this morning, I found a Mascot Donald in an open trade box. I excitedly traded for it so I have an extra to display with all my Donald stuff. So what do I know?!

It’ll be interesting to see what comes of this. Does anyone know of this happening at DLR? I think the abundance of good traders that are always right outside D-Street more than make up for this if it’s happening over here.

This makes me actually pretty mad we have a ton of pibs as well as vinylmations and the fact tbat we as guest spend a ton if money in this and love to trade as well as pins takung it away really burns me up. Its a fun family thing……I am off to write a letter to Disney because thus makes me mad.

If they do indeed reduce the number of trading locations, it will make my husband happy. I won’t be spending time, running into every shop I see to make a trade! Whenever I would trade, it always seemed like I was bothering the CM and holding up the line for other guests. This was especially true for the smaller stores that were staffed with fewer CMs. There were several times during my vacation, when the lines were delayed by groups of young kids who were trading a vinyl that they had just blind boxed and didn’t like, with one CM… Read more »

Trading boxes were what got me started on vinyl collecting. It would be a real shame to cut back or eliminate trade locations at the parks. On my recent WDW trip, added 8 new vinyls to my collection and upgraded another dozen. Adding 8 may not sound like much but having 600+ in my collection and being more finicky than in the past, that’s a good amount. By contrast, my son added 18 new to his collection. I sincerely don’t see the problem with vinyl trading. It doesn’t take long to trade with CMs and it shows good ambassadorship. Comparing… Read more »

I really agree. We do love pin trading as well buy we really live vinyls as well. It is so nice if you go alot to find other things to enjoy as well as things to do when it rains or when crowds are high….its a great way to interact and its fun family time. I wrote an email and sent it to Disney I suggest others do the same….a year of vinly and pin trading would be fun rather then a year of ears….and I would love for them to host more trading nights. I need to get in… Read more »

It cut me iff *lol* and not less…..lets hope thus is just another Disney rumor!

Oh, please, PLEASE do not stop the bi-monthly trade events! We went to our first one last July at the Contemporary and I’m planning on bringing a ton more Vinylmations with me for this July’s vacation. I’m on the west coast and our annual vacation is one of the very few times I make trade.

When I went to WDW in 2010 I saw lots of visible trade boxes — during my 2012 trip, it felt like there weren’t as many. I don’t know if that is true or not, but it didn’t seem like vinyls were being pushed as much. I really hope that they don’t limit trade locations. I’ll admit it — I’m frugal with my money. Buying something and not knowing what it is goes against how I act. BUT, knowing that I have the fallback of doing a trade, if I get something I don’t like, made me justify in my… Read more »

We were so looking forward to attending our first trade event and the way its looking we wont get to, or we will but it may be our last? :(

This is indeed true and will start Feb 1, 2013 at those locations listed above.

There’ is a petition against it as well… https://www.change.org/petitions/walt-disney-world-to-keep-the-mystery-boxes-at-the-disney-resorts-parks?utm_source=share_petition&utm_medium=url_share&utm_campaign=url_share_before_sign#supporters The only place I would say definitely remove a trading box is Serka Zong Bazaar. It’s always busy with the flow of exiting Expedition Everest riders and CMs are already occupied without having to do Vinylmation trading on top. Plus the till area is small, cramped and dark. However I wish they’d reconsider the amount of trading boxes. Really ought to be two in every park, especially where they are already large displays of Vinylmation. You buy a Vinylmation in the store, don’t like it? then trade it at the till.… Read more »

As trading decreases so will sales in my opinion. I realize that the boxes are overflowing with outlet vinyls but no one to blame with this other than Disney as they continue to over produce. With fewer trade boxes us frequent visiters will no longer need the outlet vinyls to trade. So go ahead and keep producing large numbers Disney and try to sale them at the outlet then. As an avid collecter of Disney pins and vinyls (10,000 pins and 2300 vinyls). My wife and I will be downgrading our Disney passes and be purchasing Universal passes when renewal… Read more »

Is this going to be the same for Disneyland as well? I was planning on going there in April.

I was recently at Disneyland and noticed that many of the mystery trading boxes had been replaced by clear trading boxes – which I don’t think is a bad idea. You can glance into the box and only line up if there is something in there that you want. This also gives people a good chance to trade away duplicates for, at least, a different vinyl. Having some mystery boxes around is great – gives the chance of getting a ‘treasure’ out of the box or a cast chaser – especially for the hard core collectors. I can understand Disney… Read more »

I’ve been thinking about this and I’ve decided I’m fine with them taking away some of the trade boxes at the parks. Trading in these boxes hasn’t been much fun as of late because they’re always flooded with the vinyls that are BOGO and you can’t really un-ring that bell at this point. As long as they have a couple places to do it and don’t do away with the trading events (where the real trading goes on anyway) this move doesn’t really bother me.

I have bad news about your Mascot Donald. He’s part of a new batch of clearance including Mascots, at least one Theme Park Favorites, and about half the series of D-Tours.

Oh, I know. But I like to have two of each Donald Duck. One for my sets and one for my Donald collection. I’d rather not pay for the second one and I like to get it in trade. I was just excited to find it in an open window trading box. My comment was more to the fact that I was surprised I can still be excited about a find in a park trading box!

They are not only taking away MOST of the boxes but also limiting the times that they will be available. This will in fact kill trading off for the most part. Sign the petition above and email Disney if you feel that trading is an important part of what it is to be a Vinylmation collector [email protected]

It’s true everyone. :( I Went to Magic Kingdom and Epcot this weekend and trading is pretty much done. Locations left I know of are: 1 Mk 1 Epcot 1 downtown disney. I heard one at each place from cast members I could not believe it. We walked up to see another family and by the time we got to pick we only had 2 numbers left. Very sad as being a pass holder this was our fun as a family.If trading is limited to this level I truly feel I will not be purchasing any more vinylmations. The search… Read more »